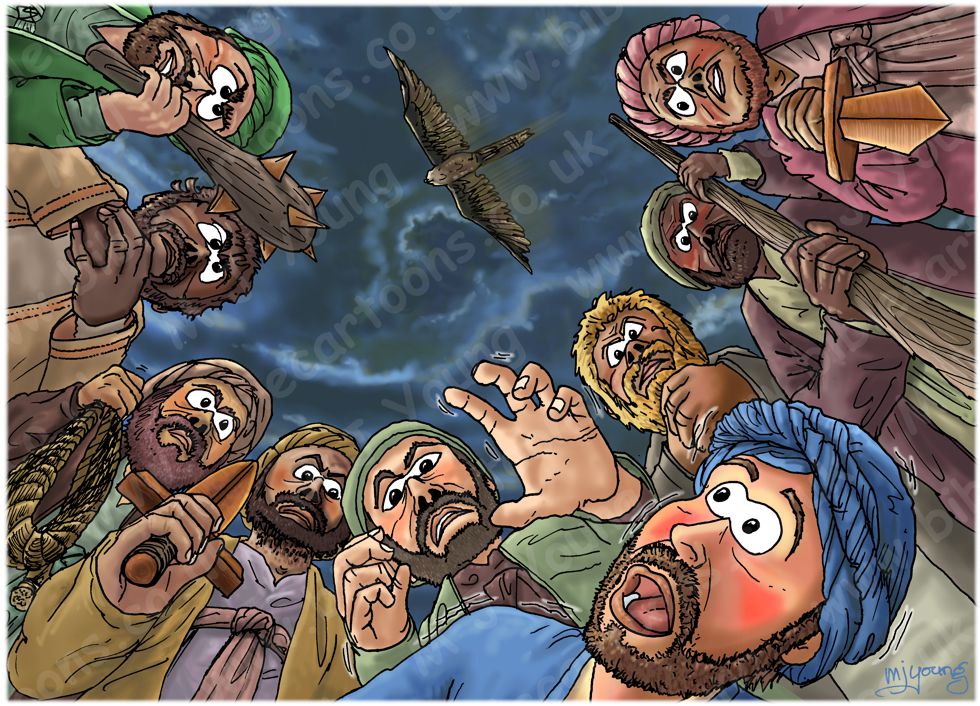 Matthew 21:38-39 (ANIV)
[Jesus said] 38 “But when the tenants saw the son, they said to each other, ‘This is the heir. Come, let’s kill him and take his inheritance.’ 39 So they took him and threw him out of the vineyard and killed him.

TIME OF DAY:
This is a story (parable) told by Jesus, so it has no particular time of day. I have established this scene as being late afternoon.

LIGHTING NOTES:
The sun (unseen on the left, peeping through the storm clouds) lights the left hand side of the figures, casting shadows to the right.

CHARACTERS PRESENT:
The landowner’s son is in the right lower foreground, looking terrified. He has fallen (or been pushed) to the ground, before being killed by the surrounding ring of tenant farmers.

RESEARCH/ADDITIONAL NOTES:
This scene has a very unusual (for me!) perspective: we are looking up at the ring of angry-looking farmers and terrified son, from a “worm’s eye” point of view. We saw the son moving towards darkening storm clouds in the previous picture (Matthew 21 – Parable of the Wicked Tenants – Scene 04 – Son sent). I have included very dark, foreboding storm clouds above this scene, which represents the son’s terrified and desperate condition, in which he is at the mercy of the entirely merciless tenant farmers. Notice the son is shaking in terror, signified by the shaky lines I have drawn around him!

As I drew in the previous scene, I have made the son’s beard quite sparse and thin, as I imagined him being quite young; not yet capable of producing a big, bushy beard like his father has! (see (Matthew 21 – Parable of the Wicked Tenants – Scene 01 and 04). The son is surrounded by some of the tenant farmers, looking menacing, with swords, a rope, and a wooden staff. There faces show expressions of hatred, cunning, and murderous intent.

Three of the tenant farmers we have seen in previous scenes; from left to right, the fourth, fifth and eighth ones. The fourth man (in brown outer robe, turban and lilac inner robe) and fifth man (in green outer robe and turban) we have seen in Scene 01, waving goodbye to the landowner. They also occur in Scene 02 and 03, where they are beating up and/or stoning the landowner’s servants, as does the eighth man (wearing pale burgundy pink outer robe and turban, and having that distinctive thin red beard).
In Scene 05 – Heir killed, we see the farmer in the green outer robe reaching down to grab the terrified son. His hand appears very large, due to the foreshortening effect of the perspective I have employed in this scene.

In the centre of the scene, but above the action, is the Falco cherrug (aka Saker Falcon) which appeared in the sky of Scene 01. I have applied motion blur to its outline, to give it a sense of movement across the sky.