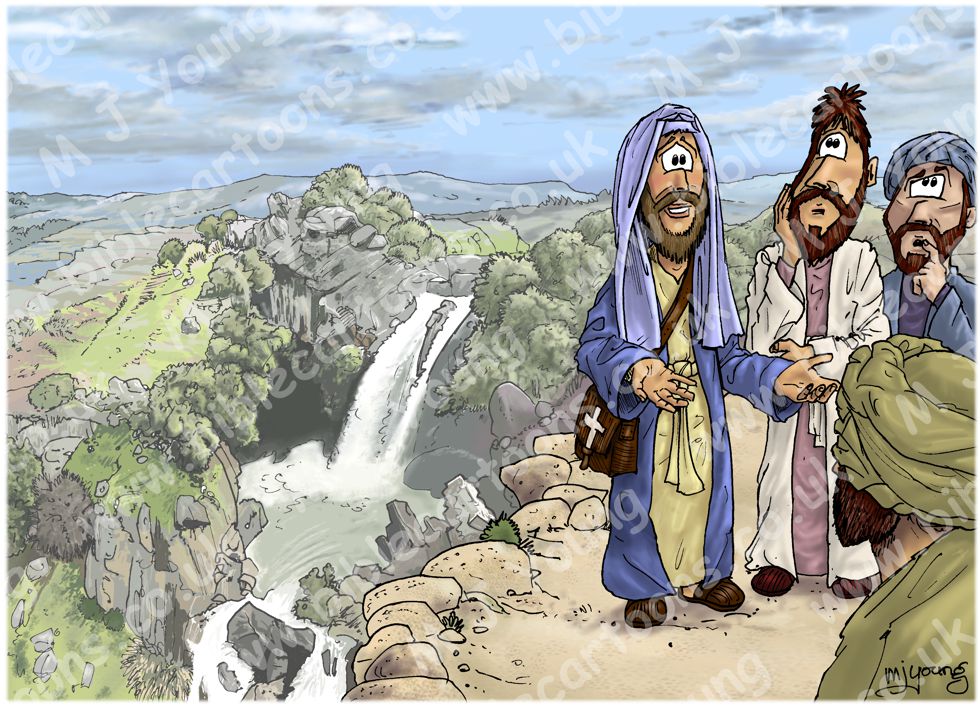 Matthew 16:13-14 (NLT)
13 When Jesus came to the region of Caesarea Philippi, he asked his disciples, “Who do people say that the Son of Man is?”
14 “Well,” they replied, “some say John the Baptist, some say Elijah, and others say Jeremiah or one of the other prophets.”

TIME OF DAY:
From the text it is uncertain what time of day the story is set at. I have set the time as mid morning, with the sun on the right (eastward).

LIGHTING NOTES:
The sun on the right of this scene provides natural warm sunlight & shadows on the left.

CHARACTERS PRESENT:
From left to right: Jesus, in blue outer robe, talking to Simon, Andrew. Batholomew/Nathaniel in the foreground (looking at Jesus).

RESEARCH/ADDITIONAL NOTES:
This scene is set above Caesarea Philippi, which was apparently the furthest north Jesus went in his earthly ministry.

I have drawn Jesus with a head scarf & bag over his shoulder, which shows that he & his disciples have journeyed during the day. I have never drawn a head scarf or bag on the Jesus figure before. Notice the pale cross shape on his bag.

In the middle background can be seen some waterfalls, which come from a spring near Caesarea Philippi. The water has eroded the local limestone into deep valleys & ravines in places.

Here’s the scene without the figures. I have removed the fading/ghosting layer, so you can see the scene at full colour strength. 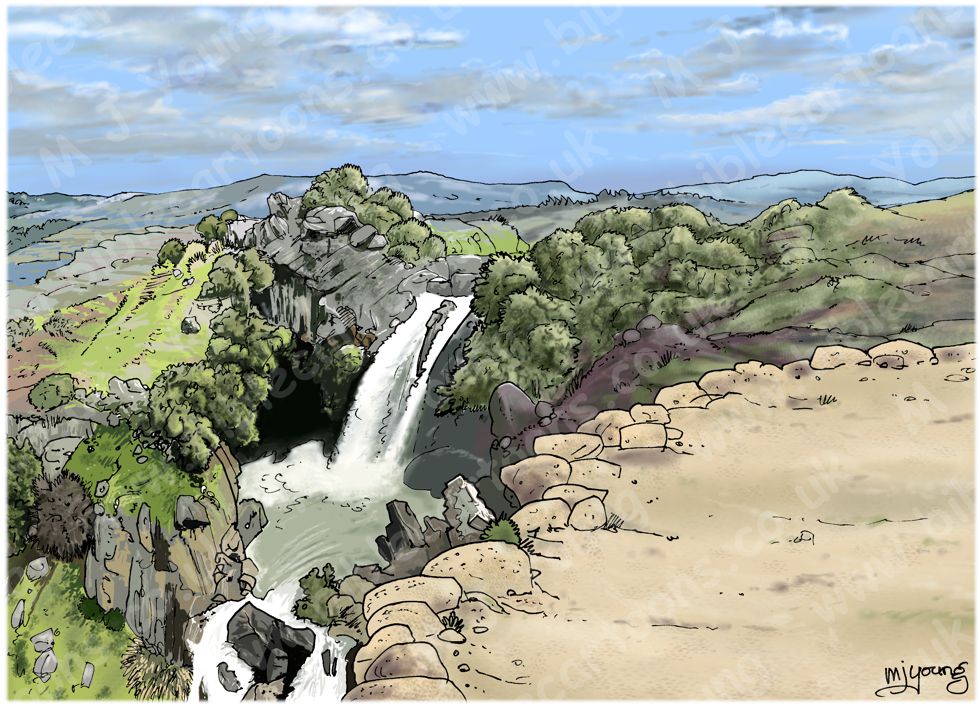 Caesarea Philippi
Caesarea Philippi *1 (Ancient Greek Καισαρεία Φιλίππεια) or Caesarea Paneas (Καισαρεία Πανειάς) was an ancient Roman city located at the southwestern base of Mount Hermon, about 25 miles (40.2 Km) north of the Sea of Galilee. The city is mentioned in the gospels of Matthew 16:13 & Mark 8:27, but is now an uninhabited ruin, an archaeological site in the Golan Heights. The surrounding region was known as the “Panion”.

Paneas (aka Banias) is a spring near the old city ruins, which also lies close to the fabled “way of the sea” (aka Via maris) mentioned by Isaiah,*2. This “way” is an ancient road or trade route. In the distant past a great spring gushed water from a cave in the limestone bedrock, which fed into the Huela marshes, which in turn fed the Sea of Galilee & The Jordan River. This spring is currently the source of the stream Nahal Senir. In the past the water flowed in a torrent, but now it only seeps from the bedrock below it. The abundant water supply made the region very fertile & therefore attracted settlers.

9 Nevertheless, there will be no more gloom for those who were in distress. In the past he humbled the land of Zebulun and the land of Naphtali, but in the future he will honor Galilee of the nations, by the Way of the Sea, beyond the Jordan—

2 The people walking in darkness have seen a great light; *
on those living in the land of deep darkness a light has dawned.

(* The great light refers to Jesus)

Via Maris is the modern name for an ancient trade route, dating from the early Bronze Age, linking Egypt with the northern empires of Syria, Anatolia and Mesopotamia — modern day Iran, Iraq, Israel, Turkey and Syria. In Latin it means “way of the sea.” It is a historic road that runs along the Palestine coast. It was the most important route from Egypt to Syria (the Fertile Crescent) which followed the coastal plain before crossing over into the plain of Jezreel and the Jordan valley.”
[Source: http://en.wikipedia.org/wiki/Via_Maris]