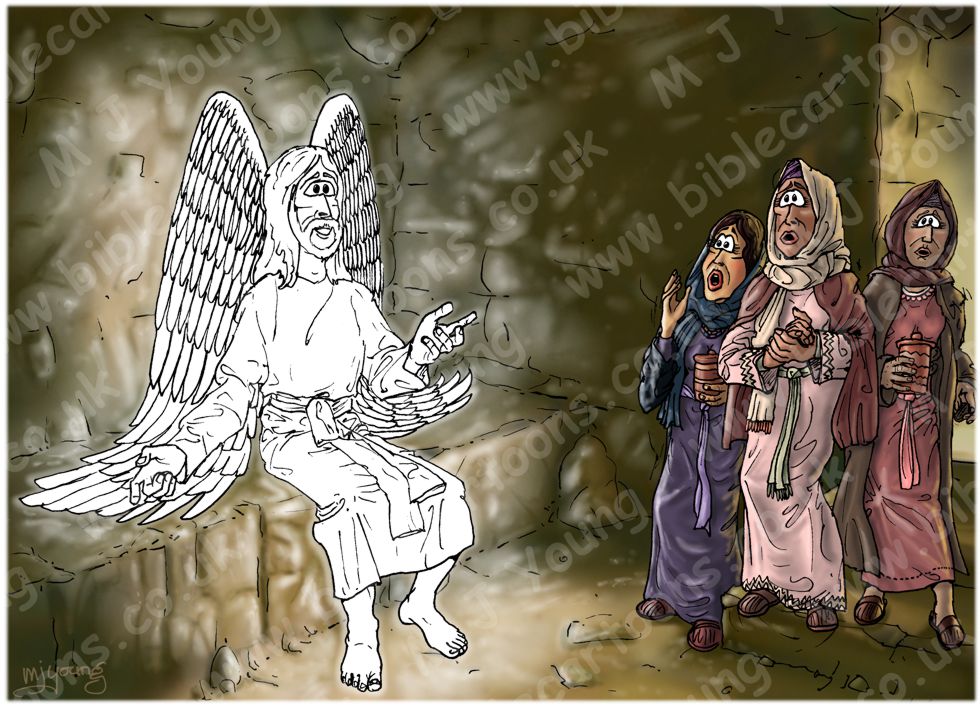 Mark 16:5-7 (NLT)
5 So they [the women] entered the tomb, and there on the right sat a young man clothed in a white robe. The women were startled, 6 but the angel said, “Do not be so surprised. You are looking for Jesus, the Nazarene, who was crucified. He isn’t here! He has been raised from the dead! Look, this is where they laid his body. 7 Now go and give this message to his disciples, including Peter: Jesus is going ahead of you to Galilee. You will see him there, just as he told you before he died!”

TIME OF DAY:
Verse 2 states, “2 Very early on Sunday morning, just at sunrise, they [Mary Magdalene and Salome and Mary the mother of James] came to the tomb.” This scene is set just as the sun is rising.

LIGHTING NOTES:
The scene would be very dark inside the tomb. I have dim yellow sunshine coming into the entranmce of the tomb, behind the women. The sun is on the left (east) of the scene, even though we can’t see it inside the tomb!
The main light source for this scene comes from the white glow of the “a young man clothed in a white robe.” which verse 6 informs us is an angel.

I have deliberately drawn the angel much taller than the women in the scene, although that may be a little difficult to appreciate, since he is sitting down! I liked drawing his wings bending outwards from his sitting position, they extend along the rock ledge on which the body of Jesus lay, in the confined space of the tomb. The angel’s heavenly glow provides the dominant light source in this scene. There are shadows on the stone steps leading down into the tomb & on the rock walls, all of which are extending away from the light source which is the angel.

I have established the skin, hair & some of the clothing colours in previous scenes for the three women. I like to keep the same characters in the same clothes & colours to maintain continuity between the various scenes that make up a narrative series or set of pictures.

I used the same background I created for “Mark 15 – Burial of Jesus – Scene 04 – Laid in the tomb (Dark version)” for this scene, but have adjusted the colours, brightness & contrast to create a colour scheme which (hopefully) creates the sense of very early morning sunlight.