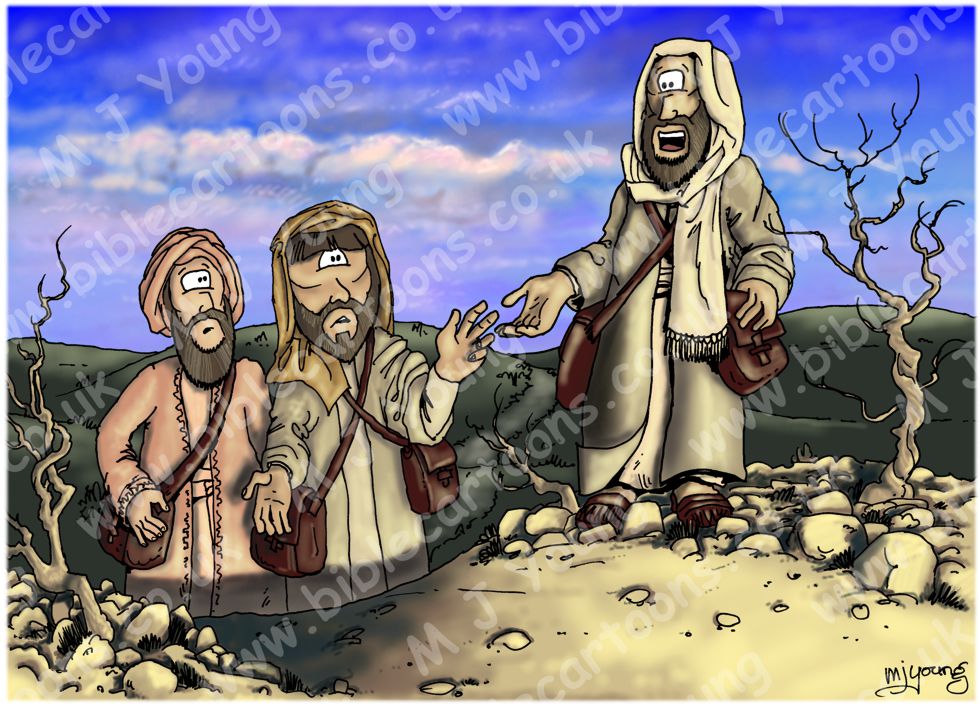 Luke 24:13-27 (NLT)
The Walk to Emmaus
13 That same day two of Jesus’ followers were walking to the village of Emmaus, seven miles [1] from Jerusalem. 14 As they walked along they were talking about everything that had happened. 15 As they talked and discussed these things, Jesus himself suddenly came and began walking with them. 16 But God kept them from recognizing him.
17 He asked them, “What are you discussing so intently as you walk along?”
They stopped short, sadness written across their faces. 18 Then one of them, Cleopas, replied, “You must be the only person in Jerusalem who hasn’t heard about all the things that have happened there the last few days.”
19 “What things?” Jesus asked.
“The things that happened to Jesus, the man from Nazareth,” they said. “He was a prophet who did powerful miracles, and he was a mighty teacher in the eyes of God and all the people. 20 But our leading priests and other religious leaders handed him over to be condemned to death, and they crucified him. 21 We had hoped he was the Messiah who had come to rescue Israel. This all happened three days ago.
22 “Then some women from our group of his followers were at his tomb early this morning, and they came back with an amazing report.
23 They said his body was missing, and they had seen angels who told them Jesus is alive! 24 Some of our men ran out to see, and sure enough, his body was gone, just as the women had said.”
25 Then Jesus said to them, “You foolish people! You find it so hard to believe all that the prophets wrote in the Scriptures. 6 Wasn’t it clearly predicted that the Messiah would have to suffer all these things before entering his glory?” 27 Then Jesus took them through the writings of Moses and all the prophets, explaining from all the Scriptures the things concerning himself.

TIME OF DAY:
Verse 29 tells us that “…it was getting late” after Jesus spoke to these 2 disciples/followers.

LIGHTING NOTES:
East is directly behind the scene, therefore the setting sun (going down in the west) is behind the viewer, bathing the scene in golden/orange light.

RESEARCH/ADDITIONAL NOTES:
The account of 2 disciples meeting the resurrected Jesus Christ on the road to Emmaus is fully documented in Luke, whereas it is briefly outlined in Mark’s gospel (Mark 16:12-13) & not mentioned by Matthew or John at all. We know that one of these disciples was Cleopas (possibly also called James, son of Alphaeus.) Who was the 2nd disciple? Many learned men, both ancient and modern, believe him to be Luke himself.

Where is Emmaus? There are many possible locations for this place & there is some doubt about it’s exact location. We know from the scripture that it was a village, approximately 7 miles (11.2 km) from Jerusalem. It seems at least possible that he modern village/town of Abu Ghosh could be the Emmaus of Luke’s account. That is where I have assumed the story is based. I have selected a site on Google earth at the following location & orientation:
21°48’05.18” N 35°07’47.10” E looking due east. Over the hills in the background is Jerusalem, with the Dead Sea beyond that, approximately 20 miles (32 km) away.

I took a photo of the evening sky the other day & have used it to design the sky of this cartoon. I’m pleased with the sunlight & shadows in this cartoon.