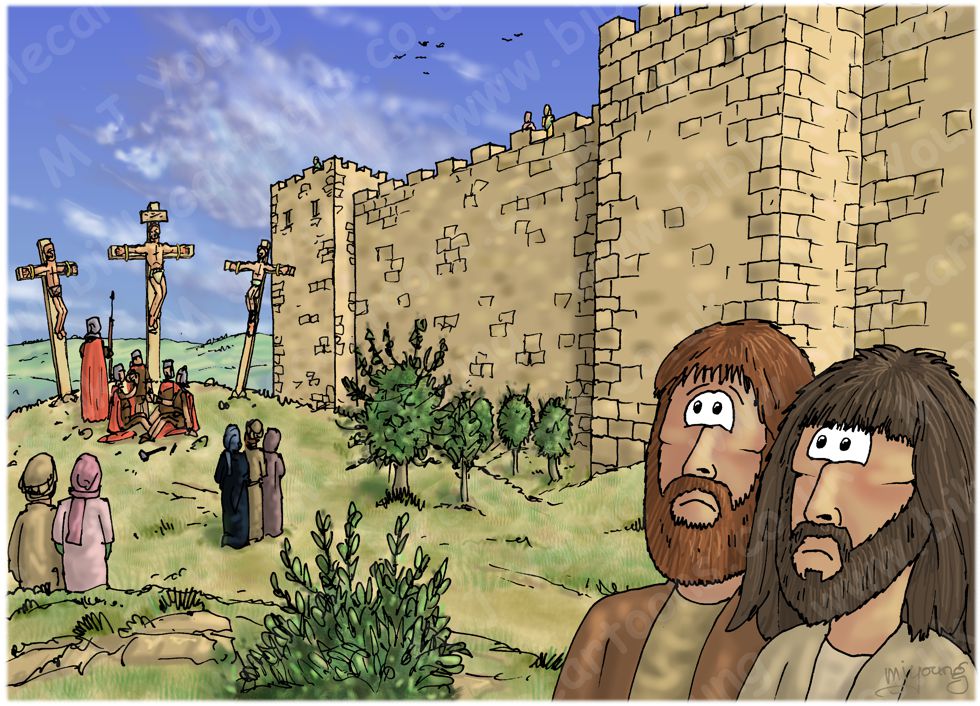 Luke 23:49 New Living Translation (NLT)
But Jesus’ friends, including the women who had followed him from Galilee, stood at a distance watching.

TIME OF DAY:
A little after 3pm.

LIGHTING NOTES:
Verse 44 tells us that “By this time it was about noon, and darkness fell across the whole land until three o’clock.”
I have assumed that after Jesus died, the light returned to the land. In this scene, the afternoon sun (behind the viewer & to the right) is again illuminating this scene, casting shadows to the left of people & objects.

RESEARCH/ADDITIONAL NOTES:
This scene is set outside the walls of Jerusalem. A section of the wall with two towers can be seen in the background.

The execution of Jesus occurred on a hill/outcrop named Golgotha [1].

I have included a few small shrubs/trees, which are Olea europaea (aka Olive tree). There are a lot of these trees around the city of Jerusalem.

[1]
Golgotha, (Aramaic: “Skull”) also called Calvary, (from Latin calva: “bald head” or “skull”), skull-shaped hill in ancient Jerusalem, the site of Jesus’ crucifixion. It is referred to in all four Gospels (Matthew 27:33, Mark 15:22, Luke 23:33, and John 19:17). The hill of execution was outside the city walls of Jerusalem, apparently near a road and not far from the sepulchre where Jesus was buried. Its exact location is uncertain, but most scholars prefer either the spot now covered by the Church of the Holy Sepulchre or a hillock called Gordon’s Calvary just north of the Damascus Gate.
[Source: Encyclopaedia Britannica]