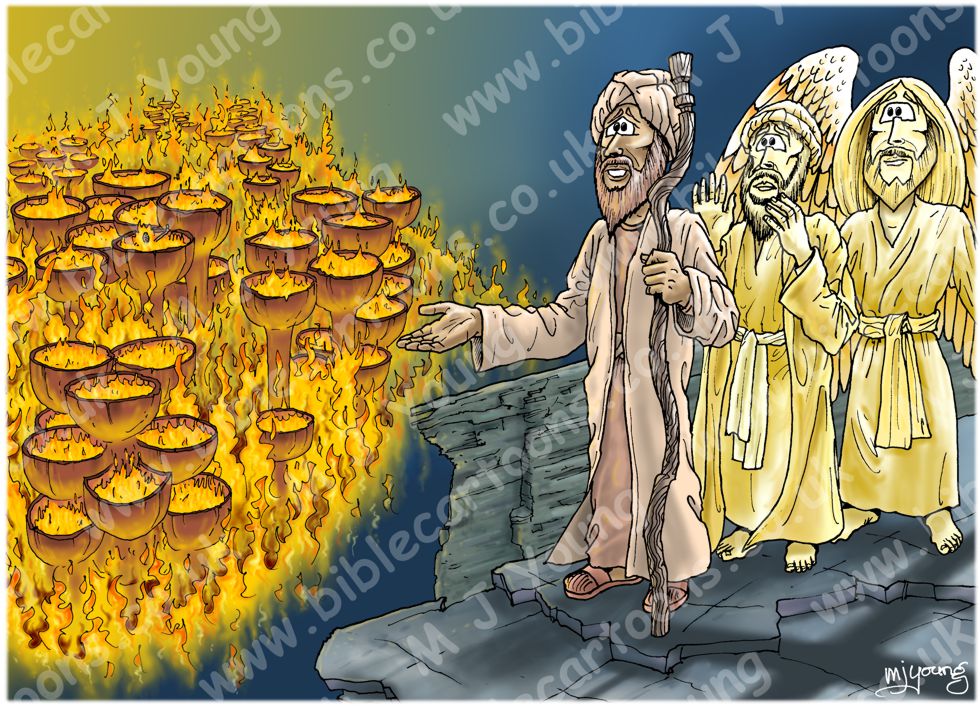 Luke 16:25-26 (NLT)
[Jesus said] 25 “But Abraham said to him [the rich man in hell], ‘Son, remember that during your lifetime you had everything you wanted, and Lazarus had nothing. So now he is here being comforted, and you are in anguish. 26 And besides, there is a great chasm separating us. No one can cross over to you from here, and no one can cross over to us from there.’ “

LIGHTING NOTES:
The bright light from heaven provides top lighting from the right in this scene, whilst the yellow/orange flames of hell cast a warm glow onto the foreground figures.
Notice the shadow of the cross of Jesus on the foreground rocks. You can see the source of the shadow in the last scene in this series (Luke 16 – Rich man & Lazarus – Scene 05 – Cross).

CHARACTERS PRESENT:
The soul/spirit of Abraham in heaven, talking to the rich man across the great chasm, with Lazarus & one of the angels who carried him to heaven behind.
The soul/spirit of the rich man, just visible in the middle series of “cups”, his face & arm outstretched towards Abraham & Lazarus. [See close-up at bottom of this page.]

RESEARCH/ADDITIONAL NOTES:
There are 2 versions of this scene:
1) The Colour version
2) The Blue version (see next Bible Cartoon)
The Colour version has full colours displayed, without the darker blue shadow overlay across them. The result is a more colourful rendering of the scene than the Shadow version. Colour is more important than tone (light & shadow) in this version. The cast shadow of the cross on the foreground rocks is rather more subtle in this version than in the Blue version.

This was a challenging scene to draw. I had the idea of “cups” of fire arranged in tiers, in Hell, each one holding a person, quite a long time ago. This is the first time I have had a chance to illustrate that idea. It has taken me quite a long time to draw & colour this intricate scene.

The great chasm mentioned in the above Bible verse is represented by the dark blue colours between the rocks in the foreground & the fires of Hell in the background.

I like to maintain the skin, hair & clothing colours that I have established in previous cartoons, so as to maintain continuity between stories. In this case, I had already established the colour of Abraham’s skin, hair & garments from an earlier Bible Cartoon (see Genesis 22 – Abraham & Isaac – Scene 03 – Sacrifice (version 01)). I have made these colours lighter, being in heaven now, than those of Abraham’s earthly life. The colours of the angel & Lazarus come from the previous cartoon in this series: Luke 16 – Rich man & Lazarus – Scene 03 – Angels. 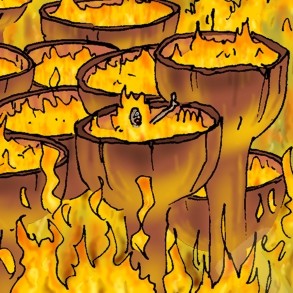