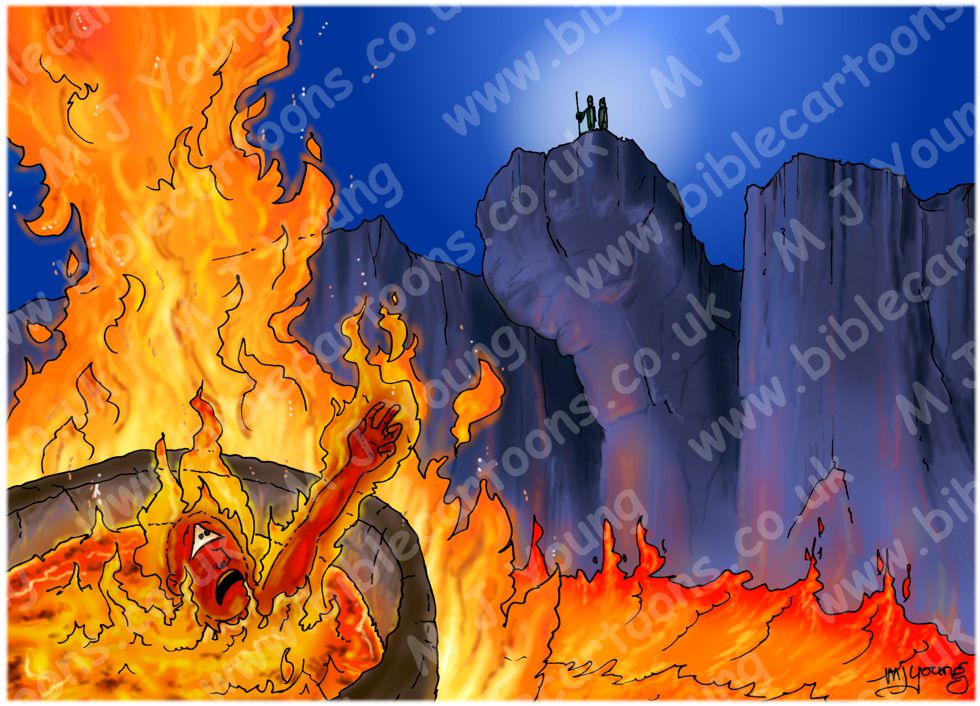 Luke 16:24 (NLT)
“The rich man shouted, ‘Father Abraham, have some pity! Send Lazarus over here to dip the tip of his finger in water and cool my tongue. I am in anguish in these flames.’

TIME OF DAY:
There is no specific time of day for this cartoon.

LIGHTING NOTES:
The main lighting in this cartoon comes from the flames of hell. There is also a cooler, bluer glow around Abraham & Lazarus in the background.

CHARACTERS PRESENT:
Abraham (holding a staff in his hand) & Lazarus, in the background. The un-named rich man, in the flames of hell.

RESEARCH/ADDITIONAL NOTES:
There are 2 versions of this scene:
1) The Colour version (see previous Bible Cartoon)
2) The Blue version
The Blue version strongly contrasts the yellows, oranges & reds of the fire with the blues & purples of the rocks, sky. Note also the “halo” of white light above the figures of Abraham & Lazarus, standing on top of the rock chasm that separates Heaven from Hell.

Jesus’ parable talks about the value of money in light of future judgment. Jesus is talking in this parable about the Pharisees’ attitude toward money (which we know from verse 14 that they “dearly loved” it). At first glance this seems like a strong story about wealth, almost as if Jesus is saying that it is wrong to have money. But perhaps it was not the rich man’s wealth which Jesus is pointing at as being “wrong”, but rather his attitude, specifically the rich man’s blatant disregard for Lazarus’ welfare, whilst both men lived upon the earth. The rich man could easily have given Lazarus food from his table, since he had plenty. Upon both men’s deaths, the roles they played in life are reversed. For all eternity: the God-fearing Lazarus, who had very little comfort on earth, goes to bliss, plenty & comfort in heaven, whilst the rich man, who had everything on earth, goes into the flames of hell, for eternal torment. This aspect of role-reversal might have unnerved the Pharisees listening to Jesus’ parable, since, to them, wealth was a sign of God’s blessing, poverty a sign of God’s disfavour. Jesus brought a new teaching & a new way of viewing one’s earthly possessions: the proper use of our wealth is in the alleviation of suffering of all those we come into contact with in this life. It is not merely our possession of wealth that God will judge us by, more so, it is how we have used that wealth: for our own pleasure, or for the benefit of other people’s welfare. The Pharasee’s enjoyed their wealth and did not attempt to bridge the chasm that separated them from the poor. But Jesus’ parable was explaining that another chasm would develop, after death, and that they would find themselves on the wrong side of it, for all eternity.

Regarding the great chasm itself, we read from this parable (verse 26) that no-one can cross over it. The chasm separates those people who have chosen heaven & those people who have chosen hell. We only get to live one life on this earth, and it is here that we make our eternal decision. People cannot wait until after they die to make their relationship right with God, by then it will be too late. God’s judgment of them will have been made on the basis of their choices on earth, whilst they were alive. And once that judgement is made by God, it will be irreversible. Our ultimate judgement & where we will spend eternity is based on our acceptance or rejection of Jesus Christ as our Lord & Saviour. That decision cannot be changed once we die. God’s decision upon death is final.

Fortunately for each & every one of us, it is easy to choose heaven over hell! We read from many other passages in the Bible that…

Acts 3:19 (ANIV)
Repent, then, and turn to God, so that your sins may be wiped out, that times of refreshing may come from the Lord,…

1 Peter 3:18 (ANIV)
‘For Christ died for sins once for all, the righteous for the unrighteous, to bring you to God.’

John 5:24 (ANIV)
(Jesus himself said) “I tell you the truth, whoever hears my word and believes him who sent me has eternal life and will not be condemned; he has crossed over from death to life.”

From these (and many more) scriptures it becomes clear that if we chose to repent of our past sins & believe in Jesus Christ as the only means of our eternal salvation, then we can avoid hell & eternal separation from God, & live a God-centred & God-pleasing life here on earth, confident that Jesus has transferred us from hell into heaven.

It is interesting to note that the rich man in Jesus’ parable recognised that in the flames of hell there was no escape for himself. His thoughts turned to his five living brothers. He requested that Lazarus be sent to them to warn them to repent and change the direction of their lives. However, Abraham’s answer must have been a surprise: “They have Moses and the Prophets; let them listen to them” (Luke 16:29). In other words, they, like us, have the Holy Bible (the Word of God.) If they would not listen to God’s Word, “They will not be convinced even if someone rises from the dead” (Luke 16:31.) Interestingly, we know from history that the resurrection of Jesus himself (which was witnessed by over 500 people) did not change the minds of the Pharisees. It is an historical fact that Jesus Christ was resurrected from the dead; he ascended to heaven… he did exactly what he said he would. Even when Jesus accomplished this astounding feat, many people refused to believe him. Still many more, in the 2,000 years that have followed that event, have stubbornly refused to believe in Jesus Christ.

In the end, it is our choice where we go to, once we die. God does not send anyone to hell: they send themselves, based on what they “do” with Jesus. If a person chooses to believe in Jesus (as Lazarus, in this parable did) then he/she will go to heaven. If, on the other hand, they choose to reject Jesus, then they will inevitably go to eternal separation from God, in hell. God gives us freedom of choice. It is up to each & every one of us to choose where we would like to spend eternity.

If you would like to read more about how to accept the free gift of eternal life in Jesus Christ, & how to become a Christian, then visit the Links page above. Click on the “Ministry web site” links for more information. Please also consider e-mailing me for further information or discussion. 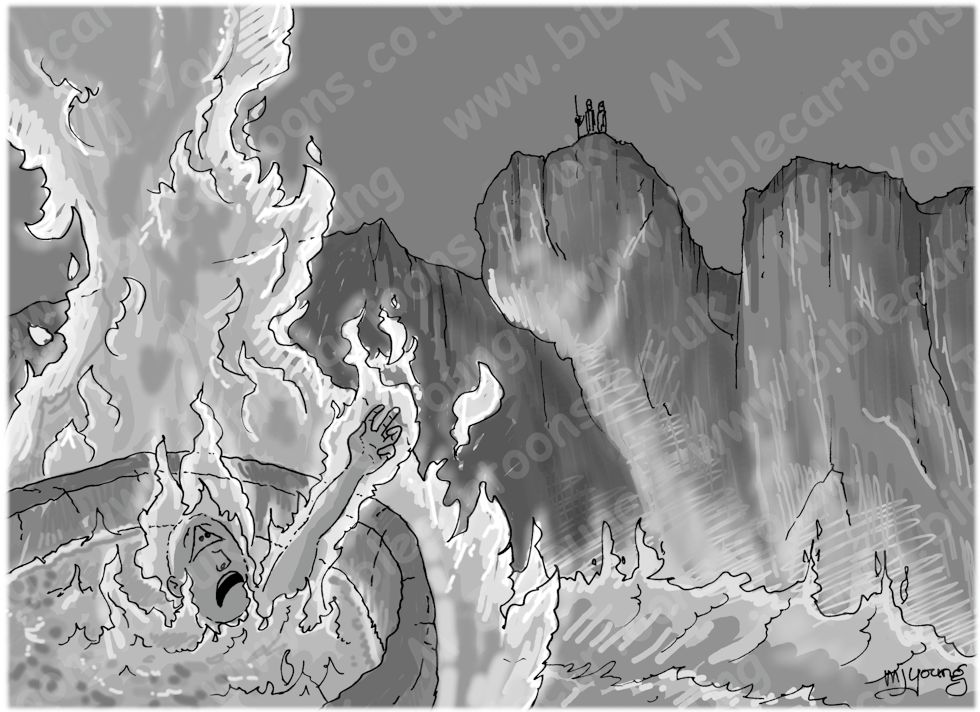