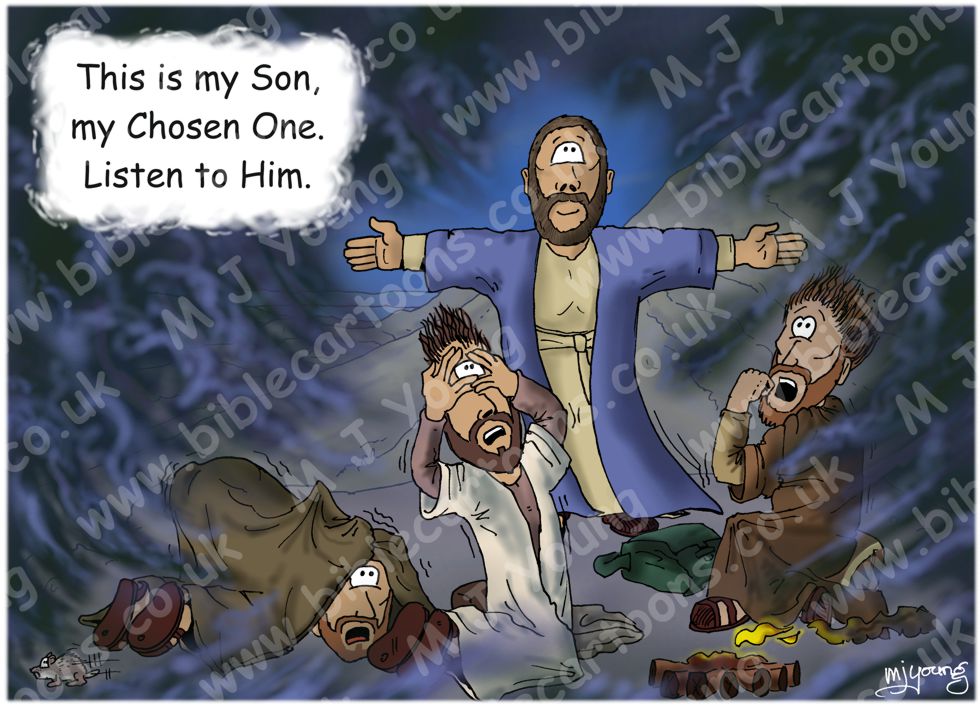 Luke 9:34-35 (ANIV)
34 While he was speaking, a cloud appeared and enveloped them, and they were afraid as they entered the cloud. 35 A voice came from the cloud, saying, “This is my Son, whom I have chosen; listen to him.”

Sunrise: natural sunlight, diffused by the cloud. Campfire being blown out!
Although the same story, read in Matthew 17:1-13, refers to “a bright cloud” I decided that a dark cloud would provide more drama & contrast with the rising sunlight.

CHARACTERS PRESENT:
Jesus, Simon/Peter, James (son of Zebedee), John (son of Zebedee), Snow vole.
The voice of God the Father is here represented in written text… one of the limitations of a cartoon is that there is no audio!
The scripture clearly states that the disciples “were afraid as they entered thye cloud” – hence their expressions in the cartoon.
Jesus has his arms outstretched in a gesture that foreshadows his evenual crucifixion, which is what Moses & Elijah were discussing with him in the previous scene. we know this becuase the Bible states: “They [Moses & Elijah] spoke about his [Jesus] departure, which he was about to bring to fulfilment at Jerusalem. I did not illustrate Jesus with a worried expression at the prospect of his own death, since He already knew what was going to happen to Him, & in this scene He is closely communing with God the Father in the cloud.