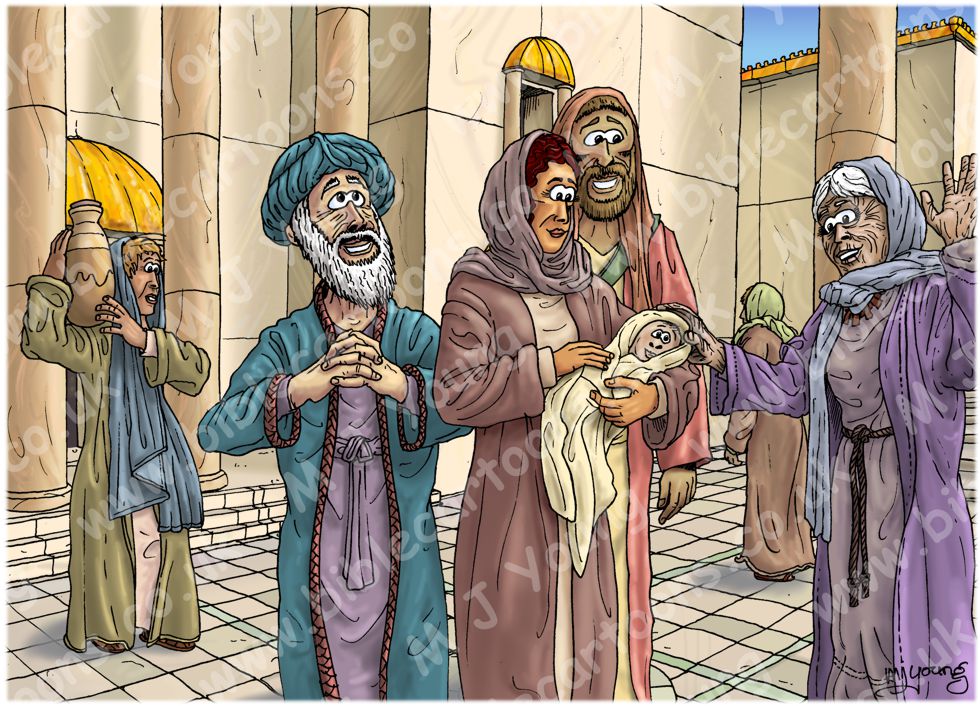 Luke 2:36-38 (NLT)
The prophecy of Anna
36 Anna, a prophet, was also there in the Temple. She was the daughter of Phanuel from the tribe of Asher, and she was very old. Her husband died when they had been married only seven years. 37 Then she lived as a widow to the age of eighty-four. [1] She never left the Temple but stayed there day and night, worshiping God with fasting and prayer. 38 She came along just as Simeon was talking with Mary and Joseph, and she began praising God. She talked about the child to everyone who had been waiting expectantly for God to rescue Jerusalem.

[1]
Or, She had been a widow for eighty-four years.

CHARACTERS PRESENT:
Mary (the mother of Jesus) is holding Jesus, with the prophet Anna who is resting her hand on Jesus head & praising God. Joseph (husband of Mary) is behind them, with Simeon to the left of the group.
Behind the group are several women.

RESEARCH/ADDITIONAL NOTES:
This scene takes place in the court of the Women (in the grounds of the Temple of Jerusalem) a few moments after the previous one. I have demonstrated that Anna the prophet is very old with lots of lines and wrinkles on her skin, and with white hair, much like Simeon.

Since this scene occurs in the same place and virtually at the same time as the previous one (Luke 02 – Prophecies about Jesus – Scene 03 – Simeon’s blessing) I thought I’d save myself some time by using the same background.

See notes in Scene 01 – To Jerusalem, for notes about the nature of the sacrifice.