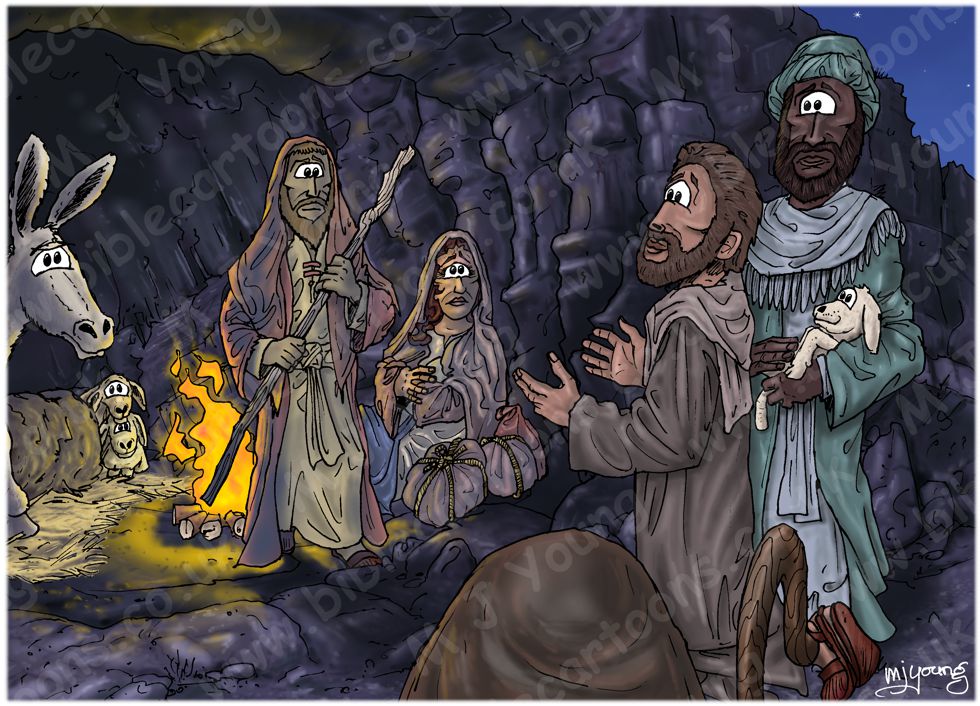 Luke 2:16 (NLT)
They [the Shepherds] hurried to the village [Bethlehem] and found Mary and Joseph. And there was the baby [Jesus], lying in the manger.

LIGHTING NOTES:
The main light source for this cartoon is from the night sky. Perhaps the moon is out, casting its pale, cold light onto the scene. You can see the pale blue highlights on the edges of rocks outside & inside the cave.
The other light source is the warm flickering camp fire, in the middle of the scene. Notice the yellow/orange highlights on the figures, animals & surrounding cave rocks.

CHARACTERS PRESENT:
In the cave: Joseph standing, Mary (the mother of Jesus) sitting, cradling the newly born Jesus.
Donkey, ewe & lambs on the left of the scene.

Outside the cave: three shepherds (unnamed in the Bible) approaching the cave. We see only the back of the head & shepherd’s crook/staff of one of them in the extreme foreground. The next is kneeling down in adoration & the third is carrying a lamb & stepping into the cave’s camp light.

RESEARCH/ADDITIONAL NOTES:
This scene shows Mary holding the newly born Jesus, although it is very difficult to make him out; all you can see is the side of his head & the cloth surrounding him, in Mary’s arms.

I wanted to bring a different emphasis to this scene than the usual beatific looks on everyone’s faces which most artists illustrate! The shepherds have just this second arrived; Joseph & Mary don’t know who ther are, what they want, & might naturally be apprehensive about the men’s sudden appearance. Joseph & Mary might be fearing that thieves or bandits have descended upon therm. Bearing that idea in mind, I have drawn Joseph in a defensive posture, with staff in hand, striding towards the unknown visitors with a look of determination on his face. Mary is looking worried & maybe a little fearful, as these three unknown men suddenly arrive on the scene. Even their donkey looks a little angry towards the men!
Bear in mind that Joseph & Mary may have recently walked up the road from Jericho to Jerusalem, before coming to Bethlehem, & that road had a reputation in first century Palestine as being a haunt for bandits & robbers. At this time Joseph & Mary would not have known about the wonderful heavenly visitation & celebrations which the shepherds had been part of.

The cave Joseph, Mary, Jesus & the animals are in is the same as in the previous scene:
Luke 02 – Nativity SET02 – Scene 02 – Stable (Inside cave version), although we are viewing the cave from the outside in this current view. The colours & textures come from that previous scene.

Note: in the previous cave scene (Luke 02 – Nativity SET02 – Scene 02 – Stable (Inside cave version)) I drew 2 Trident Bats & a Rock Hyrax, which are wild animals. In this scene they are either hiding, or have disappeared, disturbed no doubt by the sudden arrival of more people!