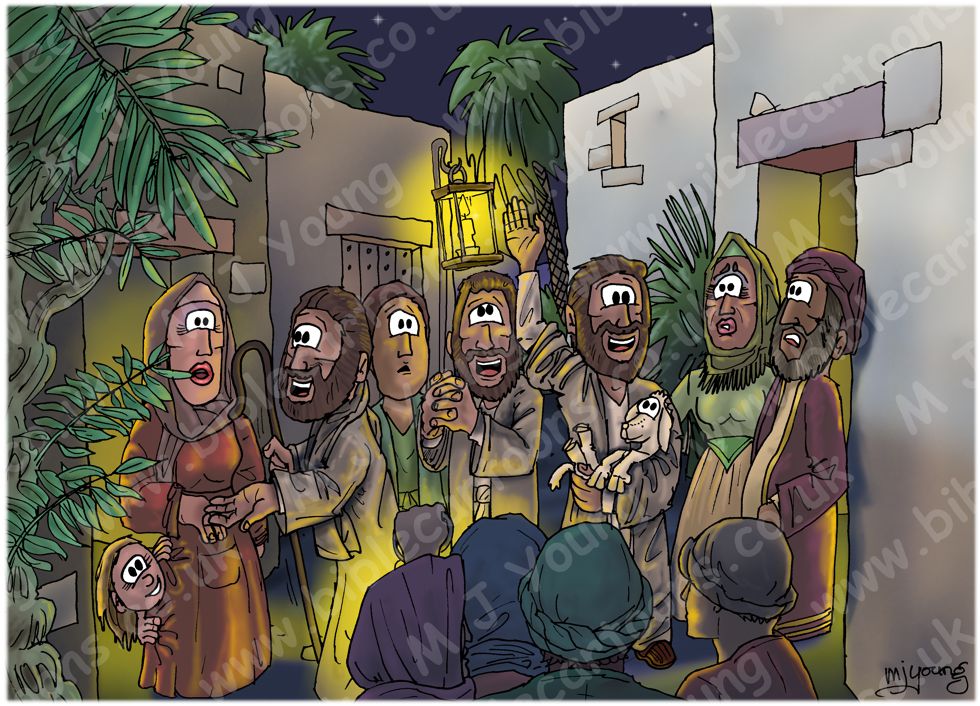 Luke 2:17-18 (NLT)
17 After seeing him [the baby Jesus], the shepherds told everyone what had happened and what the angel had said to them about this child. 18 All who heard the shepherds’ story were astonished, …

LIGHTING NOTES:
The lighting for this scene is a little more complex than usual.
There is cool blue moon or star light which can be seen reflected off the walls of the buildings on the right; also on the edges of the plants & hills in the background.

Contrasting that cool blue/white colour is the warm yellow/orange of the artificial light, which comes from four sources:
01) There is a unseen fire in the left hand house, which is throwing yellow light onto the edges of the woman in red & her child, who are standing in their doorway, on the left of the scene.
02) There is a similar house fire glow coming from the dwelling on the right, which you can see throwing a yellow/orange glow onto the edges of the man & woman standing in the doorway.
03) There is a candle in a lantern being held aloft by a man in green, in the middle of the scene. That throws a yellow light onto the tops of figures.
04) There is a figure in the foreground who is holding up a lantern, which throws a yellow light onto the front of figures. That creates deep shadows on all of the foreground figures, except the right hand man, who is side-lit by this light.

RESEARCH/ADDITIONAL NOTES:
This scene is set in the village of Bethlehem, in central Israel, about 6 miles (10 km) south of Jerusalem.

I had fun drawing the various people’s expressions in this scene!

The three shepherds are the men with light grey/brown outer robes, in the centre of the scene, excitedly talking to people. The shepherd on the left is engaging a woman in red in conversation, the central shepherd has his hand together in a praying gesture, whilst the right hand one is lifting his hand to explain about the angelic visitors they just saw. The right hand shepherd is carrying a lamb (Ovis aries), as he did in the previous scene, Luke 02 – Nativity SET01 – Scene 07 – Shepherds find Jesus. That cartoon was drawn in December 2009 (nearly 5 years ago!) so matching it in terms of my style has been a challenge!

There is an olive tree (Olea europaea) growing up the house wall, on the extreme left hand side of this scene. 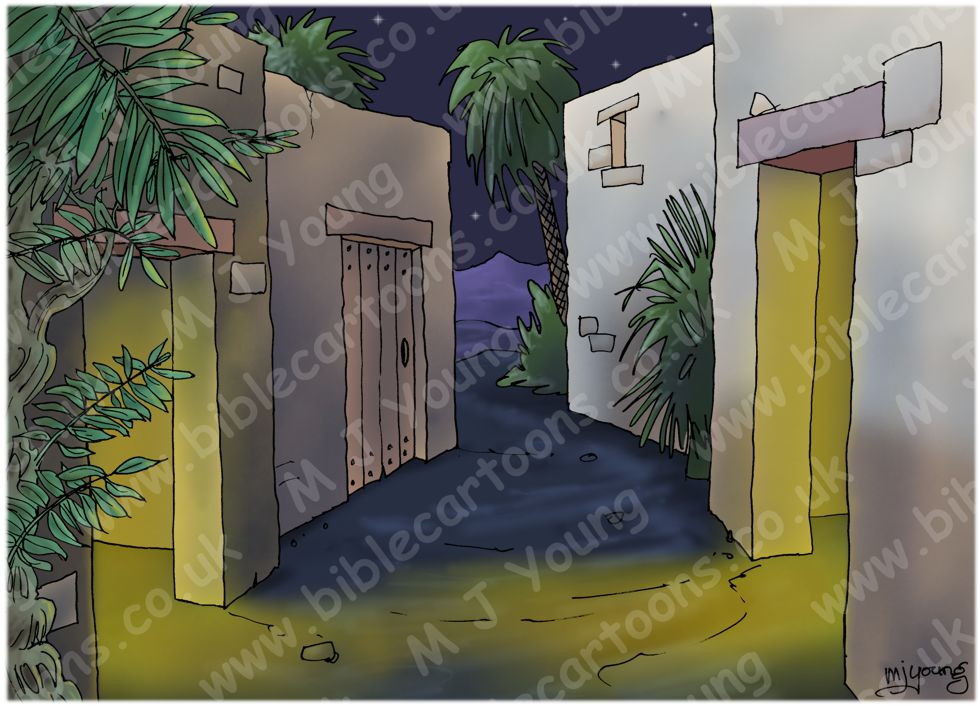 Luke 02 – Nativity SET01 – Scene 08 – Crowds astonished.
Scene without the figures, so you can see the townscape underlying the scene.