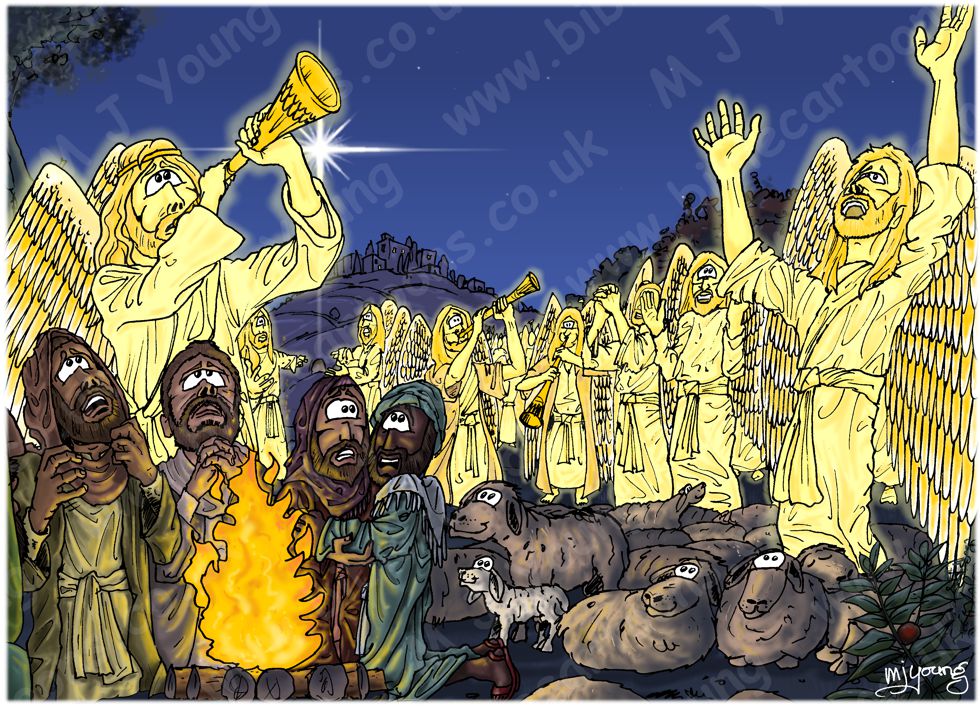 Luke 2:13-14 (ANIV)
13 Suddenly a great company of the heavenly host appeared with the angel, praising God and saying, 14 “Glory to God in the highest, and on earth peace to men on whom his favour rests.”

LIGHTING NOTES:
The stars (particularly the bright one over the cave near Bethlehem) provides the cool blue light of this scene. In contrast to that is the warm yellow/red glow of the shepherd’s camp fire. You can see highlights of that warm glow on the figures, sheep, trees & surrounding ground. The angels provides a feint pale yellow glow as well.

RESEARCH/ADDITIONAL NOTES:
This scene uses the same background (mountains, hills, trees, etc) as the next scene (Luke 02 – Nativity SET 02 – Scene 06 – Let’s go!) which I actually completed before this one.

The expressions of terror, or wonder on the shepherd’s faces also contrasts with the angelic being’s expressions of adoration & worship. Notice the sheeps expessions, which are happy & contented. As I noted in a previous scene, I expect that animals are not scarred of angelic beings, as we might be!

In the previous scene () I depicted two shepherds huddling & grasping hands together on the left in terror. In the scene above I have drawn them on the right of the camp fire, still huddled together for mutual support!

Notice there are two angels pointing towards the glowing cave mouth, in which Jesus has just been born.

As I noted for scene 03: I looked for photographs of a suitable view of Bethlehem on the internet for this scene. The photo I found shows the modern city, which is indeed built on a hill. My version of Bethlehem is as a large village or small town, since I believe there were far fewer people living in the place in first century Palestine/Israel than there are now.