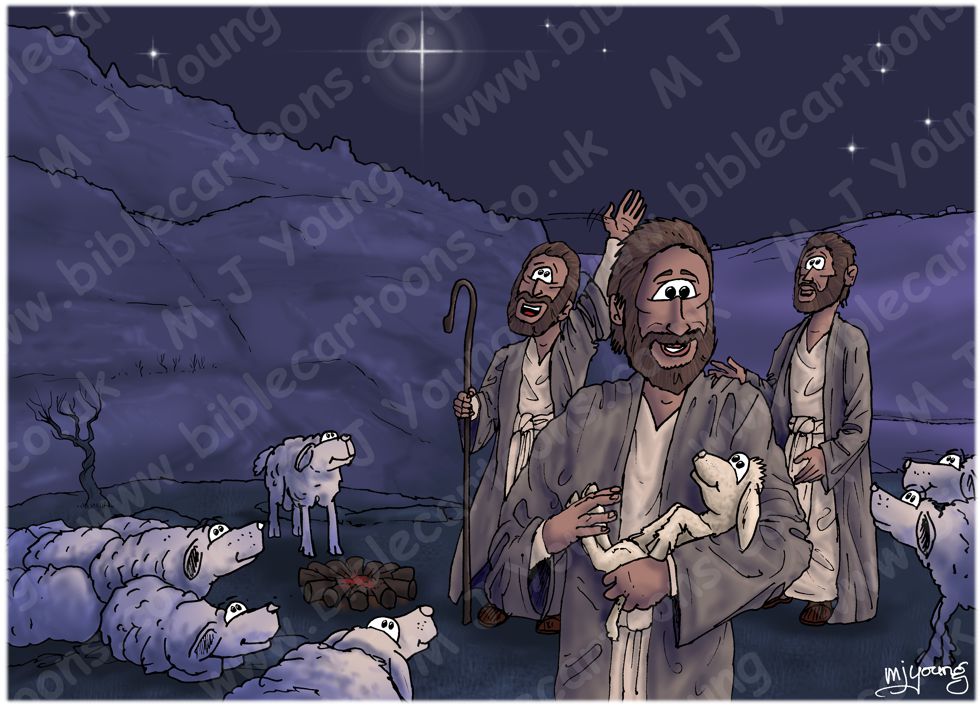 Luke 2:20 (NLT)
The shepherds went back to their flocks, glorifying and praising God for all they had heard and seen. It was just as the angel had told them.

LIGHTING NOTES:
Lighting for this scene comes from the stars, especially the large one in the top left hand corner.

CHARACTERS PRESENT:
Three shepherds, returning to their flocks on the hills near Bethlehem.

RESEARCH/ADDITIONAL NOTES:
This is the last picture I needed to finish, to complete the 10 scene collection of The Nativity SET01.

This scene is similar to previous ones in this set (e.g. Luke 02 – Nativity SET01 – Scene 03 – Shepherds) in that it deliberately contains similar colours in the background, mid ground & fore ground elements, in order to maintain continuity between the scenes in this set. I have changed the background to include a large rocky valley. The small village of Bethlehem is out of sight, below the large star.

In the original picture (completed 03/November 2014) I only had three shepherds, returning from seeing Jesus in Bethlehem, & praising God. You’ll notice that in several of the previous scenes I have opted for three shepherds. However, I felt that this final scene lacked something, so I added the fourth shepherd (on the left) as a revision on 02/December/2014, which balances the scene better. The fourth shepherd didn’t see the angels or go to see Messiah, which is why he is shrugging his shoulders with raised hands & that questioning expression on his face, as if to say to the other three “Huh? Where have you been & why all this praising of God?!”