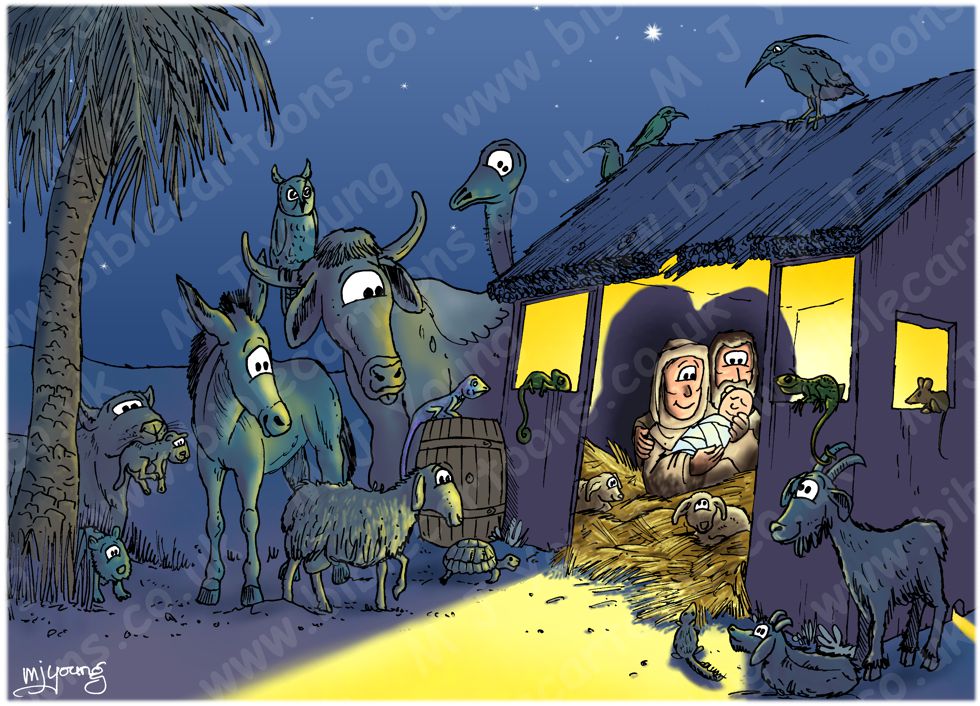 LIGHTING NOTES:
The main light source for this cartoon is the glow coming from the infant Jesus. The stars are also casting a feint, cool blue glow on the scene.

CHARACTERS PRESENT:
Jesus, Joseph, Mary (the mother of Jesus) in a stable. Various animals, see below.

I’ve been researching which animals did, or do, live in Israel & the Holy lands so that I can be confident to include them in my cartoons.

The cast of animals, from left to right:
a Rock Hyrax (Procavia capensis) or Cape Hyrax, is emerging from the grasses at the base of a date palm. Behind it, can be seen a female lion (Panthera leo) with her cub in her mouth.
a Donkey or ass (Equus africanus asinus) stands looking into the stable, with an unspecified cow next to it.
A Sheep stands looking into the stable, with two lambs amongst the straw inside.
The lizard on the wooden barrel is a Sinai Agama (Pseudotrapelus sinaitus) which often has an amazing blue colouration. A similar lizard can be seen in my depiction of The Good Samaritan story (see Luke 10.)
The tortoise is called a Spur-thighed Tortoise (Testudo graeca) & is plodding slowly to see the new-born infant!
A Common Chamaeleon (Chamaeleo chamaeleon recticrista) is looking in on the scene from the left-hand window, whilst a Levant Green Lizard (Lacerta media israelica) is perched on the right hand window, with a Yellow-necked field mouse (Apodemus flavicollis) sitting on the window furthest to the right of the picture.
A Bushy-tailed jird (Sekeetamys calurus) can be seen on the ground, to the right of the stable entrance, next to a goat & her kid.

The cast of birds:
The cow has a Long-eared Owl (Asio otus) perched on it’s horn.
Next to that is an Ostrich. These large flightless birds used to be found in Israel, but have since become extinct. The Ostrich could have been the Middle Eastern Ostrich or Arabian Ostrich (Struthio camelus syriacus) or else the North African subspecies which used to live in the Nile Valley of Egypt.
Two examples of the Little Green Bee-eater (Merops orientalis) can be seen perched on the roof, next to a larger Black-crowned Night Heron (Nycticorax nycticorax) noted for it’s two long white feather plumes on the nape of the neck.