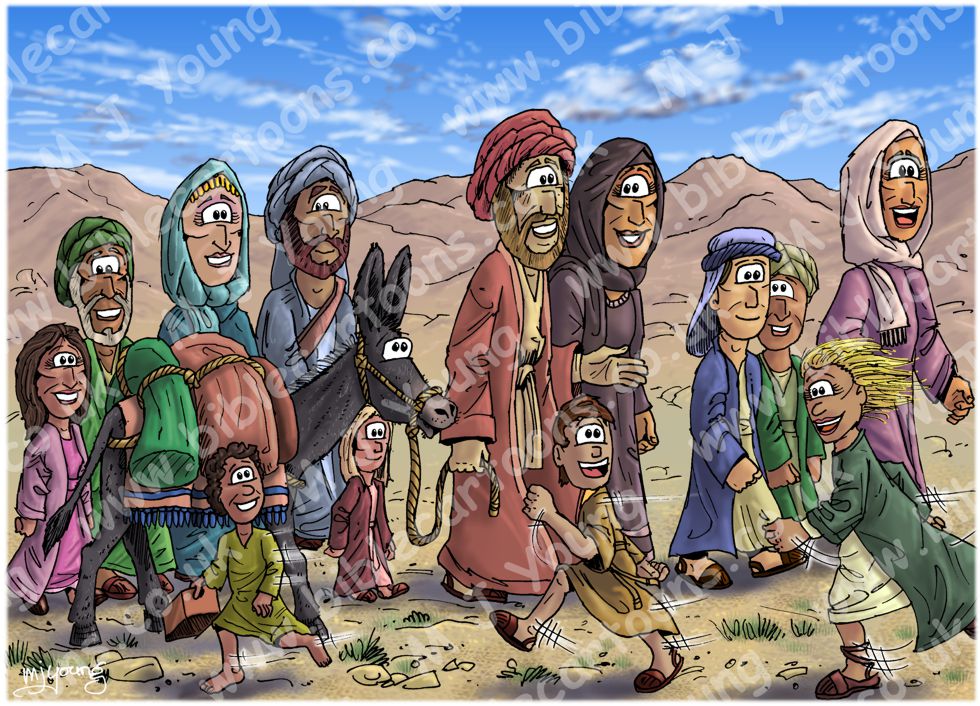 Luke 2:41-42 (NLT)
41 Every year Jesus’ parents went to Jerusalem for the Passover festival. 42 When Jesus was twelve years old, they attended the festival as usual.

LIGHTING NOTES:
The pale sun is illuminating this scene, coming form the right & casting some faint shadows towards the left.

CHARACTERS PRESENT:
Jesus (as young boy, dressed in blue, 4th from the right), Joseph (Jesus step-father, holding the donkey’s rope), Mary (the mother of Jesus) in dark clothes walking by Joseph.
The other people are various relatives & friends of Mary & Joseph, all going to celebrate Passover in Jerusalem.

Matthew 12:46-47 (NLT)
As Jesus was speaking to the crowd, his mother and brothers stood outside, asking to speak to him. Someone told Jesus, “Your mother and your brothers are outside, and they want to speak to you.”

Matthew 13:55-56 (NLT)
Then they scoffed [the people of Nazareth, Jesus’ hometown], “He’s just the carpenter’s [Joseph’s] son, and we know Mary, his mother, and his brothers—James, Joseph, Simon, and Judas. All his sisters live right here among us…”

The Bible seems to support the idea that Jesus had 4 brothers and probably at least 3 sisters (if there had been only 2, the word ‘both’ would have been used instead of ‘all’.)

Some commentators claim that Mary remained a virgin all her life & therefore did not have any more children. There are various claims that another Mary had children & these are being referred to in the passages of the Bible above. However, the Greek word ‘adelphos’ is used to describe Jesus’ brothers & that term doesn’t apply to cousins, but to a blood brother relationship only. So it seems to me that Mary did indeed have other children after her first child (Jesus the Christ) was born.