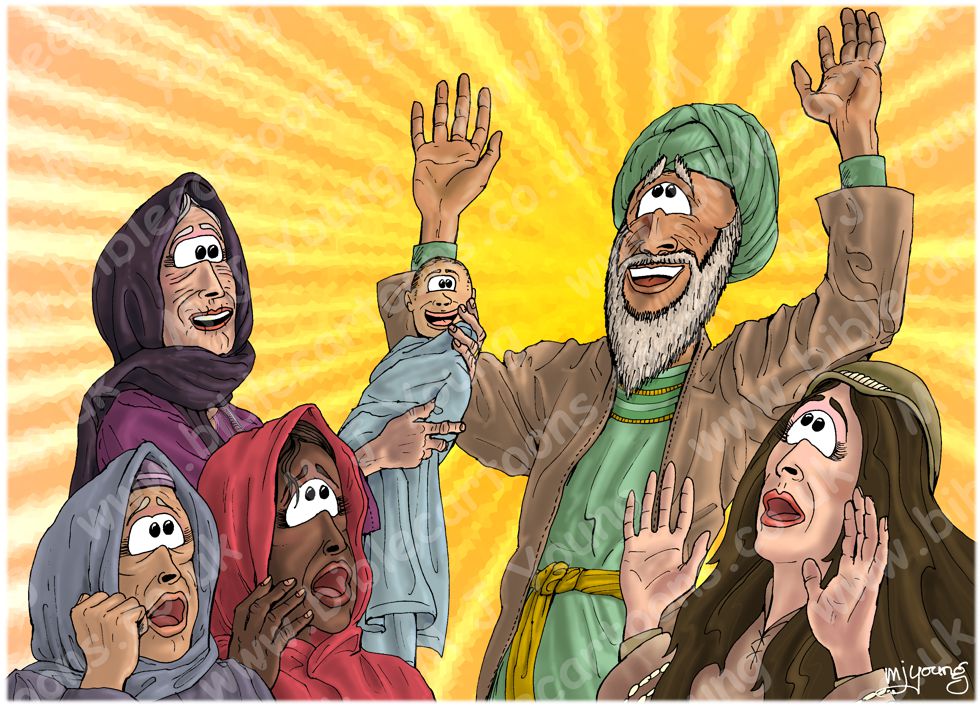 Luke 1:59-79 (NLT)
59 When the baby was eight days old, they all came for the circumcision ceremony. They wanted to name him Zechariah, after his father.
60 But Elizabeth said, “No! His name is John!”
61 “What?” they exclaimed. “There is no one in all your family by that name.” 62 So they used gestures to ask the baby’s father what he wanted to name him. 63 He motioned for a writing tablet, and to everyone’s surprise he wrote, “His name is John.”

64 Instantly Zechariah could speak again, and he began praising God. 65 Awe fell upon the whole neighborhood, and the news of what had happened spread throughout the Judean hills. 66 Everyone who heard about it reflected on these events and asked, “What will this child turn out to be?” For the hand of the Lord was surely upon him in a special way.

67 Then his father, Zechariah, was filled with the Holy Spirit and gave this prophecy:

68 “Praise the Lord, the God of Israel,
because he has visited and redeemed his people.
69 He has sent us a mighty Savior [1]
from the royal line of his servant David,
70 just as he promised through his holy prophets long ago.
71 Now we will be saved from our enemies
and from all who hate us.
72 He has been merciful to our ancestors
by remembering his sacred covenant—
73 the covenant he swore with an oath
to our ancestor Abraham.
74 We have been rescued from our enemies
so we can serve God without fear,
75 in holiness and righteousness
for as long as we live.

76 “And you, my little son,
will be called the prophet of the Most High,
because you will prepare the way for the Lord.
77 You will tell his people how to find salvation
through forgiveness of their sins.
78 Because of God’s tender mercy,
the morning light from heaven is about to break upon us, [2]
79 to give light to those who sit in darkness and in the shadow of death,
and to guide us to the path of peace.”

[1]
Greek, has raised up a horn of salvation for us.

[2]
Or, the Morning Light from Heaven is about to visit us.

RESEARCH/ADDITIONAL NOTES:
I wanted to make the foreground ladies have expressions of shock & surprise, as Zechariah was suddenly able to speak once more.

This is the second version of this scene (of two versions) which has a background composed of radiating coloured lines.