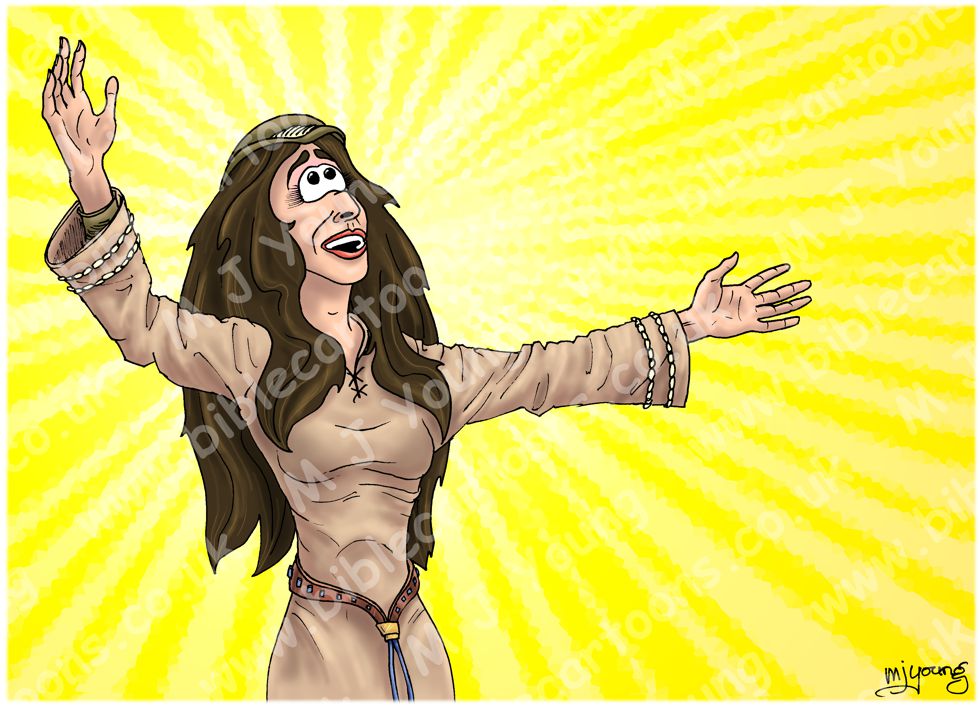 Luke 1:46-56 (NLT)
46 Mary responded,
“Oh, how my soul praises the Lord.
47 How my spirit rejoices in God my Saviour!
48 For he took notice of his lowly servant girl,
and from now on all generations will call me blessed.
49 For the Mighty One is holy,
and he has done great things for me.
50 He shows mercy from generation to generation
to all who fear him.

51 His mighty arm has done tremendous things!
He has scattered the proud and haughty ones.
52 He has brought down princes from their thrones
and exalted the humble.
53 He has filled the hungry with good things
and sent the rich away with empty hands.

54 He has helped his servant Israel
and remembered to be merciful.
55 For he made this promise to our ancestors,
to Abraham and his children forever.”

56 Mary stayed with Elizabeth about three months and then went back to her own home.

TIME OF DAY:
As specified in the previous scene, Mary is likely to have arrived during the daytime, I have set the scene in mid to late morning.

LIGHTING NOTES:
This scene has no real source of light, being indicative of Mary’s special moment with the Lord, as she sings her praise song to God. The figure of Mary is illuminated from the right, with shadows on the left.

RESEARCH/ADDITIONAL NOTES:
For this scene I wanted the minimal background, so that the viewer’s attention is focussed entirely on the figure of Mary. The colour of her skin, hair & her clothing colour & design have already been determined in previous scenes.

Mary’s Song of Praise is also called “The Magnificat” which is apparently the first word in the Latin translation of this passage.

Interestingly, in the middle section, Mary’s song of praise emphasized the casting down of the proud and wealthy (verse 51-52) & conversely, the exaltation of the poor and humble (verse 53). In this construction Mary’s song strongly resembles the praise song of Samuel’s mother, Hannah (see 1 Samuel 2:1-10.) Like Hannah, the mother of Samuel, Mary sang glory to God for what he was going to do for the world through her. Notice that in both songs, God is portrayed as a champion of the poor, despised & oppressed.

As Matthew Henry in his Bible commentary notes:
“Those who see their need of Christ, and are desirous of righteousness and life in him, he fills with good things, with the best things; and they are abundantly satisfied with the blessings he gives. He will satisfy the desires of the poor in spirit who long for spiritual blessings, while the self-sufficient shall be sent empty away.”

Since Elizabeth was an old woman, we could expect her to have experienced some discomfort due to her pregnancy with John. Mary was probably very helpful to Elizabeth during the three months she remained with Elizabeth. I expect Mary discussed with Elizabeth her own tricky social situation: that of unmarried pregnancy, which, at the time, would have been severely frowned upon by society. No doubt Elizabeth would have advised Mary how to tactfully explain her pregnancy to her family and her fiancé, Joseph. I expect Mary’s return home, three months pregnant, would have been done in the mutual strengthening of her own & Elizabeth’s faith in God.

We know from Luke 1:26 that Mary travelled to Zecheriah & Elizabeth’s home in the latter’s 6th month of pregnancy. And from Luke 1:56 we know that Mary remained about three month’s at their home, or until John was due to be born. Although some Bible commentators seem to think that Mary’s departure from Elizabeth’s home may have been a few days before the birth of John, I think she is more likely to have remained with Elizabeth until after his birth, only then returning to her family home in Nazareth.