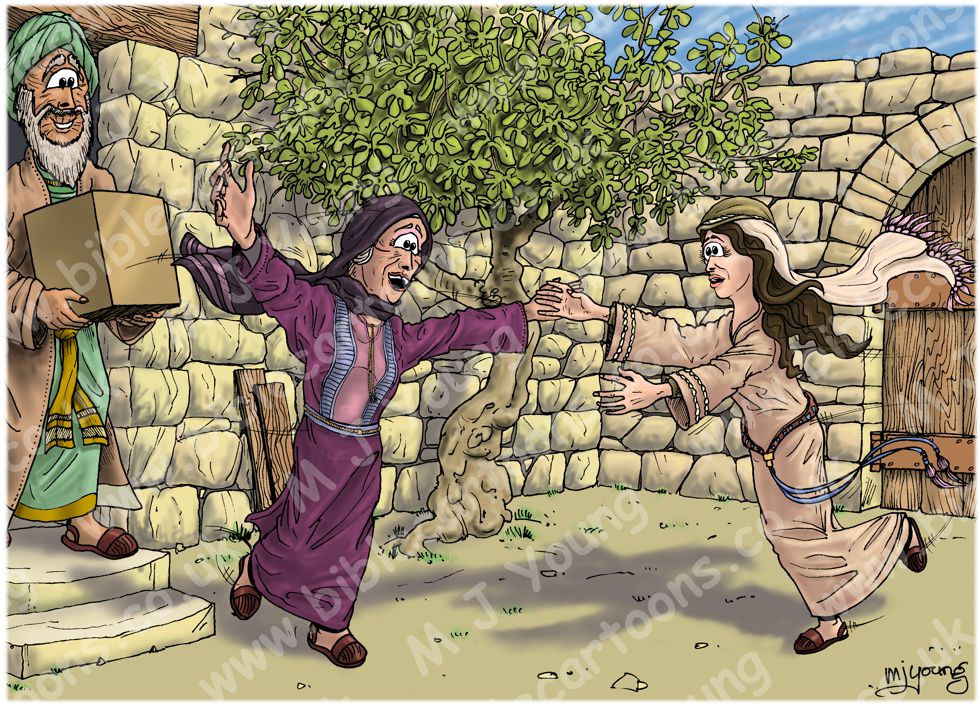 Luke 1:40-45 (NLT)
[39 A few days later Mary hurried to the hill country of Judea, to the town 40 where Zechariah lived.] She [Mary] entered the house and greeted Elizabeth. 41 At the sound of Mary’s greeting, Elizabeth’s child leaped within her, and Elizabeth was filled with the Holy Spirit.
42 Elizabeth gave a glad cry and exclaimed to Mary, “God has blessed you above all women, and your child is blessed. 43 Why am I so honoured, that the mother of my Lord should visit me?44 When I heard your greeting, the baby in my womb jumped for joy. 45 You are blessed because you believed that the Lord would do what he said.”

TIME OF DAY:
Mary is likely to have arrived during the daytime, I have set the scene in mid to late morning.

LIGHTING NOTES:
The sun (above & to the right) illuminates this scene.

CHARACTERS PRESENT:
From left to right the characters are: Zechariah, Elizabeth (John the Baptist (in Elizabeth’s womb)) & Mary (the mother of Jesus.)

RESEARCH/ADDITIONAL NOTES:
This scene shows an emotion-charged greeting between Mary (the young figure running in from the right) & Elizabeth, the older woman running to greet her, from the left. Zechariah (who still can not speak after his encounter with the Angel Gabriel in the Temple of the Lord in Jerusalem) is walking out of their home with a box in his arms.
Notice how glad Zechariah & particularly Elizabeth are to see Mary, & how emotional Mary looks as she flings herself at her relative.

The scene takes place in the walled courtyard at the back of Zechariah & Elizabeth’s home. Notice the fig tree in the corner (Scientific name: Ficus carica.)

“Elizabeth’s loudly spoken words, Blessed (eulogēmenē, lit., “well spoken of”) are you among women, carry the idea that Mary is the most honored of all women. Elizabeth called her the mother of my Lord. In Luke the term “Lord” (kyrios) often describes Jesus. It has a double meaning. “Lord” would be more important for a Greek reader than would the term “Christ” (meaning “Messiah”), for the Gentiles had not been anxiously awaiting the Messiah. On the other hand the Septuagint often used the word “Lord” (kyrios) to translate Yahweh. Again (v. 45) Elizabeth said Mary was blessed (makaria, “happy”) because she believed what God had told her. This suggests that Mary visited Elizabeth not with a skeptical attitude but rather joyously, to confirm what had been announced to her.”
(Source: The Bible Knowledge Commentary: An Exposition of the Scriptures by Dallas Seminary Faculty.) 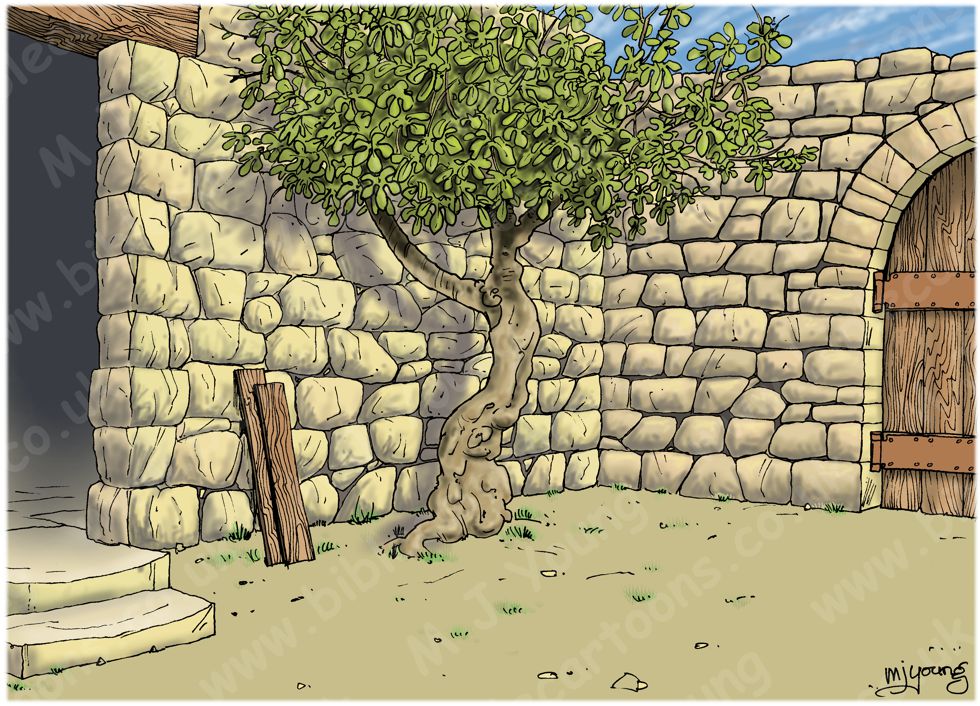