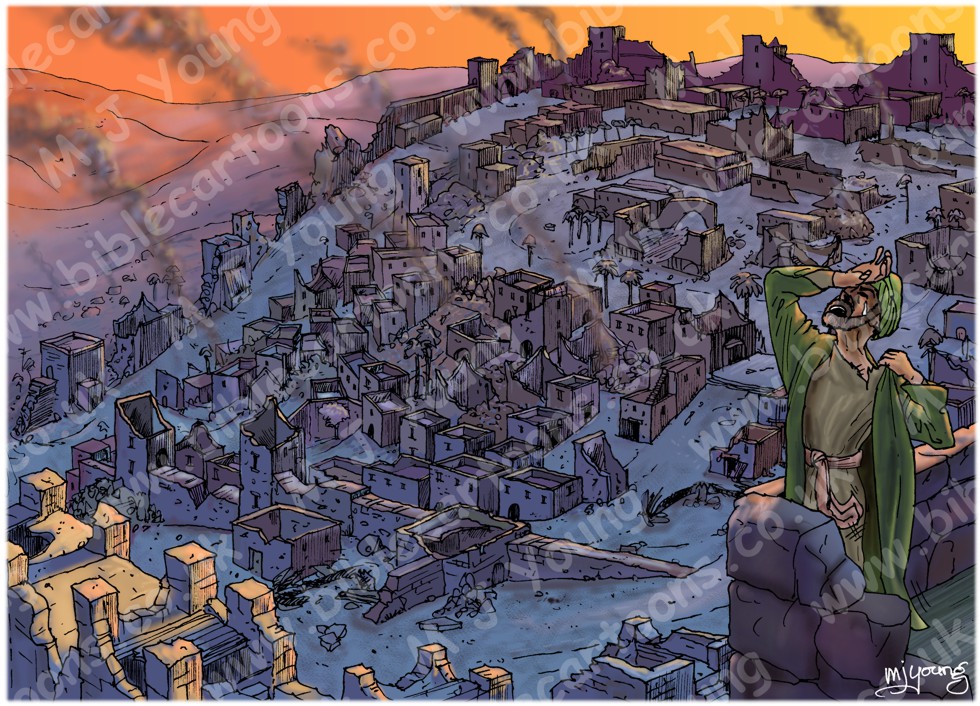 Lamentations 1:1 (ANIV)
1 [1] How deserted lies the city,
once so full of people!
How like a widow is she,
who once was great among the nations!
She who was queen among the provinces
has now become a slave.

[1]
This chapter is an acrostic poem, the verses of which begin with the successive letters of the Hebrew alphabet.

TIME OF DAY:
Unspecified in Bible. I have set the scene at sunset.

LIGHTING NOTES:
The setting sun (out of view, off to the right) provides the light in this scene.
Notice the orange sunlight from the setting sun on the edges of the figure & battlements of the walls in the left foreground.

RESEARCH/ADDITIONAL NOTES:
There are two versions of this scene:
01) (Previous page) Lamentations – Sorrow in Jerusalem – Scene 01 – Desolate city (Dark version). In which the city scene is darker in tone.

02) (This page) Lamentations – Sorrow in Jerusalem – Scene 01 – Desolate city (Lighter version). In this version the city and background are lighter in tone.

“The city” (verse 1) refers to Jerusalem.

In my picture you can see the prophet Jeremiah (called the weeping prophet) in the bottom right hand side of the scene, weeping & tearing his clothes in anguish as he looks out from some high vantage point over the broken walls & homes of Jerusalem.

I have drawn an aerial view of part of the city, looking from the North East towards the South West. Directly below the viewer is the Kidron valley, & you can see the Hinnom Valley behind the city walls, on the South side of the city (the left hand side of the scene). From the viewers position the city descends away (to the left) downhill towards the city walls on the south side of Jerusalem – this is the City of David section of Jerusalem. You may also notice that the city comprises small houses in the lower centre of the picture (the Old City) with much larger houses at the top of the hill (the Upper City) where wealthy people no doubt lived. To the left of Jeremiah’s raised elbow is a shattered theatre, also in the Upper City.

If you look closely you will see that I have drawn many broken walls, towers, trees & houses in the city. There is also smoke from fires set by the Babylonian army, who breached the walls & invaded the city.

“Lamentations begins with the Hebrew word Eicha (how?), and the book is known in Hebrew as Megillat Eicha (the scroll of Eicha.) The book is a theological and prophetic response to the destruction of the First Temple (Beit Hamikdash), in Jerusalem, in 586 B.C.E. The Talmud (The Babylonian Talmud, Tractate Bava Batra 15a) states that it was written by the prophet Jeremiah, who lived at the time of the destruction. Chapters 1, 2, and 4 of Lamentations are an alphabetical acrostic, with each line starting with another letter of the Hebrew alphabet. Chapter 3 is a three-fold acrostic, with three lines for each letter of the alphabet.

In Hebrew, ekah, can be translated “Alas!” or “How,” giving the sense of weeping or lamenting over some sad event. Later readers and translators substituted in the title “Lamentations” because of its clearer and more evocative meaning. It’s this idea of lamenting that, for many, links Jeremiah to the book. Not only does the author of the book witness the results of the recent destruction of Jerusalem, he seems to have witnessed the invasion itself (Lamentations 1:13–15). Jeremiah was present for both events.”
[Source: http://www.myjewishlearning.com/article/lamentations/]

Many Bible commentaries attribute the prophet Jeremiah as the author of this book. He may even have been present in Jerusalem at the time of the Babylonian invasion of 586 BC.

“Why is Lamentations so important?
Like the book of Job, Lamentations pictures a man of God puzzling over the results of evil and suffering in the world. However, while Job dealt with unexplained evil, Jeremiah lamented a tragedy entirely of Jerusalem’s making. The people of this once great city experienced the judgment of the holy God, and the results were devastating. But at the heart of this book, at the center of this lament over the effects of sin in the world, sit a few verses devoted to hope in the Lord (Lamentations 3:22–25). This statement of faith standing strong in the midst of the surrounding darkness shines as a beacon to all those suffering under the consequences of their own sin and disobedience.”
[Source: http://www.insight.org/resources/bible/lamentations.html?referrer=https://www.google.com/]

View all Bible Cartoons in Lamentations Go to Search by Bible Book page Do I need High or Medium qlty cartoons? FAQ’s