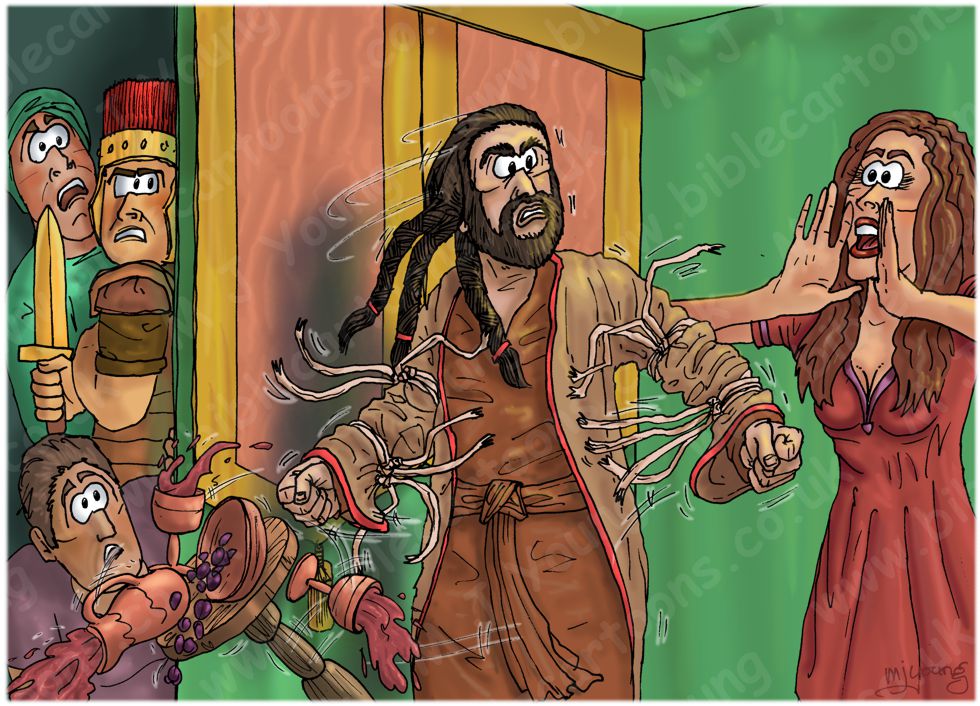 Judges 16:4-9 (ANIV)
4 Some time later, he [Samson] fell in love with a woman in the Valley of Sorek whose name was Delilah. 5 The rulers of the Philistines went to her and said, “See if you can lure him into showing you the secret of his great strength and how we can overpower him so that we may tie him up and subdue him. Each one of us will give you eleven hundred shekels [1] of silver.”
6 So Delilah said to Samson, “Tell me the secret of your great strength and how you can be tied up and subdued.”
7 Samson answered her, “If anyone ties me with seven fresh thongs [2] that have not been dried, I’ll become as weak as any other man.”
8 Then the rulers of the Philistines brought her seven fresh thongs that had not been dried, and she tied him with them. 9 With men hidden in the room, she called to him, “Samson, the Philistines are upon you!” But he snapped the thongs as easily as a piece of string snaps when it comes close to a flame. So the secret of his strength was not discovered.

CHARACTERS PRESENT:
Samson breaking the seven thongs on his arms.
Delilah shouting “Samson, the Philistines are upon you!”
Three (or more?!) Philistine men, hiding behind a curtain, to the left of the scene.

RESEARCH/ADDITIONAL NOTES:
This scene shows Samson easily breaking the seven new thongs which Delilah has tied him up with. I decided to keep this scene fairly simple, so the viewers attention is on the figures and their actions. I like the hidden Philistine men’s expressions of awe, anxiety, disappointment &/or possibly fear!

I enjoyed drawing the table, cups, wine jug & grape bowl clattering to the floor, as Samson uses his supernatural strength to break his bonds.