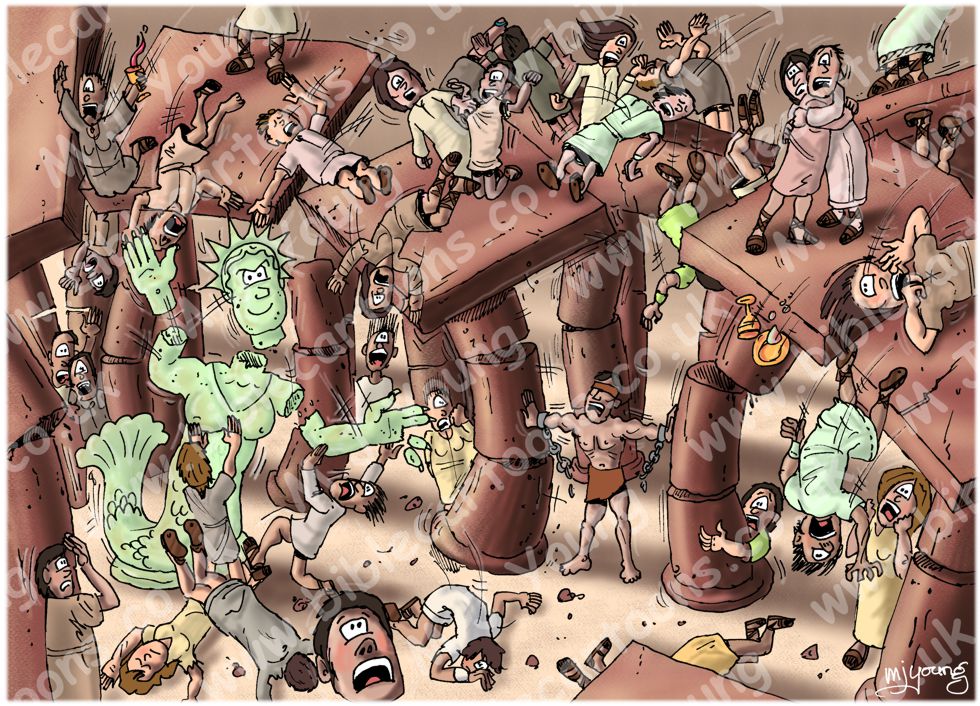 Judges 16:29-30 (ANIV)
29 Then Samson reached towards the two central pillars on which the temple stood. Bracing himself against them, his right hand on the one and his left hand on the other, 30 Samson said, “Let me die with the Philistines!” Then he pushed with all his might, and down came the temple on the rulers and all the people in it. Thus he killed many more when he died than while he lived.

RESEARCH/ADDITIONAL NOTES:
The temple was in the town/city of Gaza, on the Mediterranean coast of Israel.

I looked in various commentaries & on the internet for references to Dagon, the god of the Philistines. He is described as half woman (or man) & half fish. I have drawn a type of mermaid creature as the green breaking statue on the left-hand side of this cartoon to represent this description.

Other references suggests that the temple was on 2 levels, such that Samson was able to push over the 2 main support pillars & bring it down. That makes for a dramatic scene, so I decided to illustrate that.

Samson’s strength returned at the end of the story, hence he has broken his chains in this cartoon. The cloth about his eyes is my device to showing he had been blinded by the Philistines.


Bible Doctrine Notes
16:23-24 HISTORY, God (3.36A)
God’s actions in history may not be obvious or evident. People may claim control of history, either for themselves or behalf of their god(s). But the long run of history shows that only the one true God controls it.

16:28 PRAYER, Petition (5.54D)
After breaking his vows and losing his strength, Samson returned to the Lord. God heard his self-sacrificing prayer and restored his supernatural strength one last time. Samson proves that a person does not have to be perfect to pray to God, and that God listens to the prayers of repentant people.