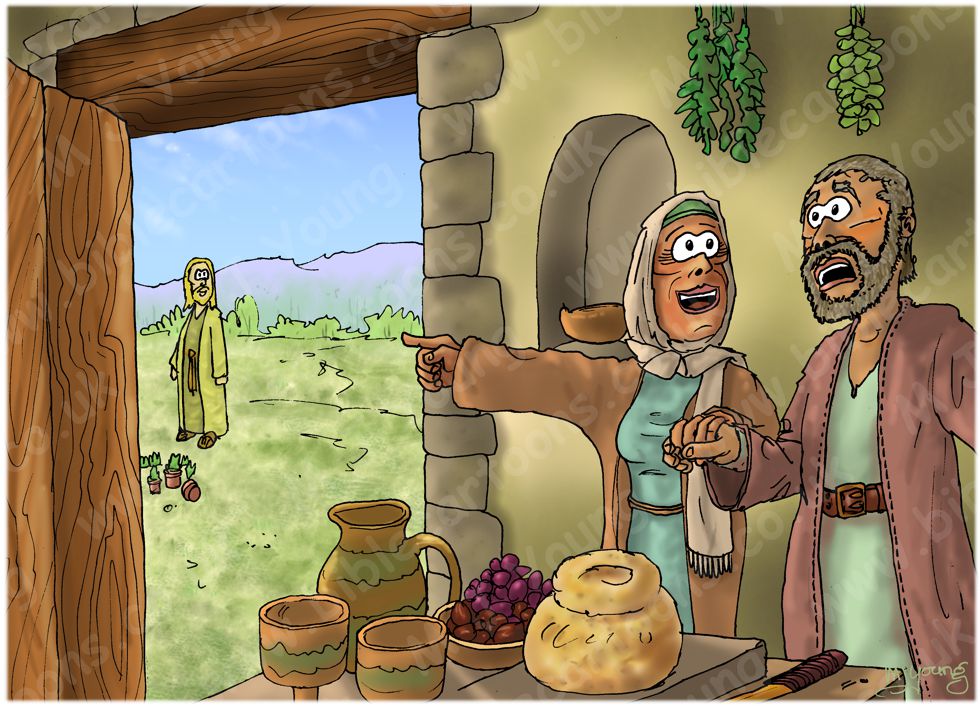 Judges 13:6-10 (ANIV)
6 Then the woman went to her husband and told him, “A man of God came to me. He looked like an angel of God, very awesome. I didn’t ask him where he came from, and he didn’t tell me his name. 7 But he said to me, ‘You will conceive and give birth to a son. Now then, drink no wine or other fermented drink and do not eat anything unclean, because the boy will be a Nazirite of God from birth until the day of his death.’ “
8 Then Manoah prayed to the Lord: “O Lord, I beg you, let the man of God you sent to us come again to teach us how to bring up the boy who is to be born.”
9 God heard Manoah, and the angel of God came again to the woman while she was out in the field; but her husband Manoah was not with her. 10 The woman hurried to tell her husband, “He’s here! The man who appeared to me the other day!”

TIME OF DAY:
The Bible doesn’t specify the time of day. I’ve set this scene in the early afternoon.

LIGHTING NOTES:
The sun is high in the sky (unseen, on the left), casting shadows to the right of people and objects.

CHARACTERS PRESENT:
In the foreground, inside their house, are Manoah and his un-named wife. Outside we can see a male figure, who is, in fact, an angel of the Lord.

RESEARCH/ADDITIONAL NOTES:
This scene shows Manoah’s wife inside their home, pointing out the front door at the angel of the Lord. Unlike his wife, Manoah doesn’t seem to have seen that it was an angel (see verse 16), which is why I haven’t drawn the wings on the angel, and he has slightly different (more human) clothing.

I decided to draw Manoah with an expression of surprise on his face in this scene. Apparently the Hebrew name Manoah means “rest” or “quiet”.

I enjoyed drawing the dried herbs hanging from the ceiling, and the cups, jug, bread, chopping board and fruit bowl in this scene. Notice that the knife is made of bronze, since the iron age hadn’t started in human history yet!