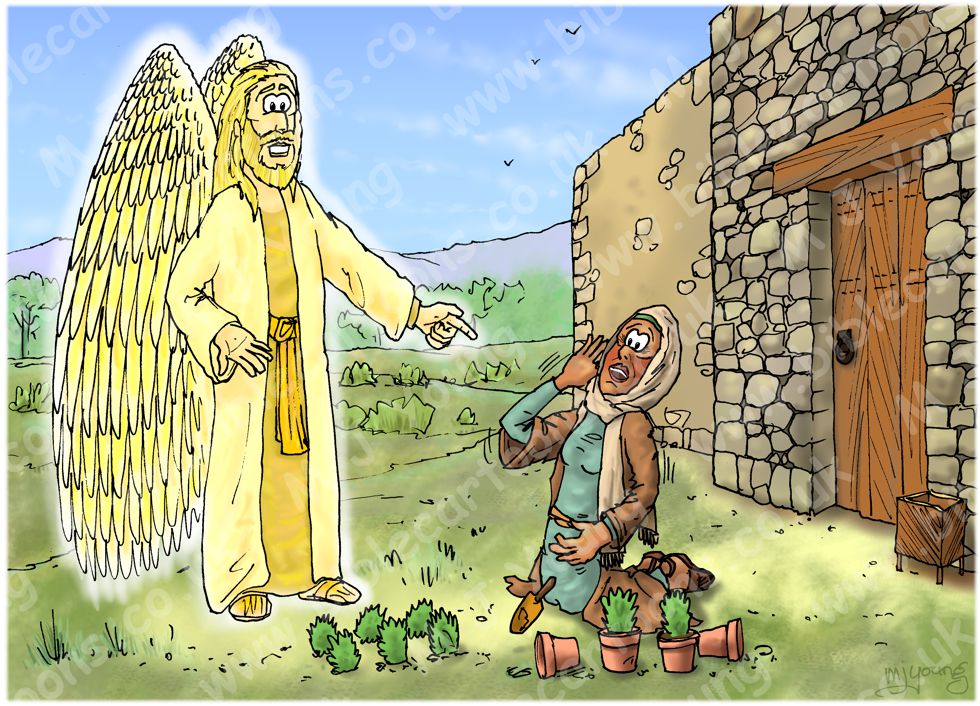 Judges 13:1-5 (ANIV)
The birth of Samson
1 Again the Israelites did evil in the eyes of the Lord, so the Lord delivered them into the hands of the Philistines for forty years.
2 A certain man of Zorah, named Manoah, from the clan of the Danites, had a wife who was sterile and remained childless. 3 The angel of the Lord appeared to her and said, “You are sterile and childless, but you are going to conceive and have a son. 4 Now see to it that you drink no wine or other fermented drink and that you do not eat anything unclean, 5 because you will conceive and give birth to a son. No razor may be used on his head, because the boy is to be a Nazirite, set apart to God from birth, and he will begin the deliverance of Israel from the hands of the Philistines.”

TIME OF DAY:
The Bible doesn’t specify the time of day. I’ve set this scene in the early afternoon.

LIGHTING NOTES:
The sun is high in the sky (unseen, on the left), casting shadows to the right of people and objects.

CHARACTERS PRESENT:
The un-named wife of Manoah. An angel

RESEARCH/ADDITIONAL NOTES:
Zorah (aka Zoreah, Zareah) was the birth place of Samson. A town west of Jerusalem, its inhabitants were known as Zorathites or Zareathites.

This scene shows Manoah’s wife planting in a little field just outside their home (which we can see to the right). An angel of the Lord is standing before Manoah’s wife, who looks shocked… which is understandable!

The angel gave instructions regarding the child Manoah’s wife was soon to conceive. No doubt this would have been good news for her, since in the Hebrew mind, childlessness was a stain on the character of those men and women it affected.

In this scene I have shown the angel complete with my usual feather-like wings. In the next scene, when Manoah looks, he doesn’t see that it is an angel, so I have drawn the figure as a wingless being instead, to represent this.