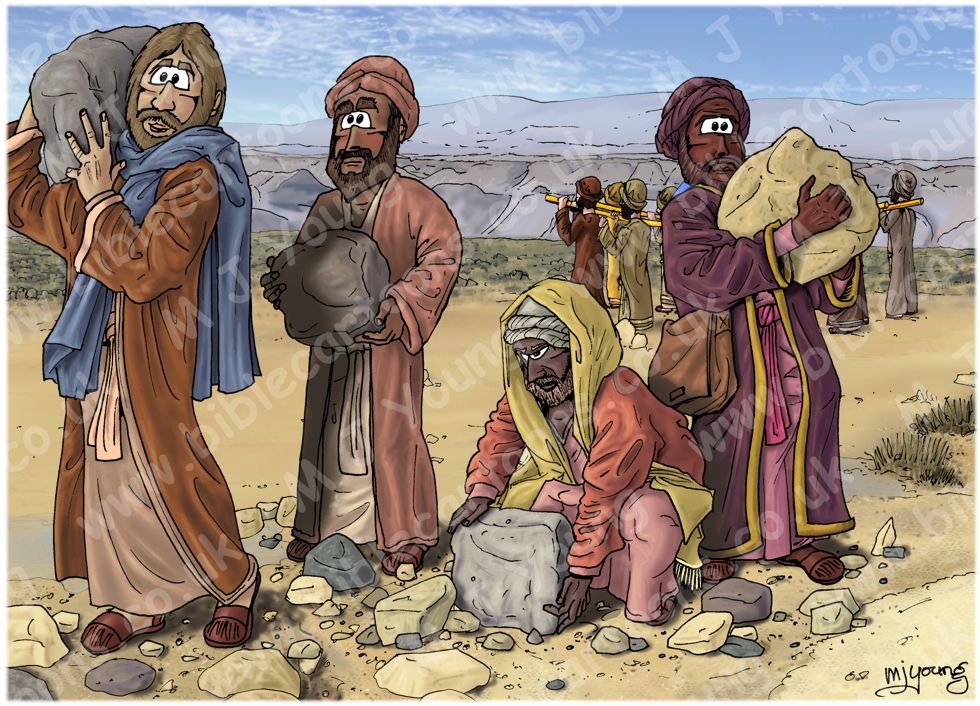 TIME OF DAY:
Early afternoon (as in the previous scene).

LIGHTING NOTES:
The sun is on the left, casting shadows to the right of objects & figures.

CHARACTERS PRESENT:
Four of the twelve men chosen to carry stones.
In the middle ground: eight Levites who are carrying the Ark of the Covenant.

RESEARCH/ADDITIONAL NOTES:
This scene uses the same background as the previous one (Joshua 03 – Jordan crossing – Scene 05 – River crossing). Note that I have changed the clouds a little; I moved them along to the right, & added some more to the left, indicating the passage of time. A few minutes have elapsed since the last scene.

Notice also that the eight Levites who are carrying the Ark of the Covenant are still standing in the middle of the dry riverbed, although you can not see any of the other Hebrew people who have already passed by to the other side of the river.

The men picking up stones are four of the ones illustrated in Scene 02 – 12 men. Sine they were tasked with setting up stones as a memorial I expect they decided to pick large boulders! I took various photographs of myself picking up a weight, to help me to design the clothing folds & to get the light & shade right.


Bible Doctrine Notes
4:1-24 HISTORY, Confession (3.35C)
Historical revelation carries meaning forward in history to other generations. Israel establish memorials to help them to remember and meditate on God’s mighty acts of deliverance. They formulated teaching confessions to pass on to future generations and remind them of God’s actions, which keep them alive in the nation’s mind.

4:4-7 EDUCATION, Object Lessons (5.74D)
Even a mound of collected stones, used as an object lesson, can serve as a powerful aid to learning the lessons of faith. The stones, taken from the river bed of the Jordan and set up as a memorial of God’s mighty act of miraculous power, became a powerful teaching tool for future generations. In every age God’s people have tangible reminders of the Lord’s guidance and deliverance: a tattered and much-read Bible, a pocket-sized New Testament carried though war, a church building, a much-used place of prayer, a hospital where God’s healing mercy was experienced, etc. Such varied and meaningful memorials can provide thought-provoking and vivid lessons of God’s providential care to each new generation.