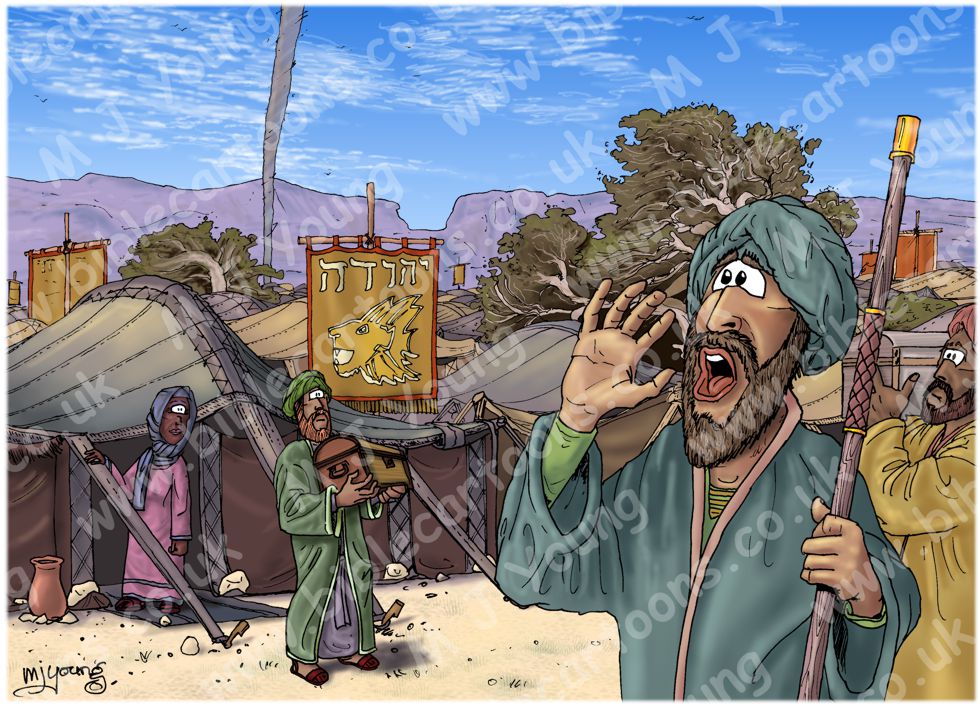 Joshua 3:1-5 (ANIV)
Crossing the Jordan
1 Early in the morning Joshua and all the Israelites set out from Shittim and went to the Jordan, where they camped before crossing over. 2 After three days the officers went throughout the camp, 3 giving orders to the people: “When you see the ark of the covenant of the Lord your God, and the priests, who are Levites, carrying it, you are to move out from your positions and follow it. 4 Then you will know which way to go, since you have never been this way before. But keep a distance of about a thousand yards [1] between you and the ark; do not go near it.”
5 Joshua told the people, “Consecrate yourselves, for tomorrow the Lord will do amazing things among you.”

LIGHTING NOTES:
The sun is high in the western sky (left), casting small shadows to the right of objects & people in this scene.

CHARACTERS PRESENT:
In the foreground there is one of the officers mentioned in verse 2, who can be seen shouting orders to the Hebrew people. He is carrying a gold-tipped staff or rod, which I use to denote his authority over the people.
There are a two Hebrew men behind the officer, carrying boxes or chests. There is a Hebrew woman standing near her tent opening, looking at & listening to the officer.

RESEARCH/ADDITIONAL NOTES:
In this scene you can see part of the tent camp of the Hebrew people. I based the design for the tents on photographs I found on the internet, of Bedouin tent designs & structures.

I created Hebrew tribal banners to differentiate the 12 tribes, one from another, in February 2011. Here’s a link to see them: Tribal banners

The tribal banner of Judah, with the lion’s head on it, is the one I have chosen to show in the scene above. There are actually four of these banners in the centre & on the left of the scene, but you can only see the front of one of them. I used yellow ochre (brown) colours for the original banner designs, which you can see displayed in this scene as well. According to the arrangement of the 12 tribes around the Tent of Meeting (at the centre of the camp) Judah was on the eastern side of the camp, along with the tribes of Issachar & Zebulun. Incidentally, you can see the back of 2 of the tribal banners of Issachar (the orange coloured ones) on the right of the scene.

Note, in the background you can see a column of smoke rising, that is the cloud that rises from the Tent of Meeting, representing the presence of God. The Tent of Meeting was positioned at the centre of the Hebrew camp.

The trees are Juniperus phoenicea – Phoenicean Juniper. I found some inspiring photo’s of Juniper trees on the internet, which look as if they have been bent over by strong, prevailing winds in a coastal setting. I really liked the shape of the trees, & so decided to make my juniper trees look the same. Although the wind is not blowing in my scene!


Bible Doctrine Notes
3:1-17 MIRACLE, Revelation (2.22C)
Miracles show that God is with us and they confirm a spiritual leader is God’s choice. They also give God’s people courage to face the task God has set for us. The miracle of the river Jordan crossing assured the people facing the monumental task of conquering an enemy land, that the “living God” was with them and that He would lead them to victory.
The river Jordan was in flood due to the seasonal melting of the snow on Mount Hermon, to the north. In other seasons the river would have been more easily crossed. God chose this annual flood time to impress upon His people His power to help them. Whether God used naturally occurring landslides to dam up the waters, or supernatural powers is not the main point of the story. In either instance God used His power to bring about an impressive miracle that encouraged the Hebrew people to step out in faith.

3:1-17 HISTORY, Deliverance (3.32D)
Historical deliverance extended beyond Moses and the Exodus. The new generation expereinced a divine miracle as evidence of God’s presence and provided a basis for trust that God would lead them to conquer the Promised Land.

3:4 GOD, Holy (1.11C)
There is a great difference between us as sinful human beings and the holy, almighty God, who occupies a unique category of existence. God promised to be present with His people, indicated by the ark of the covenant, but the Hebrew people were not to take His presence among them for granted. Great respect was required; expressed in this case by God’s instruction to keep their distance from His presence of a thousand yards (2000 cubits, or about 900 metres). The people were not to think of God as a possession, to be carried and used as they saw fit; such was the relational nature of foreigners nd their gods. The Hebrew people couldn’t just pack God into their luggage and move when they wanted too. Instead they had to wait upon the Lord and only move as and when God directed them too. They must not seek to relate to God in a presumptuous way. The instructions regarding keeping their distance from God’s presence was for the Hebrew people’s own safety. When encountering the holy, almighty God, we must also bear in mind the vast difference between ourselves and that holy God. We too must only approach God with fear and respect, seeking to obey and honour Him. he is no more our good luck charm than He was the private possession of the ancient Hebrew people. He is rightly the holy God who towers above His created people.