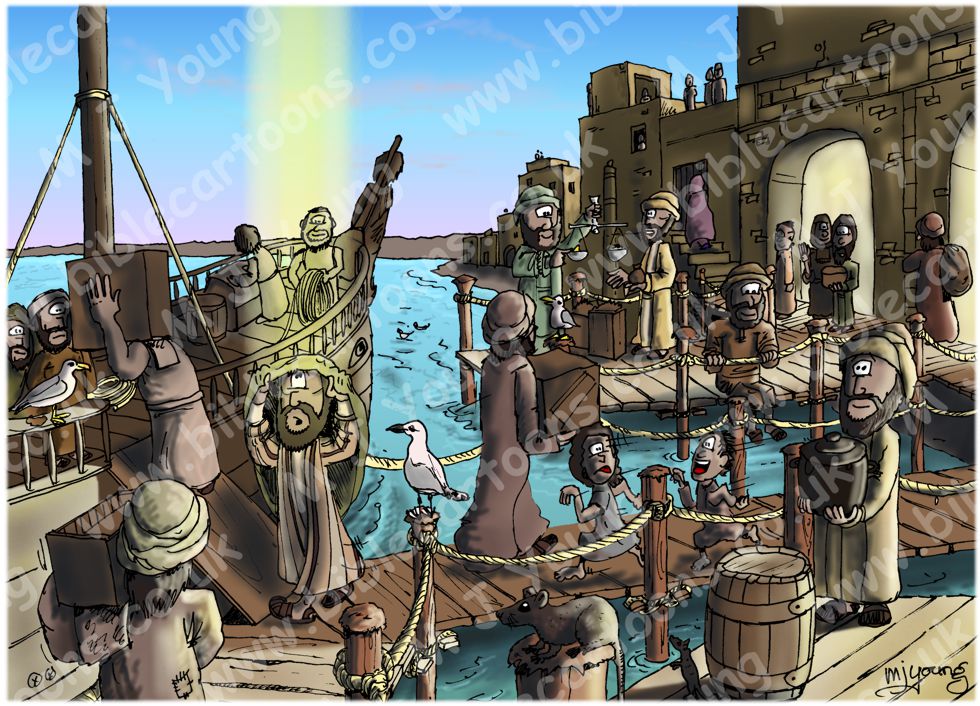 Jonah 1:3 (NLT)
But Jonah got up and went in the opposite direction in order to get away from the LORD. He went down to the seacoast, to the port of Joppa, where he found a ship leaving for Tarshish. He bought a ticket and went on board, hoping that by going away to the west he could escape from the LORD.

TIME OF DAY:
The scriptures don’t tell us what time of day Jonah got to the port of Joppa, so I have set the scene in the early morning, just after dawn.

LIGHTING NOTES:
Strong sunlight is coming from the east (right) & is shining through arch ways on the buildings on the right & forming alternating bands of sunlight & shadow.

CHARACTERS PRESENT:
Jonah can be seen with the Lord’s light shining down on him. Various other characters ca be seen: merchants, sailors, customers, etc. Notice the 2 children running & playing games down the wooden walkways, that lead out to the boats / ships.

Geological maps of the region reveal the port town/city of Jaffa to have been built on calcareous sandstone, hence the colour of the buildings in this scene.

There are 2 types of gulls depicted in this cartoon: black-biled gull (in the foreground) & yellow-legged gulls.
There are also 2 brown rats on the quey side.

We read (in verse 3) that Jonah’s hope was to go to Joppa & sail away into the west… “hoping that by going away to the west he could escape from the LORD.” One suggestion for this action was that Jonah may have considered that God was only resident in Judea; and Jonah’s reasoning might have been that if he got out of that land, the Lord might appoint another prophet to carry the message to Ninevah. It seems clear from the story that Jonah wanted to avoid what he may have considered a difficult & dangerous trek to Nineveh.