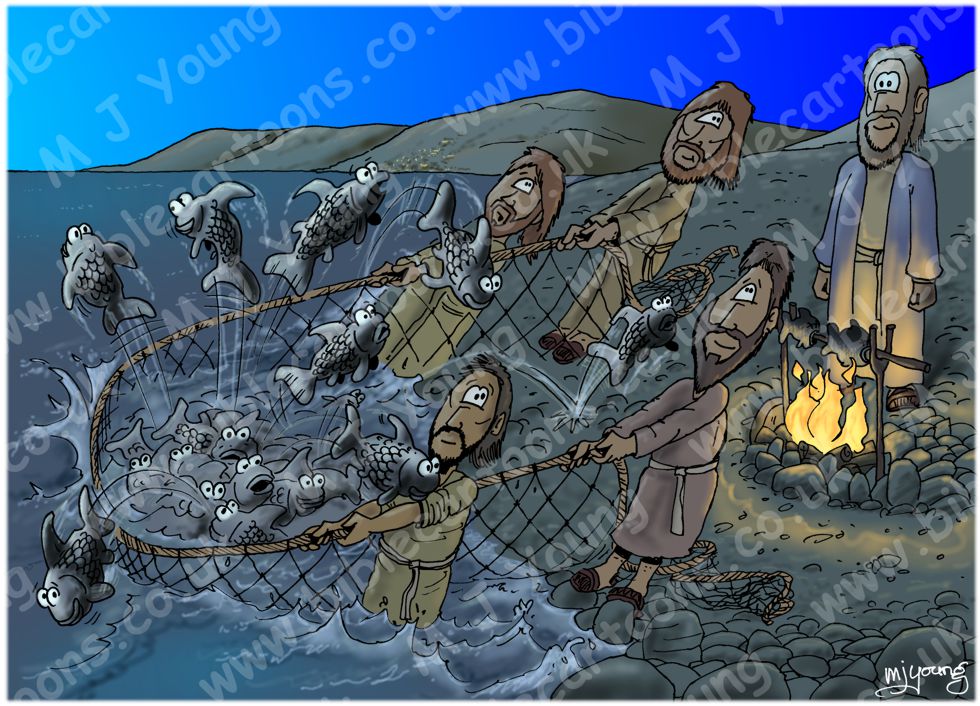 John 21:1-14 (NLT)
Jesus Appears to Seven Disciples
1 Later Jesus appeared again to the disciples beside the Sea of Galilee. [1] This is how it happened. 2 Several of the disciples were there—Simon Peter, Thomas (nicknamed the Twin [2]), Nathanael from Cana in Galilee, the sons of Zebedee, and two other disciples.
3 Simon Peter said, “I’m going fishing.”
“We’ll come, too,” they all said. So they went out in the boat, but they caught nothing all night.
4 At dawn the disciples saw Jesus standing on the beach, but they couldn’t see who he was. 5 He called out, “Friends, have you caught any fish?”
“No,” they replied.
6 Then he said, “Throw out your net on the right-hand side of the boat, and you’ll get plenty of fish!” So they did, and they couldn’t draw in the net because there were so many fish in it.
7 Then the disciple whom Jesus loved said to Peter, “It is the Lord!” When Simon Peter heard that it was the Lord, he put on his tunic (for he had stripped for work), jumped into the water, and swam ashore. 8 The others stayed with the boat and pulled the loaded net to the shore, for they were only out about three hundred feet. [3] 9 When they got there, they saw that a charcoal fire was burning and fish were frying over it, and there was bread.
10 “Bring some of the fish you’ve just caught,” Jesus said. 11 So Simon Peter went aboard and dragged the net to the shore. There were 153 large fish, and yet the net hadn’t torn.
12 “Now come and have some breakfast!” Jesus said. And no one dared ask him if he really was the Lord because they were sure of it. 13 Then Jesus served them the bread and the fish. 14 This was the third time Jesus had appeared to his disciples since he had been raised from the dead.

[1]
Greek, Sea of Tiberias, another name for the Sea of Galilee.

[2]
Greek, the one who was called Didymus.

TIME OF DAY:
Verse 4 informs us that it was dawn.

LIGHTING NOTES:
Sunight coming from the east (left of the viewer.)

CHARACTERS PRESENT:
Jesus (by the fire), & 4 of his disciples: James (son of Zebedee) & John (son of Zebedee) (from left to right, hauling the back of the net), Simon/Peter, on the front of the net, closest to Jesus, with Thomas/Didymus in the water.

RESEARCH/ADDITIONAL NOTES:
Google Earth position & orientation – 32°49’10.56“N 35°31’08.19“E looking due south.
This location is on the western shore of the Sea of Galillee (aka Lake Kinneret, Lake Tiberias) looking south towards the city of Tiberias. The slopes behind the city are called the hills of Tiberias, the tallest of which is called Bernike Hill. The slope to the right of the cartoon is the foothills of mount Arbel.

Whilst I was creating the cartoons based on John’s gospel (early in 2009), I worked out what each of Jesus’ disciples looked like, what they wore, colour schemes, etc. And of course, I worked out how I wanted to show Jesus Himself. For this cartoon it was simply a case of drawing the figures in action, & applying the characteristics I had already worked on. However, I drew this cartoon whilst on holiday (August 2009) in Anglesey, North Wales, & I hadn’t taken the character sheets for Jesus & His disciples with me. Therefore, I drew everything except the heads of the various people present & have only now (Oct 2009) inked it in & finished the drawing!