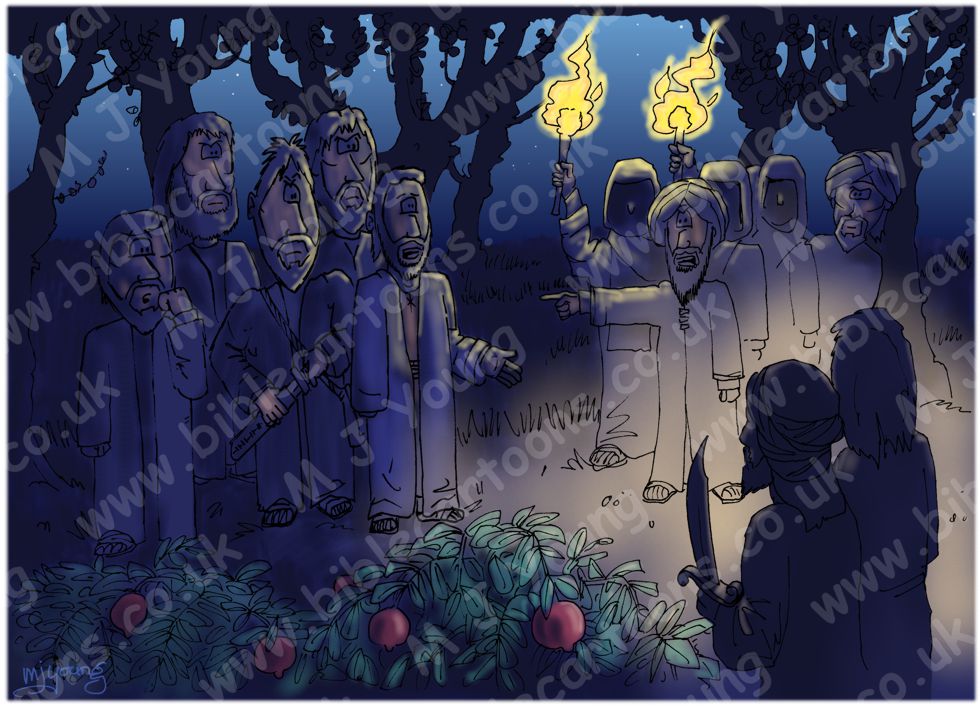 John 18:1-11 (NLT)
Jesus Is Betrayed and Arrested
1 After saying these things, Jesus crossed the Kidron Valley with his disciples and entered a grove of olive trees.

2 Judas, the betrayer, knew this place, because Jesus had gone there many times with his disciples. 3 The leading priests and Pharisees had given Judas a battalion of Roman soldiers and Temple guards to accompany him. Now with blazing torches, lanterns, and weapons, they arrived at the olive grove.
4 Jesus fully realized all that was going to happen to him. Stepping forward to meet them, he asked, “Whom are you looking for?”
5 “Jesus of Nazareth,” they replied.
“I am he”, [1] Jesus said. Judas was standing there with them when Jesus identified himself. 6 And as he said, “I am he,” they all fell backward to the ground!

7 Once more he asked them, “Whom are you searching for?”
And again they replied, “Jesus of Nazareth.”
8 “I told you that I am he,” Jesus said. “And since I am the one you want, let these others go.”

9 He did this to fulfill his own statement: “I have not lost a single one of those you gave me.” [2]
10 Then Simon Peter drew a sword and slashed off the right ear of Malchus, the high priest’s servant. 11 But Jesus said to Peter, “Put your sword back into its sheath. Shall I not drink from the cup the Father has given me?”

John 6:39 (NLT)
39 And this is the will of God, that I should not lose even one of all those he has given me, but that I should raise them to eternal life at the last day.

John 17:12 (NLT)
12 During my time here, I have kept them safe. [a] I guarded them so that not one was lost, except the one headed for destruction, as the Scriptures foretold.

[a]
Greek, I have kept in your name those whom you have given me.

TIME OF DAY: Night (hence the need for torches & lanterns.)

LIGHTING NOTES: I wanted flaming torch light to be the main light source, but the 2 foreground men also have a lantern with them, which produces the glow that silhouettes them & further illuminates the scene. The 3rd source of light is the cool, blue night sky, seen through the trees.

CHARACTERS PRESENT: On the left of the cartoon – Jesus, Simon Peter, Andrew, James (son of Zebedee) & John (son of Zebedee). On the right of the cartoon – A band of people who came to arrest Jesus, with a leader (Malchus?) who wears a turban. In the darkness he could be a pharisee!. Judas Iscariot is hovering in the background, on the right of the picture, also in a turban.
Although the text says “The leading priests and Pharisees had given Judas a battalion of Roman soldiers and Temple guards to accompany him.” I have only a few people present (the rest are off to the right!!!) & only non-military characters can be seen… or else the military men have cloaks & disguises over their armour, to avoid a public disorder reaction to Jesus’ arrest. That is how “The Passion” DVD interprets the scene, so I’ll go along with that!

Smith’s bible dictionary suggests that the garden or orchard, had olive, fig & pomegranates in it. Hence I have drawn olive trees behind the characters, & have pomegranate bushes in the foreground.

2018 Update: I have decided to add some cartoons showing Jesus and his disciples going to the garden of Gethsemane, followed by Jesus arrest. I have decided to keep this scene (John 18 – Gethsemane) intact and not replace it; it now forms a sort of “Title page” to the scenes illustrating the betrayal and arrest of Jesus in John chapter 18.