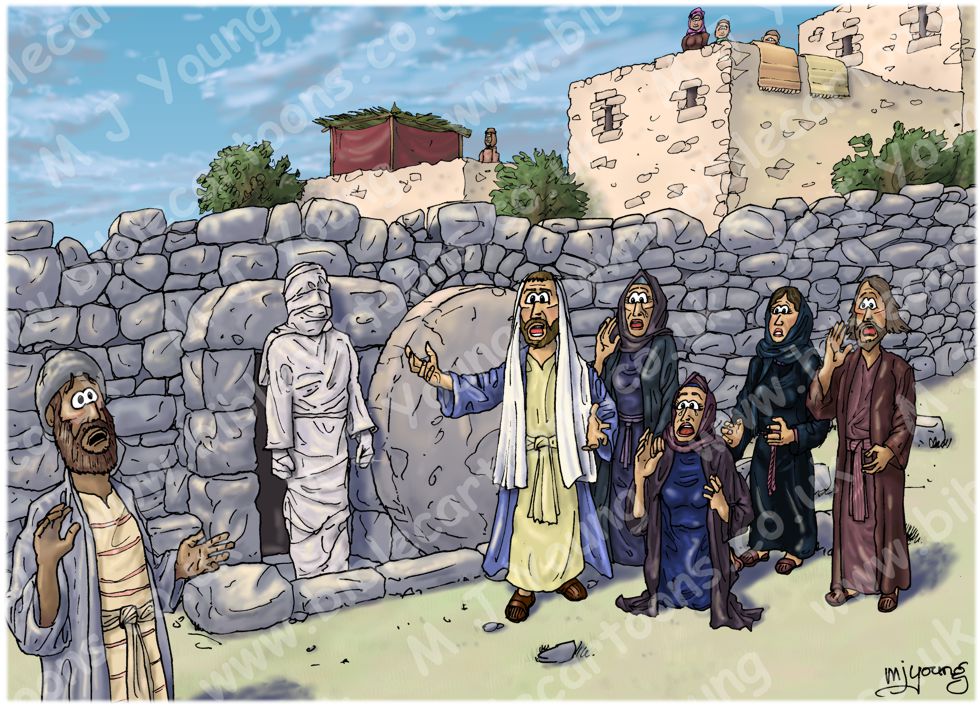 John 11:44 (ANIV)
The dead man came out, his hands and feet wrapped with strips of linen, and a cloth around his face. Jesus said to them, “Take off the grave clothes and let him go.”

LIGHTING NOTES:
Sunlight (above & behind the viewer) illuminates this scene. Cast shadows fall to the right & behind the figures.
In this version I have the sun slightly to the left of the tomb wall, so that dark blue shadows fall on this side of it. Notice the highlights on the top of the wall, & picking out a few of the wall stones.

CHARACTERS PRESENT:
Jesus the Christ is in the centre of the scene, in blue outer robe & with a white head scarf on. He is commanding Lazarus to come out of the tomb.
To the right of Jesus is Martha (standing) & her sister Mary (kneeling), both dressed in dark mourning clothing & looking astonished.
To the right of Mary & Martha is Mary Magdalene & Matthew/Levi.
I have removed the rest of the characters present (some of the crowd of mourners) which I drew in previous scenes.

02) (This page) John 11 – Lazarus resurrected – Scene 04 – Lazarus raised (Version 02). In which I have included dark blue shadows across the tomb wall & figures.

03) (Next page) John 11 – Lazarus resurrected – Scene 04 – Lazarus raised (Version 03). In this version I have removed the dark blue shadows, allowing full colour. There are cast shadows to the right of the figures & base of the tomb wall. This version is lighter for customers to project on screen &/or to print.

The colours of the skin, hair & clothes of Mary & Martha (Lazarus’ two sisters) were establish in Bible Cartoons I drew in March 2009 (e.g. John 12 – Jesus anointed at Bethany) I have used the same colours to maintain continuity in earlier scenes in this series (e.g. John 12 – Jesus anointed at Bethany). However, in the scene above (e.g John 11 – Lazarus resurrected – Scene 04 – Lazarus raised) I have drawn Mary & Martha in dark mourning clothes, rather than their previously established, lighter clothing colours.

The tomb rocks & particularly the retaining wall behind the tomb is based on a black & white photograph I found on the internet. The photograph was taken in the 19th century & shows people around the tomb of Lazarus in Bethany. I was keen to draw the rock wall & the tomb entrance rocks accurately.
I have used the same foreground & background scenery in this picture that I drew in a previous one (e.g John 11 – Lazarus resurrected – Scene 01 – Jesus at the tomb)