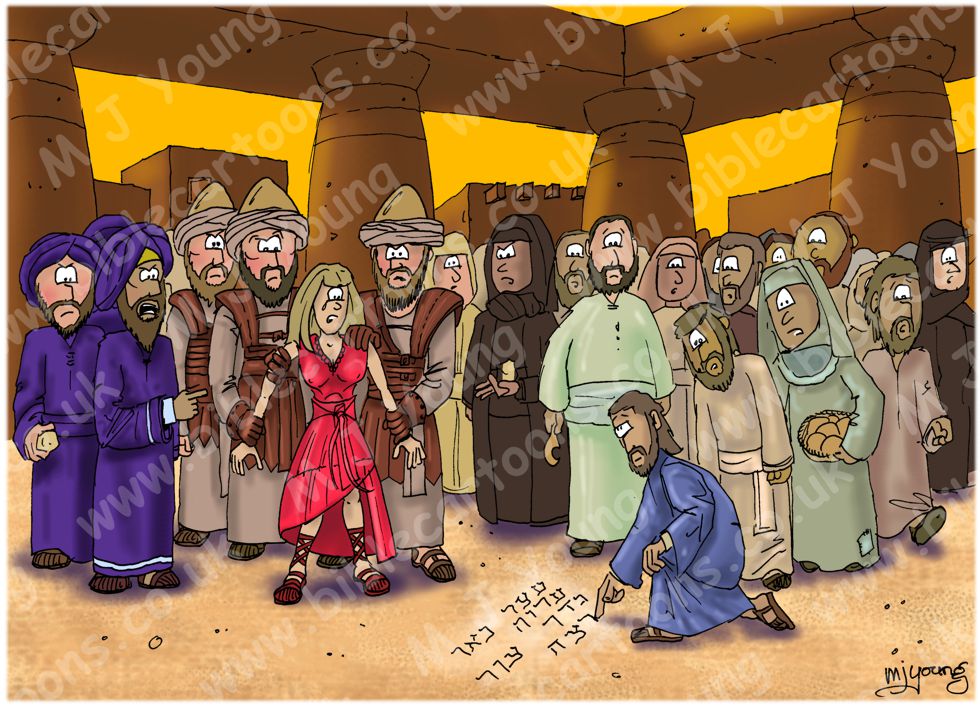 John 8:1-11 (NLT)
1 [1] But Jesus went to the Mount of Olives. 2 At dawn he appeared again in the temple courts, where all the people gathered round him, and he sat down to teach them. 3 The teachers of the law and the Pharisees brought in a woman caught in adultery. They made her stand before the group 4 and said to Jesus, “Teacher, this woman was caught in the act of adultery. 5 In the Law Moses commanded us to stone such women. Now what do you say?” 6 They were using this question as a trap, in order to have a basis for accusing him.
But Jesus bent down and started to write on the ground with his finger. 7 When they kept on questioning him, he straightened up and said to them, “If any one of you is without sin, let him be the first to throw a stone at her.” 8 Again he stooped down and wrote on the ground.
9 At this, those who heard began to go away one at a time, the older ones first, until only Jesus was left, with the woman still standing there. 10 Jesus straightened up and asked her, “Woman, where are they? Has no-one condemned you?”
11 “No-one, sir,” she said.
“Then neither do I condemn you,” Jesus declared. “Go now and leave your life of sin.”

[1]
The earliest and most reliable manuscripts and other ancient witnesses do not have John 7:53-8:11.

TIME OF DAY:
“early the next morning”

LIGHTING NOTES:
I decided upon a yellow sky to represent early morning, but didn’t put long, dark shadows in, as i felt that would detract from the drama of the scene.

CHARACTERS PRESENT:
Jesus, writing i the dirt, the woman accused of adultery, held by 2 burly temple guards. A Pharisee pointing at her, with other Pharisees & temple guards behind him.
Various people reacting to Jesus’ writing… a woman (in dark clothes) with a stone in her hand, obviously outraged at this woman’s sin, various people looking progressively more disturbed by Jesus’ writing. man & woman on extreme right who are walking away, looking sad, downcast, aware of their sin, etc.

RESEARCH/ADDITIONAL NOTES:
I decided that the temple could be large stone columns & spanning stones, but without a roof. There are a few buildings represented outside the temple’s columns.