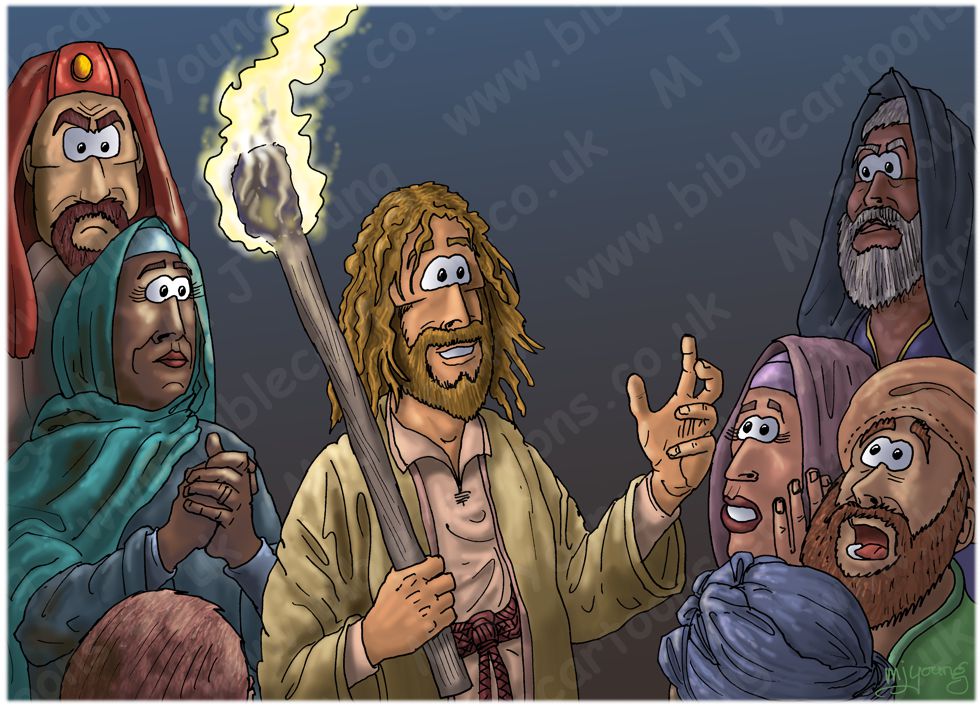 John 1:6-8 (ANIV)
6 There came a man who was sent from God; his name was John. 7 He came as a witness to testify concerning that light, so that through him all men might believe. 8 He himself was not the light; he came only as a witness to the light.

TIME OF DAY:
Unspecified in the Bible, I have set this scene in the evening.

LIGHTING NOTES:
The flaming torch held by John the Baptist illuminates this scene.

RESEARCH/ADDITIONAL NOTES:
There are two versions of this scene:
01) (Previous page) John 01 – The Word of life – Scene 03 – Light witness (Version 01). In which a pale yellow glowing figure of Jesus can be seen in the background. The background is darker, 7 there is additional glowing light around John’s flaming torch.

I first drew John the Baptist in December 2013. From that Bible Cartoon (Luke 01 – Births foretold – Scene 14 – John in wilderness) I was able to use the clothing design & colouring for these two versions in John’s gospel, 9 years later!

In this scene John the Baptist is telling everyone about Jesus the Messiah. The Sadducee & Pharisee represent those people in Jewish (& later Gentile) society who did not welcome Jesus into the world. The other people in this picture are displaying expressions of awe, fear, astonishment, love, respect, etc. I’m sure there were a lot of different opinions & reactions to John the Baptist’s bold, no-nonsense message about Jesus, which I have tried to illustrate in my picture.