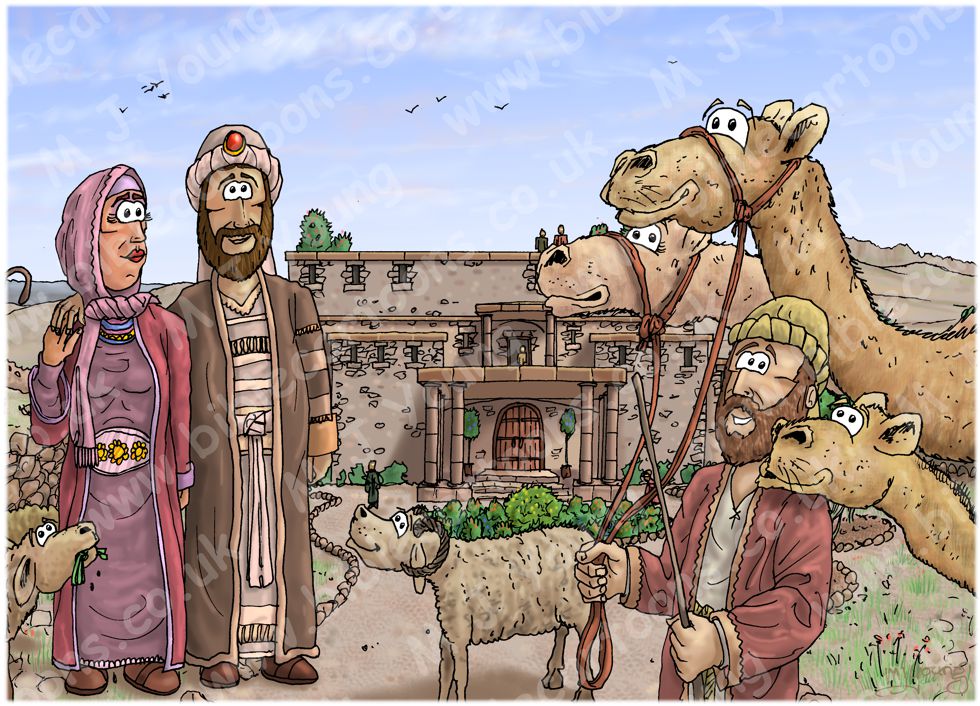 Job 1:1-3 (NLT)
Prologue
1 There was a man named Job who lived in the land of Uz. He was blameless, a man of complete integrity. He feared God and stayed away from evil. 2 He had seven sons and three daughters. 3 He owned seven thousand sheep, three thousand camels, five hundred teams of oxen, and five hundred female donkeys, and he employed many servants. He was, in fact, the richest person in that entire area.

TIME OF DAY:
Unspecified in Bible narrative. I have set this scene in the early to mid morning.

LIGHTING NOTES:
The sun is on the right hand side of the picture (out of view), & casts shadows to the left of figures, animals & objects.

RESEARCH/ADDITIONAL NOTES:
‘Î yôwb, ee-yobe’ (transliteration); is the translation into English we know as the name “Job”, which apparently means hated or persecuted. What an unfortunate name!

The picture I have drawn shows Job, his wife, their palatial house & some of the many animals he owned. The rich clothing Job & his wife wear, along with the splendid house, not to mention all the land & animals is all to illustrate the point made in verse 2 “He was, in fact, the richest person in that entire area.”

As with many things relating to the Holy Bible, the exact location of the land of Uz is a little uncertain (see note below: Where was the land of Uz?) Based on my research I will use scenery from Hauran at Deir Eiyub (Job’s monastery) near Nawa, which is east of the Sea of Galilee for photo reference purposes. Hauran is dominated by basalt, a dense igneous (lava) rock. Looking at photographs of the region, I note the rough, rocky landscape, with quite sparse vegetation, few trees & general drab, grey/brown appearance. This si reflected in my drawing, in that I have used muted greys & browns for the landscape, & also for Job’s house. Notice the sparse grasses in the landscape scene below. When the rains come, the landscape is much greener. I have drawn a little gardener figure, tending the flower beds, which again is evidence of Job’s wealth: that he could afford to dedicate land to pleasant gardens. Notice that Job’s house also has potted plants on the flat roofs.

A note about the writing structure of the book of Job.
In the short prologue (the first 5 verses of the book) a lot is presented to the reader, especially when you compare the speed of the descriptions found here with the much slower pace of the discussions & arguments that come in the following chapters (the rest of chapter 1-42). In this rapid prologue we get a description of Job’s spiritual character, we are told of his great wealth & large family, quickly followed by the Lord & Satan’s discussions, Satan’s accusations and attacks on Job, Job’s reactions, and the arrival of his friends. By contrast, the pace in the following dialogue (3:1-42:6) is slow. This quick narrative style in the prologue seems to provide a minimum of background information, then focusses the reader’s attention on Job’s agonizing confrontations with his friends and ultimately with the Lord God.

A note about Job’s character.
Job was blameless (“without moral blemish,” or “morally whole”) and upright (“straight” in the sense of not deviating from God’s standards). Also he feared God, that is, he was aware of, revered, and submitted to God’s majesty. And he shunned evil, rejecting the opposite of God’s character. That assessment, repeated by God to Satan (1:8; 2:3), shows that Job’s friends were totally wrong in accusing him of being a willful sinner.
[Source: Bible Knowledge Commentary]

It’s interesting to reflect on the Hebrew preoccupation of assuming sinfulness as a consequence to bad events befalling someone. I suppose that was/is a way of trying to understand why bad things happen to good people. There are many passages in the Bible where people try to assign guilt to a person or group of people, as a means of explaining why bad events have befallen them.
The book of Job helps to understand that “good” people can & do suffer, &, conversely, “bad” people sometimes seem to “get away with it”. That’s just the way life seems to work sometimes.
In any case, Job & his friends were not aware of Satan’s part in Job’s sufferings.

Where was the land of Uz?
Geographic definition
Though its geographic definition may vary, the Hauran generally consists of the following subregions: the Hauran plain, which forms the heart of the region; the mountains of Jabal Hauran (also known as ‘Jabal al-Druze’ or ‘Jabal al-Arab’) east of the plain; and the Lajat volcanic field to the north of Jabal Hauran. The region is bound to the north by the Ghouta and Marj plains around Damascus and to the south by the desert steppe of Jordan. Its western boundary is marked by the Ruqqad tributary, which separates it from the Golan Heights (al-Jawlan in Arabic). It is eastwardly bound by the al-Hamad and al-Safa desert steppes.

Topography
A common feature throughout the Hauran is the basaltic topography, though altitude and soil vary between the Hauran’s subregions. The Nuqrah, Jaydur and Jabal Hauran consist of arable land derived from decomposed basaltic, volcanic rock.
[Source: https://www.wikiwand.com/en/Hauran]

Though often identified with the land of Edom (southeast of the Dead Sea), the land of Uz was actually distinguished as being a different place in Jeremiah’s time, if not before (Jer. 25:20-21). [1] Uz was then a “daughter” of Edom, that is, a possession or neighbor of Edom (Lam. 4:21). [2] Some scholars suggest that Uz was in Bashan, south of Damascus; others say Uz lay east of Edom, in northern Arabia. The customs, vocabulary, and references to geography and natural history relate to northern Arabia. Whatever Uz’s location, it was near a desert (Job 1:19), it was fertile for agriculture and livestock-raising (1:3, 14; 42:12), and it was probably outside Palestine.
[Source: Bible Knowledge Commentary]

Uz
The home of the patriarch Job (Job 1:1; Jeremiah 25:20, “all the kings of the land of Uz”; Lament. 4:21, “daughter of Edom, that dwellest in the land of Uz”). The land of Uz was, no doubt, the pasturing-ground inhabited by one of the tribes of that name, if indeed there be more than one tribe intended. The following are the determining data occurring in the Book of Job. The country was subject to raids by Chaldeans and Sabeans (Job 1:15, 17); Job’s three friends were a Temanite, a Naamathite and a Shuhite (Job 2:11); Elihu was a Buzite (Job 32:2); and Job himself is called one of the children of the East (K?edhem). The Chaldeans (kasdim, descendants of Chesed, son of Nahor, Genesis 22:22) inhabited Mesopotamia; a branch of the Sabeans also appears to have taken up its abode in Northern Arabia. Teman (Genesis 36:11) is often synonymous with Edom. The meaning of the designation amathite is unknown, but Shuah was a son of Keturah the wife of Abraham (Genesis 25:2), and so connected with Nahor. Shuah is identified with Suhu, mentioned by Tiglath-pileser I as lying one day’s journey from Carchemish; and a “land of Uzza” is named by Shalmaneser II as being in the same neighborhood. Buz is a brother of Uz (“Huz,” Genesis 22:21) and son of Nahor. Esar-haddon, in an expedition toward the West, passed through Bazu and Hazu, no doubt the same tribes. Abraham sent his children, other than Isaac (so including Shuah), “eastward to the land of K?edhem” (Genesis 25:6). These factors point to the land of Uz as lying somewhere to the Northeast of Palestine. Tradition supports such a site. Josephus says “Uz founded Trachonitis and Damascus” (Ant., I, vi, 4). Arabian tradition places the scene of Job s sufferings in the Hauran at Deir Eiyub (Job’s monastery) near Nawa. There is a spring there, which he made to flow by striking the rock with his foot (Koran 38 41), and his tomb. The passage in the Koran is, however, also made to refer to Job’s Well.
—Thomas Hunter Weir
[Source: International Standard Bible Encyclopedia]

The land of Uz was the country in which Job lived (Job 1:1). The LXX renders it en chora te ’Ausitidi, and Ptolemy (5.19.2) says that the Aisitai, i.e., the Uzzites, dwelt in the Arabian Desert, W from Babylon, under the Caucabenes and adjacent to the Edomites of Mt. Seir, who at one period occupied Uz, probably as conquerors (Lament. 4:21). The position of the country may further be deduced from the native lands of Job’s friends—Eliphaz, the Temanite, being an Edomite; Elihu, the Buzite, probably a neighbor of the Chaldeans; and Bildad, the Shuhite, being one of the Bene-Kedem. “The land of Uz” is mentioned in only two other passages of Scripture; it is grouped by Jeremiah (Jeremiah 25:20) with Egypt, Philistia, Edom, and Moab, but in Lament. 4:21 he identifies it with a portion of Edom or affirms that some of the Edomites in his day inhabited Uz.
[Source: New Unger’s Bible Dictionary]

[1]
Jeremiah 25:19-23 (NLT)
19 I went to Egypt and spoke to Pharaoh, his officials, his princes, and his people. They, too, drank from that terrible cup, 20 along with all the foreigners living in that land. So did all the kings of the land of Uz and the kings of the Philistine cities of Ashkelon, Gaza, Ekron, and what remains of Ashdod. 21 Then I went to the nations of Edom, Moab, and Ammon, 22 and the kings of Tyre and Sidon, and the kings of the regions across the sea.
23 I went to Dedan, Tema, and Buz, and to the people who live in distant places.

[2]
Lamentations 4:21 (NLT)
21 Are you rejoicing in the land of Uz, O people of Edom? But you, too, must drink from the cup of the LORD’s anger. You, too, will be stripped naked in your drunkenness.

Here is the scene without the figures & animals in the foreground. 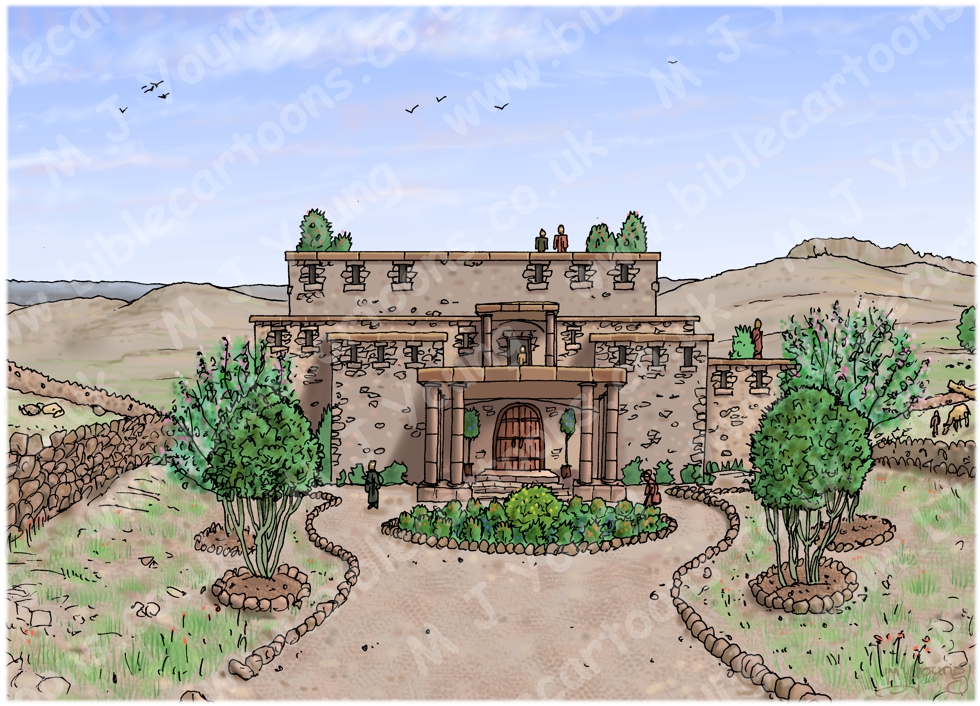 Here is the original, wide screen (A3) version. The faded edge rectangle is what I crop to, in order to make the finished Bible Cartoon. 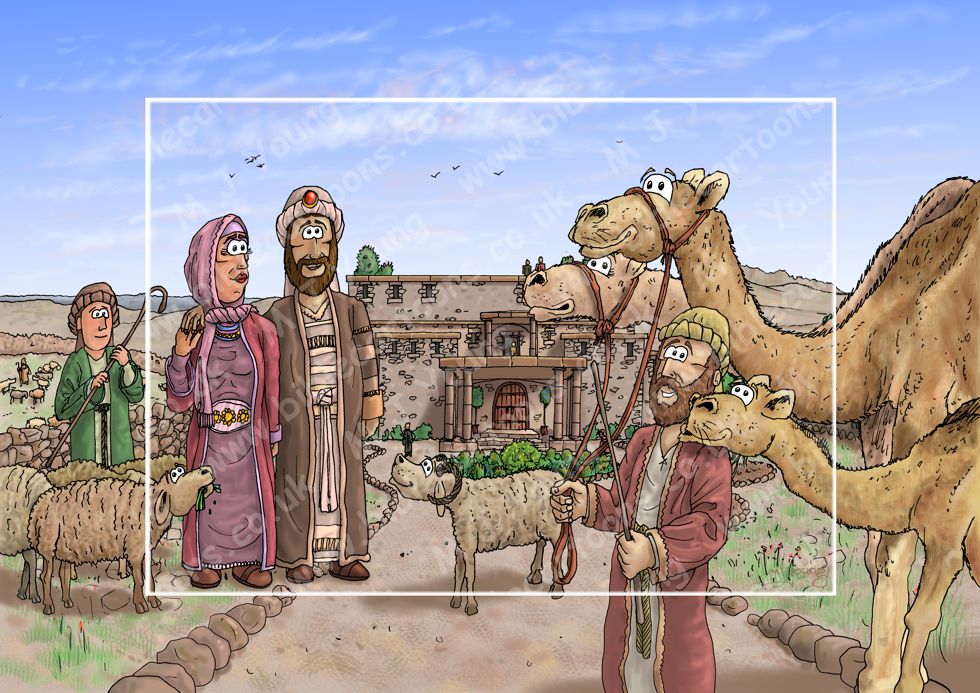