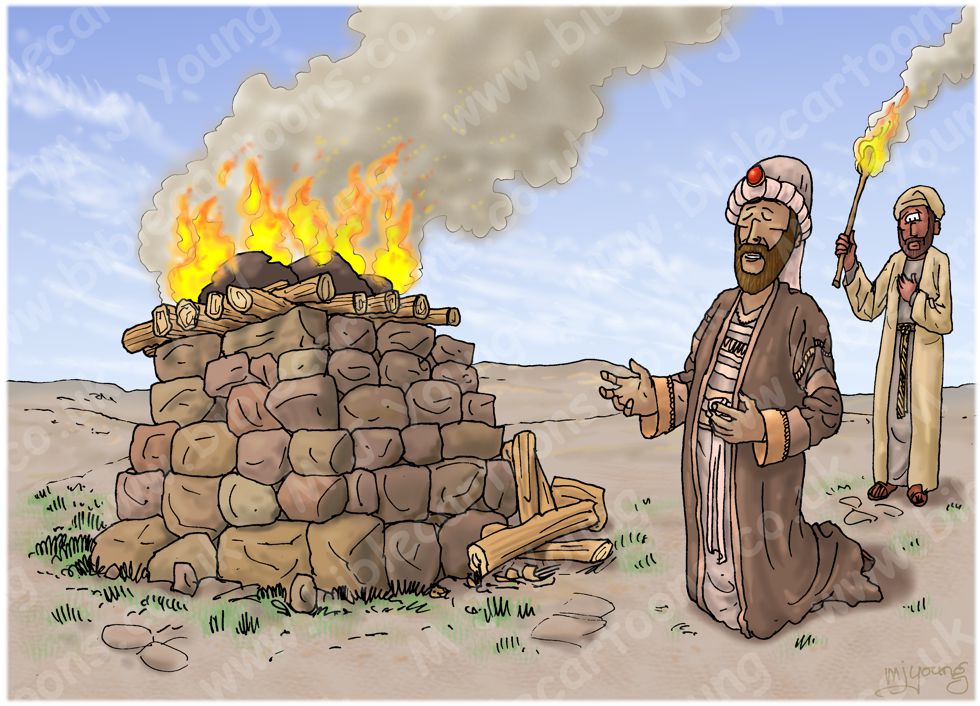 Job 1:4-5 (NLT)
4 Every year when Job’s sons had birthdays, they invited their brothers and sisters to join them for a celebration. On these occasions they would get together to eat and drink. 5 When these celebrations ended—and sometimes they lasted several days—Job would purify his children. He would get up early in the morning and offer a burnt offering for each of them. For Job said to himself, “Perhaps my children have sinned and have cursed God in their hearts.” This was Job’s regular practice.

TIME OF DAY:
Unspecified in Bible narrative. I have set this scene in the mid morning.

LIGHTING NOTES:
The sun (unseen, above & to the left) illuminates this scene, casting shadows below & to the right of figures & objects.

CHARACTERS PRESENT:
Job is kneeling in prayer to the Lord God, beside the uncut stone altar. A servant stands respectfully behind him, carriying a flaming torch, which Job used to burn his sacrifice on the wood, on top of the altar.

As with the previous scene, I have set this picture in Hauran which appears to be quite a desolate place, dominated by basalt, a dense igneous (lava) rock. Looking at photographs of the region, I note the rough, rocky landscape, with quite sparse vegetation, few trees & general drab, grey/brown appearance.

Each time his seven sons & three daughters held a feast in one of their homes (Note: only some of the Bible translations (eg NLT, AMP) mention the purpose of celebrating their birthdays), Job would purify (the Bible uses the term “sanctify”) them by giving 10 burnt offerings to the Lord, one for each child. I am not sure whether this would have been done locally (near Job’s home) or whether Job journeyed to a special place in order to conduct this offering. It all rather depends on when the book of Job was written… which is somewhat of a mystery (see note below). After the law was given to Moses by the Lord on Mount Sinai, & once the Israelites were established in the Promised Land, first Shiloh, then Jerusalem, was the typical place that such burnt offerings were presented to the Lord. There is a difficulty here, in that it is not known exactly when the book of Job was written. If it was written before Moses then there wouldn’t have been a Tabernacle to burn offerings at. If the book of Job was written before the Israelites even went to the Promised land, then Shiloh (the first location of the Tabernacle) or Jerusalem (the eventual location of the Temple) wouldn’t even have been built yet. Bearing the probable early writing date of the book of Job, I have elected to draw Job having set up a rough stone altar near his home, in the land of Uz.

Why did Job offer burnt offerings to the Lord?
Job was clearly concerned about his children’s spiritual welfare & that they receive forgiveness for any sins they may have committed (knowingly or unknowingly), that’s why he always offered to the Lord after their celebrations were over. Job’s concern that his children might inwardly cursed God anticipates (somewhat ironically) Satan’s insinuation that Job would curse God (see Job 2:5).
We know that Job was an exemplary person, since the Bible states that “He [Job] was blameless, a man of complete integrity.” in verse 1:1. No one deserved suffering less than Job did, and yet that is exactly what befell him.

When was the book of Job written?
Views on the time when Job lived range all the way from the Patriarchal Age (Abraham, Isaac, and Jacob—approximately 2100 to 1900 b.c.) to the sixth century b.c. Several factors point to the time of the patriarchs:

Who wrote the book of Job?
“No one knows who wrote the Book of Job, when it was written, when its events occurred, or where Job lived. These facts, shrouded in mystery, add to the book’s appeal and charm.
Suggestions on who may have authored the book include Job himself, Elihu (the fourth friend, who spoke toward the end of the book, chaps. 32-37), Moses, Solomon, Hezekiah, Isaiah, someone after the Babylonian Exile such as Ezra, and an anonymous author 200 years before Christ. Jewish tradition says that Moses wrote the book. Others argue for Solomon as the author because of his interest in poetic literature (e.g., Prov., Ecc., and Song) and a few similarities between Job and Proverbs (e.g., Job 28 and Prov. 8).”
[Source: Bible Knowledge Commentary]