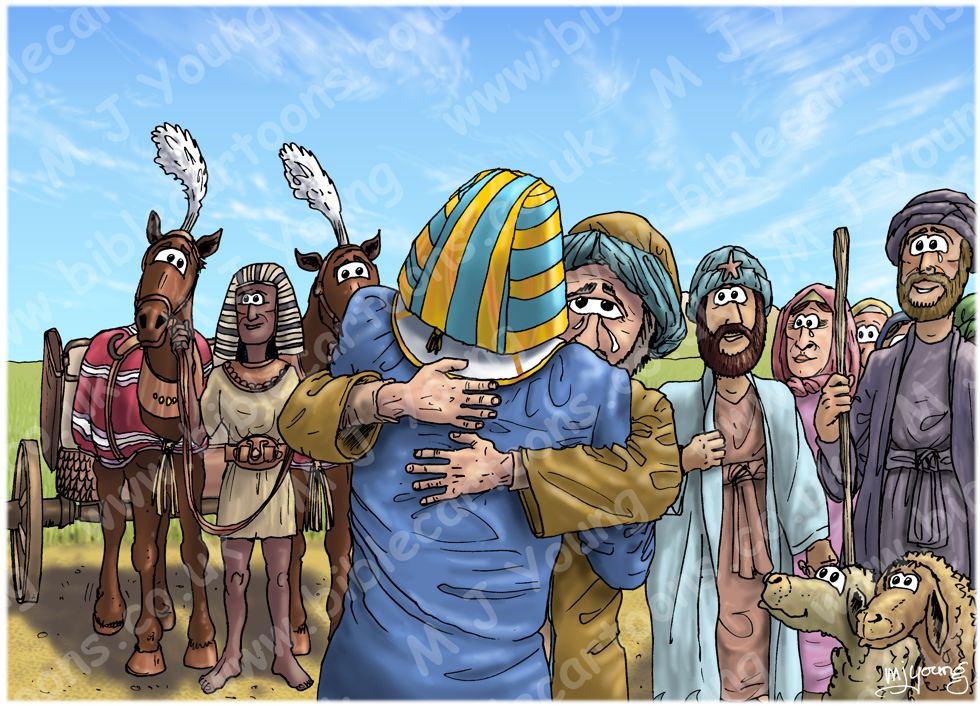 Genesis 46:28-29 (NLT)
28 [As they neared their destination, Jacob sent Judah ahead to meet Joseph and get directions to the region of Goshen.] And when they finally arrived there, 29 Joseph prepared his chariot and traveled to Goshen to meet his father, Jacob. When Joseph arrived, he embraced his father and wept, holding him for a long time.

TIME OF DAY:
Unspecified in Bible narrative. I have set the scene in the mid afternoon.

CHARACTERS PRESENT:
From left to right: an Egyptian charioteer, holding the two horses of Joseph’s chariot. Joseph (with his back to the viewer, dressed in Egyptian clothing) hugging his father Jacob. Zebulun (in blue), Dinah, Asher (in grape purple), various people behind the foreground figures.

RESEARCH/ADDITIONAL NOTES:
This scene shows Jacob/Israel meeting his long-lost son Joseph, after an arduous desert journey from Beersheba in Israel, to Goshen, in Egypt. Jacob/Israel had thought his son Joseph was dead, due to his other son’s deception. It must have been a happy reunion between Jospeh & Jacob/Israel after all this time.

After this reunion, Jacob/Israel’s family settled in Egypt.

The land of Goshen was a very fertile place, capable of supporting widespread agriculture. In my picture you can see green fields disappearing into the distance, which illustrates this point.

A note about men getting directions!
Notice verse 28, which says “Jacob sent Judah ahead to meet Joseph and get directions to the region of Goshen.” Apparently modern men are renowned for NOT asking for directions, even if they are hopelessly lost, but this verse just shows that in Biblical times that wasn’t the case… good to know!