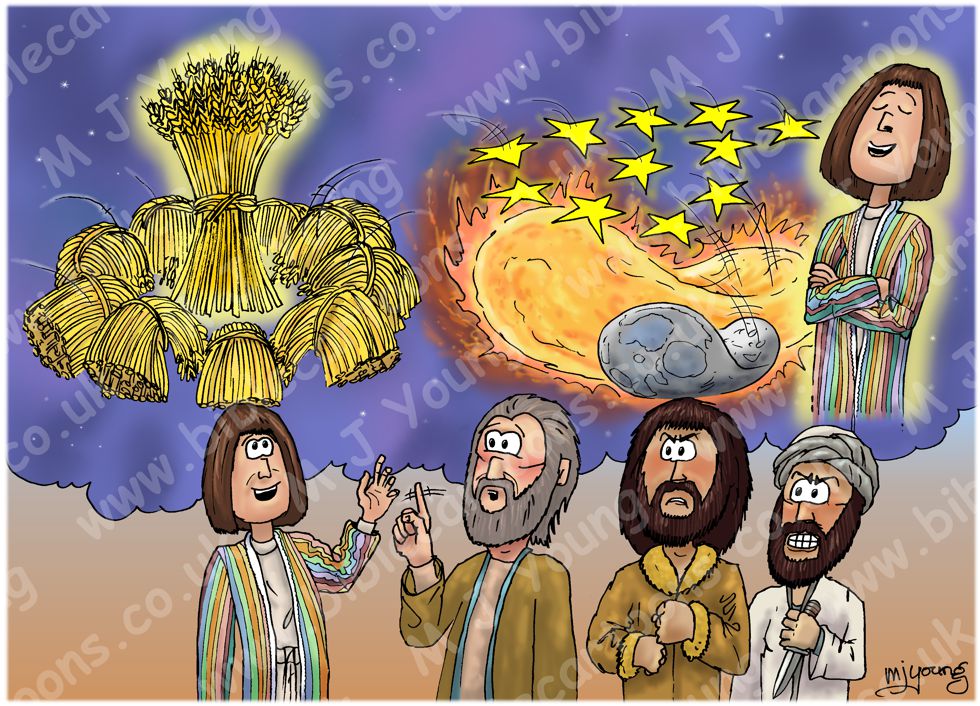 Genesis 37:5-11 (NLT)
5 One night Joseph had a dream, and when he told his brothers about it, they hated him more than ever. 6 “Listen to this dream,” he said. 7 “We were out in the field, tying up bundles of grain. Suddenly my bundle stood up, and your bundles all gathered around and bowed low before mine!”
8 His brothers responded, “So you think you will be our king, do you? Do you actually think you will reign over us?” And they hated him all the more because of his dreams and the way he talked about them.
9 Soon Joseph had another dream, and again he told his brothers about it. “Listen, I have had another dream,” he said. “The sun, moon, and eleven stars bowed low before me!”
10 This time he told the dream to his father as well as to his brothers, but his father scolded him. “What kind of dream is that?” he asked. “Will your mother and I and your brothers actually come and bow to the ground before you?” 11 But while his brothers were jealous of Joseph, his father wondered what the dreams meant.

TIME OF DAY:
Although the dreams took place at night, I imagine Joseph told his father and brothers about them in the morning, so I’ve set this scene at that time.

LIGHTING NOTES:
This is no strong lighting in this scene.

RESEARCH/ADDITIONAL NOTES:
I decided to combine the two dreams Joseph had into 1 cartoon, on the left is his first dream (Joseph’s brother’s grain bundles bowing down to his) and o the right is his second dream (The sun, moon, and eleven stars bowing low before Joseph). It was quite difficult to draw the sun and moon bowing down, but that’s what I was aiming for!

Two of Joseph’s brothers (Judah and Levi) are looking cross or angry in this cartoon because Joseph has just told them about his dreams. We know from Genesis 37 verse 8 that ..”they hated him all the more because of his dreams and the way he talked about them.”

The colours for the various characters in this scene were established in earlier cartoons, principally Genesis 37 – Joseph’s Dreams – Scene 02 – The coat of many colour.


Bible Doctrine Notes
37:5-11 MIRACLE, Nature (2.23A)
Joseph’s whole life bears witness to God’s providential care. Joseph’s dreams and ability to accurately interpret them showed him to be God’s revealer, yet few of his wise actions were supernatural, rather they involved the natural world. Even so, God used Joseph to achieve His purpose.