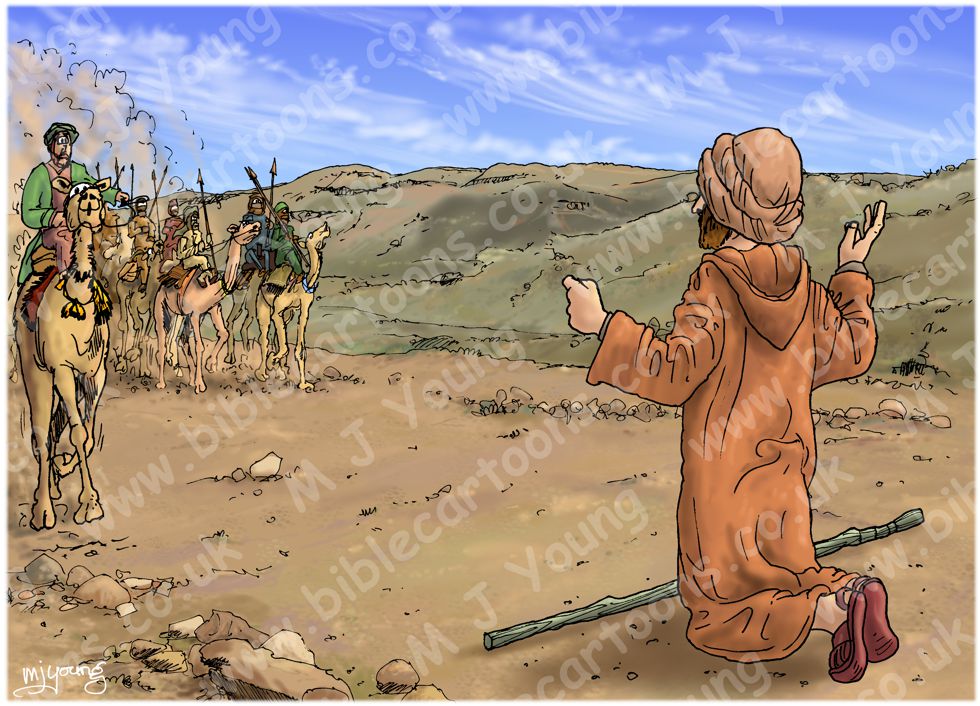 Genesis 33:1-3 (NLT)
1 Then Jacob looked up and saw Esau coming with his 400 men. So he divided the children among Leah, Rachel, and his two servant wives. 2 He put the servant wives and their children at the front, Leah and her children next, and Rachel and Joseph last. 3 Then Jacob went on ahead. As he approached his brother, he bowed to the ground seven times before him.

TIME OF DAY:
Not specified in Bible narrative.

LIGHTING NOTES:
The sun on the right of the scene casts shadows to the left of figures and objects.

CHARACTERS PRESENT:
Jacob is kneeling down in the foreground. Esau is the largest figure on a camel, on the left. Behind Esau is his 400 men also on camels.

RESEARCH/ADDITIONAL NOTES:
I decided to show Jacob kneeling towards his brother in a gesture of reconciliation and vulnerability. Certainly from the Bible narrative I think it is appropriate to deduce that Jacob was probably pretty worried about his twin brother’s intentions upon his arrival! I wonder if the Lord had used Jacob’s trials, work, encounters and struggles to produce a maturity and humility that had been lacking in his youth. Bearing that in mind it seemed appropriate to depict Jacob kneeling down in humility and deference before his brother.

Where did Jacob meet Esau?
We know from Genesis 31:17-21 that Jacob was working for his uncle Laban in Haran, in modern-day Syria. He left with his wives, children, servants and possessions, crossed the Euphrates river and headed for the hill country of Gilead, which is east of the river Jordan, in modern-day Jordan.

Genesis 32:1-2 informs us that Jacob’s journey continued once he’d met angels of God, calling the place Mahanaim, which means “Two camps”. Some Bible commentators believe that is possibly a reference to Jacob’s wealth, or else a reference to God’s camp & Jacob’s own.

Genesis 32:22 then informs us that “During the night Jacob got up and took his two wives, his two servant wives, and his eleven sons and crossed the Jabbok River with them.”

Genesis 32:30-32 tells us that Jacob camps at a place he calls Peniel, also called Penuel.

In chapter 33 Jacob “looked up and saw Esau coming with his 400 men.” After the brotherly reunion Esau heads back towards Seir in the south, whilst Jacob and his family go on to Succoth. Finally Genesis 33:18 informs us that Jacob cross over the Jordan river and arrives safely at Shechem, in the land of Canaan.

The map (see below) shows a possible route that Jacob may have taken to reach Shechem.

From these observations it is possible to describe where the encounter between Esau and Jacob was likely to have taken place. It came after Jacob left Peniel/Penuel and before he came to Succoth, in the hills east of the Jordan river and near the Jabbok River. I managed to find some photographs of that region and have used them to create this scene. 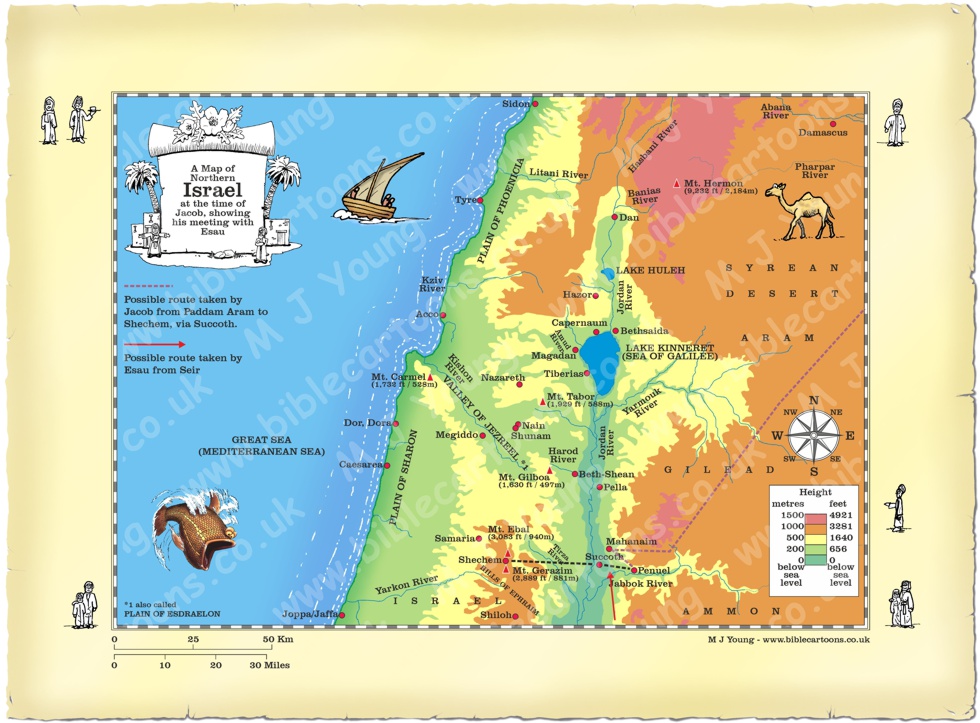 
Bible Doctrine Notes
33:1-10 HUMANITY, Image of God (2.41A)
When someone sees forgiveness and acceptance in another human being’s face they may be reminded them of God, for forgiveness is not a natural human trait, it is more Godlike than human. The best way to reflect God to other people is to forgive them freely, expecting nothing in return.