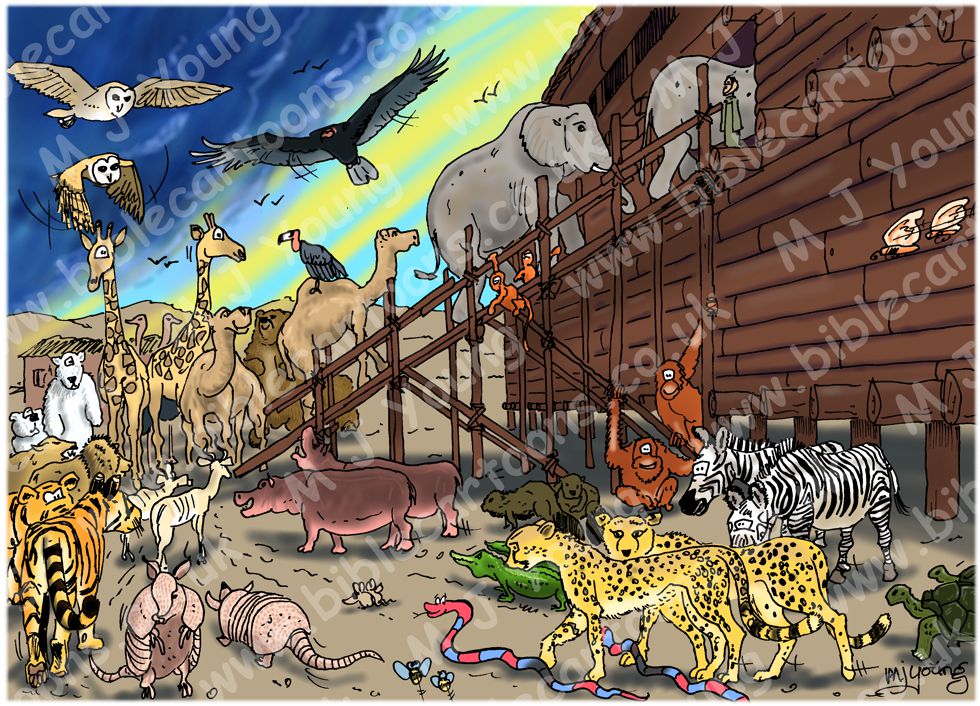 Genesis 7:1-9 (NLT)
1 When everything was ready, the Lord said to Noah, “Go into the boat with all your family, for among all the people of the earth, I can see that you alone are righteous. 2 Take with you seven pairs—male and female—of each animal I have approved for eating and for sacrifice [1], and take one pair of each of the others.
3 Also take seven pairs of every kind of bird. There must be a male and a female in each pair to ensure that all life will survive on the earth after the flood. 4 Seven days from now I will make the rains pour down on the earth. And it will rain for forty days and forty nights, until I have wiped from the earth all the living things I have created.”
5 So Noah did everything as the Lord commanded him. 6 Noah was 600 years old when the flood covered the earth. 7 He went on board the boat to escape the flood—he and his wife and his sons and their wives. 8 With them were all the various kinds of animals—those approved for eating and for sacrifice and those that were not—along with all the birds and the small animals that scurry along the ground. 9 They entered the boat in pairs, male and female, just as God had commanded Noah.

CHARACTERS PRESENT:
Apart from lots of different animals, Noah (son of Lamech) is supervising their self-loading from the top of the gang plank.


Bible Doctrine Notes
7:1-9:17 MIRACLE, Redemption (2.22B)
The miracles of God displayed here should create in us the same sense of awe and wonder as it did in the original witnesses. Since miracles display God’s power and purpose to save and judge, they have redemptive purpose. God used a unique flood to destroy sinners, but He also rescued one family and representative animals to begin again. God used nature: rain, rainbow and animals to achieve His purpose. He used the saved family of Noah to co-operate in the miracle, to announce it before it came to be, and to interpret it’s meaning. This all happen at God’s command and for His purpose. A wonderful part of this particular miracle is God’s promise never to repeat it.

7:1,7; 9:1-2 FAMILY, Accepting Covenant (5.84A)
In the midst of a generation spiralling down sin’s path, one family was found to be faithful enough to be spared the destruction by flood. After the flood God established His covenant with Noah and his family: reaffirming the creative intent of God for humans, and also included a powerful declaration of the value of life created in the image of God.
Accepting covenant relationship with God through families is central to God’s requirements in the OT. It’s ultimate expression is through the covenant of grace, found through Jesus the Christ.