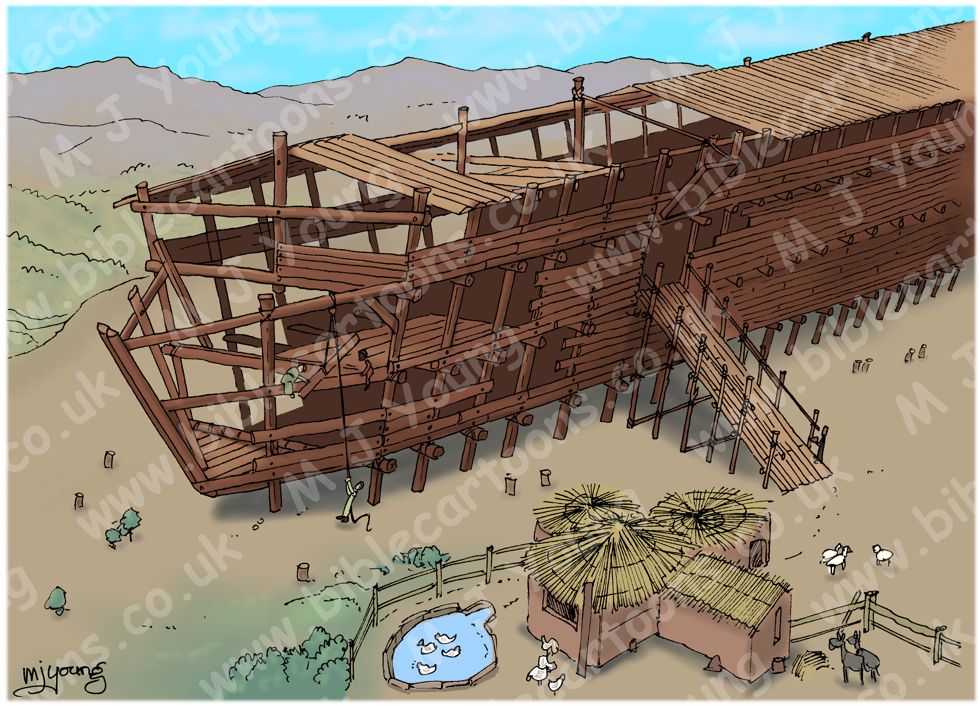 Genesis 6:11-22 (NLT)
11 Now God saw that the earth had become corrupt and was filled with violence. 12 God observed all this corruption in the world, for everyone on earth was corrupt. 13 So God said to Noah, “I have decided to destroy all living creatures, for they have filled the earth with violence. Yes, I will wipe them all out along with the earth!
14 “Build a large boat [1] from cypress wood [2] and waterproof it with tar, inside and out. Then construct decks and stalls throughout its interior. 15 Make the boat 450 feet long, 75 feet wide, and 45 feet high [3]. 16 Leave an 18-inch [4] opening below the roof all the way around the boat. Put the door on the side, and build three decks inside the boat—lower, middle, and upper.

17 “Look! I am about to cover the earth with a flood that will destroy every living thing that breathes. Everything on earth will die. 18 But I will confirm my covenant with you. So enter the boat—you and your wife and your sons and their wives. 19 Bring a pair of every kind of animal—a male and a female—into the boat with you to keep them alive during the flood. 20 Pairs of every kind of bird, and every kind of animal, and every kind of small animal that scurries along the ground, will come to you to be kept alive. 21 And be sure to take on board enough food for your family and for all the animals.”

22 So Noah did everything exactly as God had commanded him. Now the earth had become corrupt in God’s sight, and it was filled with violence.

LIGHTING NOTES:
Natural, from above


Bible Doctrine Notes
6:6-13 EVIL AND SUFFERING, Punishment (2.33A)
God’s response to human evil can be radical punishment. God chose to destroy the created order, which was dominated by human sin. God experiences grief, sorrow and disappointment over our evil choices and that decision not to do His will. But these emotions do not prevent Him from punishing sin and sinners. Even in punishment, God’s grace leads to reward for faithful obedience, out of which we get a new start through Noah and his family.

6:9,22 CHRISTIAN ETHICS, Moral Imperatives (4.42C)
Noah chose to obey God’s commands, he “walked with God” (v9). Like Noah we live under heavenly expectations of good conduct: moral imperatives placed on us by God. Christians walk with God, but also with other people. By conducting ourselves in righteous ways we live so that our actions bear just results for other people. Our ethical decisions include theological, social, relational, and consequential aspects.

6:18 THE CHURCH, Covenant People (5.11A)
God’s covenant promise first came as God announced devastating judgement on His creation. As God’s covenant people, we owe our very existence to God’s divine mercy and in that mercy He seeks to purify and redeem us from sin’s grip.