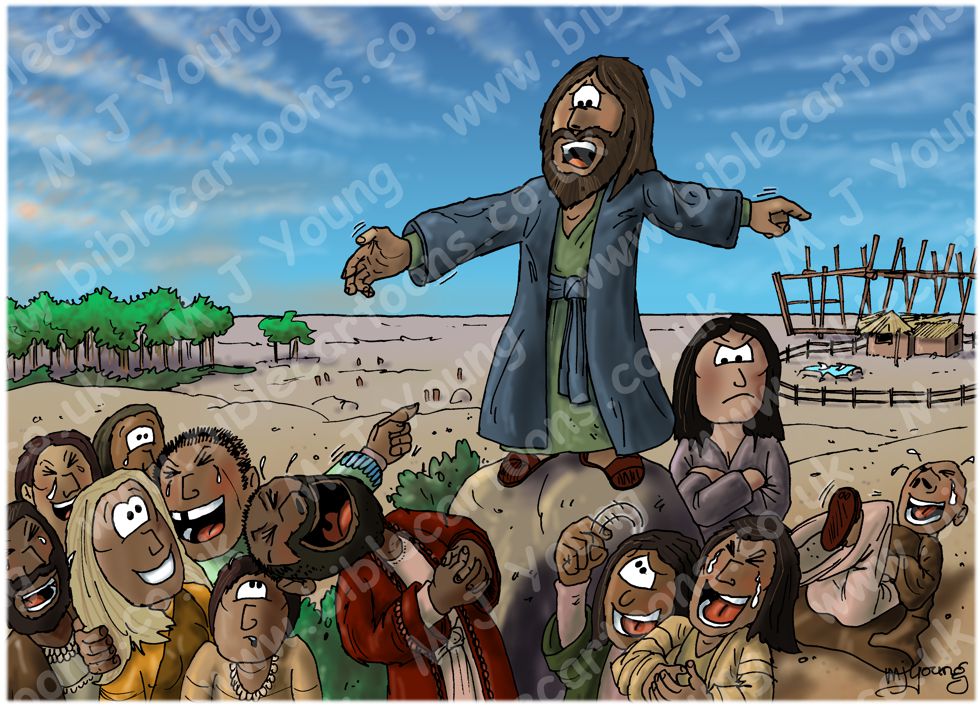 Genesis 6:1-10 (NLT)
1 Then the people began to multiply on the earth, and daughters were born to them. 2 The sons of God saw the beautiful women [1] and took any they wanted as their wives. 3 Then the Lord said, “My Spirit will not put up [2] with humans for such a long time, for they are only mortal flesh. In the future, their normal lifespan will be no more than 120 years.”
4 In those days, and for some time after, giant Nephilites lived on the earth, for whenever the sons of God had intercourse with women, they gave birth to children who became the heroes and famous warriors of ancient times.
5 The Lord observed the extent of human wickedness on the earth, and he saw that everything they thought or imagined was consistently and totally evil. 6 So the Lord was sorry he had ever made them and put them on the earth. It broke his heart. 7 And the Lord said, “I will wipe this human race I have created from the face of the earth. Yes, and I will destroy every living thing—all the people, the large animals, the small animals that scurry along the ground, and even the birds of the sky. I am sorry I ever made them.” 8 But Noah found favor with the Lord.
9 This is the account of Noah and his family. Noah was a righteous man, the only blameless person living on earth at the time, and he walked in close fellowship with God. 10 Noah was the father of three sons: Shem, Ham, and Japheth.

[2]
Greek version reads, will not remain in.

TIME OF DAY:
The scriptures do not specify a time. I have made it early morning.

CHARACTERS PRESENT:
Noah (son of Lamech, in green & blue), standing on a rock, preaching to the local people.
Noah’s wife, to his left, looking cross because the people are laughing at her husband!
Various local people.

RESEARCH/ADDITIONAL NOTES:
Having already drawn my version of the Ark, in the Genesis account of the Flood, I simply used my previous design in this picture. Similarly I have used my previous design & colourations for Noah & his wife in this cartoon. In this cartoon we see Noah busily trying to convince the crowd of locals of the impending flood. His preaching is falling on deaf ears – indeed, his audience are mostly convulsed with laughter, with tears running down their faces! Notice the reaction of the child behind the man in red, who seems to be pondering Noah’s warnings. Perhaps there were a few who listened to Noah’s words & wondered if there was any truth in them. However, we know from the account that only Noah, his wife, his three sons & there wives were eventually saved in the ark. So no-one else believed what Noah was saying.

A very similar thing occurs today: God warns people, through the message of the Bible & through the words of Christians, about his coming judgement upon the people of the earth. Many people do not believe in God, or his judgement, just like the vast majority of human beings alive in Noah’s day. But all those people were wrong about Noah & his plans to build the Ark, weren’t they? God’s judgement did come – & swept all but 8 human beings away to their deaths. The question we all face is this: what account will we give to God when we die & stand before his seat of judgement? If you have believed in his Son Jesus Christ, then you will have nothing to worry about. But if, like the people in my cartoon, you chose to reject Jesus Christ as your Lord & Saviour, then you can only expect to be rejected by God on that day of judgement. And if you are rejected by God, then that only leaves you with the prospect of an eternity in hell – a chilling thought. Perhaps as you read this you will feel the call of Jesus Christ on your life. Don’t delay, call on the name of Jesus right now, & be saved. That is an offer of life that none of us can ignore. See the Links page for information about how to become a Christian.

Where did Noah live?
The Bible does not specify where Noah was living before the flood. However, we do know where Abram (later renamed by God as Abraham) lived: Ur in the land of the Chaldees. Abraham’s native city (the city of Ur) is usually located in southern Babylonia, not very far from the ancient city of Uruk & about 150 miles from the head of the Persian Gulf. I have placed Noah in the same general area. This area is very flat, & is within the borders of modern day Iraq.

Did Noah preach to an unrepentant world?
There is some question about whether or not Noah preached to the people in the region where he lived. From the Genesis account itself there seems to be no evidence that Noah preached to anyone! However, Noah is mentioned by the apostle Peter in 2 Peter 2:5…”And God did not spare the ancient world—except for Noah and his family of seven. Noah warned the world of God’s righteous judgment. Then God destroyed the whole world of ungodly people with a vast flood.”

It says in 2 Peter 2:5 that “Noah warned the world of God’s righteous judgment”, which suggests that he did preach to the local people about God’s coming judgement.

The Life Application Concise NT Commentary has this to say on the subject:
‘Noah had warned the world of God’s righteous judgment, but no one believed him. God’s punishment is not arbitrary. Those who deserve punishment will receive his punishment; those who trust in him will receive his grace. Peter’s readers should understand the comparison—those who choose the wrong path face eternal consequences.’

Whilst The Bible Knowledge Commentary says:
‘Noah was a righteous man (Gen. 6:9), an obedient servant of God, and a shipbuilder (Gen. 6:13-22). Peter added that he was also a preacher (kēryka, “herald”) of righteousness, who spoke out against the vile corruption all around him.

The primary focus of 2 Peter 2:5 is the unsparing hand of God on the antediluvian civilization, the ancient world with its ungodly people. Do false teachers today think they can escape God’s judgment because of their large numbers? Peter reminded them and those who are the targets of their delusions that God can judge evil even when it involves the entire human race (with the exception of only eight people). The word brought (epaxas, past part. from epagō, “to bring on”) suggests the suddenness of God’s judgment in the Flood. Peter used the same verb in verse 1 in speaking of heretics who are “bringing” destruction on themselves.’


Bible Doctrine Notes
6:5-8 GOD, Wrath (1.14H)
The wrath of God is not a release of pent-up emotions, as it is in human beings. He doesn’t not have mood swings as we do. God’s wrath is evidence of His firm commitment to work out His righteous purposes. In dealing with us as sinners, God is very patient and long-suffering, but He will respond in sterner ways of judgement and retribution when necessary. When we do not respond to God’s love and grace, the hand of God that has blessed becomes the hand that chastise us, or destroys, if necessary. God is patient, constant and loving, but also faithful and just. He does everything that is necessary to achieve His purpose.

6:5 EVIL AND SUFFERING, Human Origin (2.31C)
Evil on earth is frequently a product of human decision-making. Evil includes secret, inner intentions as well as mor obvious public actions. Human will did not and does not improve with the passage of history and generations of people. Humans are more inclined to evil than good.

6:5 SIN, Depravity (2.11A)
As God viewed the inclination towards evil in humanity at this time He was grieved that He had made humanity. This passage shows our tendency towards evil rather than towards good; in theology this is called depravity: moral crookedness or perversion. When left to its own inclinations, human will tends towards sin. The cause of depravity is not discussed at length in the Bible. Some passages suggest depravity is inherited (see Psalm 51:5, Ephesians 2:1-3), while others suggest it is due to human choice (see Ezekiel 18:1-32, Romans 1:18-25).

6:6-13 EVIL AND SUFFERING, Punishment (2.33A)
God’s response to human evil can be radical punishment. God chose to destroy the created order, which was dominated by human sin. God experiences grief, sorrow and disappointment over our evil choices and that decision not to do His will. But these emotions do not prevent Him from punishing sin and sinners. Even in punishment, God’s grace leads to reward for faithful obedience, out of which we get a new start through Noah and his family.

6:8 SALVATION, Grace (4.22C)
God’s grace is His undeserved favour upon us. God favours those who choose to be upright in morality and conduct and who can therefore partner God in fulfilling His purpose.,

6:9 HISTORY, Linear (3.31B)
History is an ongoing account of God’s judgement and deliverance as He seeks to fulfil His purposes on earth.

6:9,22 CHRISTIAN ETHICS, Moral Imperatives (4.42C)
Noah chose to obey God’s commands, he “walked with God” (v9). Like Noah we live under heavenly expectations of good conduct: moral imperatives placed on us by God. Christians walk with God, but also with other people. By conducting ourselves in righteous ways we live so that our actions bear just results for other people. Our ethical decisions include theological, social, relational, and consequential aspects.

6:9 PRAYER, Fellowship with God (5.52A)
Practically every activity of mankind required during this early period of history, and this word “walk” also came to refer to the entire course of life itself. For example, Enoch was said to have “walked with God 300 years” (Genesis 5:22). Noah’s description similarly reads “he walked with God”.