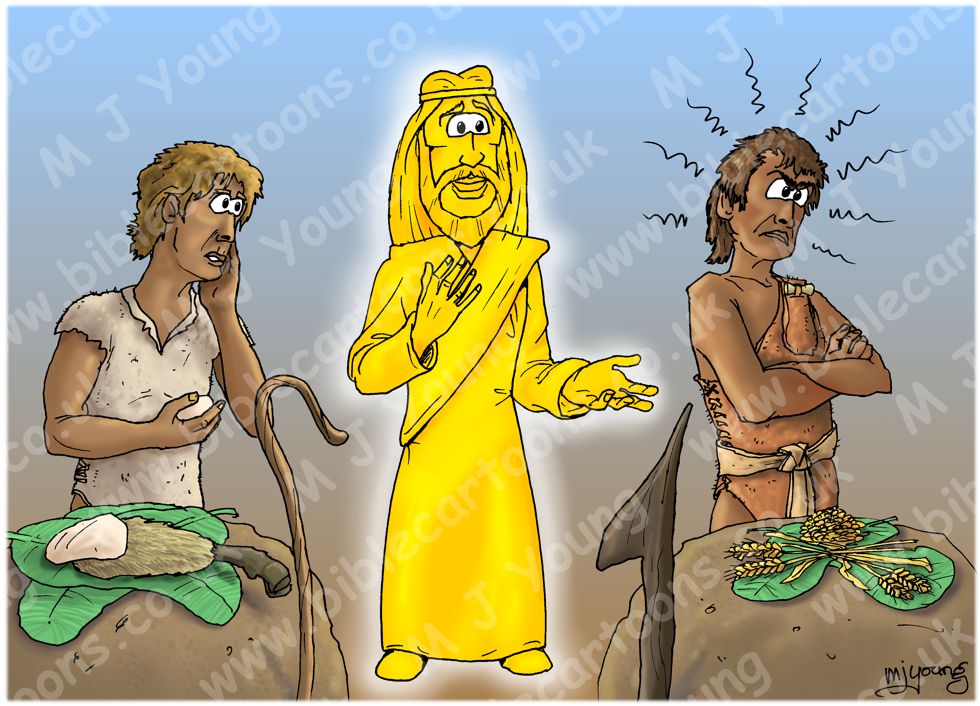 Genesis 4:3-7 (NLT)
3 When it was time for the harvest, Cain presented some of his crops as a gift to the Lord. 4 Abel also brought a gift—the best of the firstborn lambs from his flock. The Lord accepted Abel and his gift, 5 but he did not accept Cain and his gift. This made Cain very angry, and he looked dejected. 6 “Why are you so angry?” the Lord asked Cain. “Why do you look so dejected? 7 You will be accepted if you do what is right. But if you refuse to do what is right, then watch out! Sin is crouching at the door, eager to control you. But you must subdue it and be its master.”

LIGHTING NOTES:
The central figure (God) is the source of light in this scene, casting shadows on the sides of people and objects that face away from the central light source.

Both Abel and Cain have their sacrifices in front of them, presented on broad leaves, on large rocks. I was originally going to have the sacrifices in pottery dishes or woven fabric squares, but then I thought this story is so early in human history that weaving and pottery probably hadn’t been thought of yet! So I chose to keep the offering vessels as simple as they could be – just broad leafs taken from a tree. I’ve drawn banana leaves, since they would perform the function very well.

In similar fashion I wondered what Cain and Abel might be wearing. We know that God provided animal skin clothing for the brother’s parents, Adam and Eve (see Genesis 3:21) so I reasoned that Cain and Abel probably had the same attire. You may notice the crude stitching of the skins on the sides of the brother’s tunics. Cain also has a wooden toggle to fasten a shoulder strap of skins together.

I wanted to show the Lord God in this scene, explaining to Cain why He was rejecting his offering. God’s facial expression is that of a kind parent, patiently explaining His decision, whilst His hands are gesturing towards Cain in reconciliation. However, Cain is having none of it! He is consumed with anger, as verse 5 above explains.

I also wanted to show Abel demonstrating concern for his brother’s plight, so have him looking with an expression of pity towards Cain.

“In the story of Cain and Abel the seed of the woman met the seed of the serpent (3:15). Cain fell to the prey of the crouching evil and eventually went out to form a godless society, rejecting God’s way. The “way of Cain” (Jude 11), then, is a lack of faith which shows itself in envy of God’s dealings with the righteous, in murderous acts, in denial of responsibility, and in refusal to accept God’s punishment.

4:1-5. Cain and Abel were played off against each other, reversing the subjects clause after clause. In fact, the entire chapter contrasts them: Cain is mentioned 13 times in verses 1-16. Seven times Abel is mentioned, and three other times “brother” is substituted. Rightly the Apostle John saw murder as a sin against one’s brother (1 John 3:12, 15).

The nature of rebellious man unfolds in the person of Cain who had an auspicious beginning as the child of hope. But the narrative lines him up with the curse; he worked the soil (lit., ground, ʾădāmâh, Gen. 4:2; cf. 3:17). Abel, however, seems to be lined up with man’s original purpose, to have dominion over life (cf. 1:28); he kept flocks. These coincidental descriptions are enhanced with their actions in worship. Abel went out of his way to please God (which meant he had faith in God, Heb. 11:6), whereas Cain was simply discharging a duty. Abel’s actions were righteous, whereas Cain’s were evil (1 John 3:12). These two types of people are still present.
Cain’s lack of faith shows up in his response to God’s rejection of his offering of fruit (Gen. 4:5). Rather than being concerned about remedying the situation and pleasing God, he was very angry.

4:6-7. Cain was so angry he would not be talked out of his sin—even by God. Eve, however, had to be talked into her sin by Satan; but Cain “belonged to the evil one” (1 John 3:12). It is as if he could not wait to destroy his brother—a natural man’s solution to his own failure.

God’s advice was that if Cain would please God by doing what is right, all would be well. But if not sin would be crouching (rōb̠ēṣ is used here in the figure of a crouching animal) at his door, ready to overcome him. Sin desires to have Cain (these words show God’s interpretation of “desire,” the same Heb. word, in Gen. 3:16), but Cain could have the mastery over it. Here is the perpetual struggle between good and evil. Anyone filled with envy and strife is prey for the evil one.”
[Source: The Bible Knowledge Commentary]

The thing I find amazing and so encouraging in the Bible passage above is God’s explanation to Cain, “Sin is crouching at the door, eager to control you. But you must subdue it and be its master.”
I find that a wonderful encouragement because God says “you must subdue it and be its master.” Therefore it must be POSSIBLE to subdue sin and be its master – wow! Many people seem to think that sin just happens, or that they are powerless to prevent wrong-doing in their own lives. But clearly God thinks differently; and we must to, if we are to overcome our own carnal desires. I think this can be attempted by us, but in the end we need some Godly assistance to completely overcome sin. We need a saviour to deal the death-blow to sin itself in our lives; and Jesus is that saviour, who won for us complete victory over the power of sin in our lives, on the cross. Thank goodness it is possible to overcome sin, with Jesus’ help, completely and utterly. That is “good news” indeed!


Bible Doctrine Notes
4:2-11 STEWARDSHIP, Giving in Worship (4.52A6)
Not all gifts are pleasing to God, since our attitude in gift-giving is just as important as the gift itself. Giving is a vital component of our relationship with God: it is an important way in which we DO relate to God. God’s statement “if you do what is right” tells us that Cain was being told how to make his gift acceptable. In Matthew 5:23-24 Jesus told us that our attitudes and actions to other people makes our gifts to God acceptable or unacceptable.

4:3-7 WORSHIP, Individual (5.34C2)
God does not automatically accept all our acts of worship. The Bible does not tells us why Cain’s act of worship (gift-giving) was unacceptable to God. Even if we produce unacceptable worship, we have God’s promise that we will be accepted if we do what is right. In the New Testament Christ’s ultimate, perfect sacrifice on the cross provides perfect access to God the Father in heaven. Only through Jesus will our worship always be accepted.

4:6-12 SIN, Individual Choice (2.52B)
Cain’s jealousy of Abel, and his anger towards his brother, fuelled his murderous behaviour. Cain was not coerced into sinful action, he alone chose that course and so bore the consequences. He could not blame his parents for his own actions. We can not blame anyone else for the sinful choices and actions we take. Our parents and ancestors may well have sinned or acted wrongly, but our own life choices are fully our own responsibility.