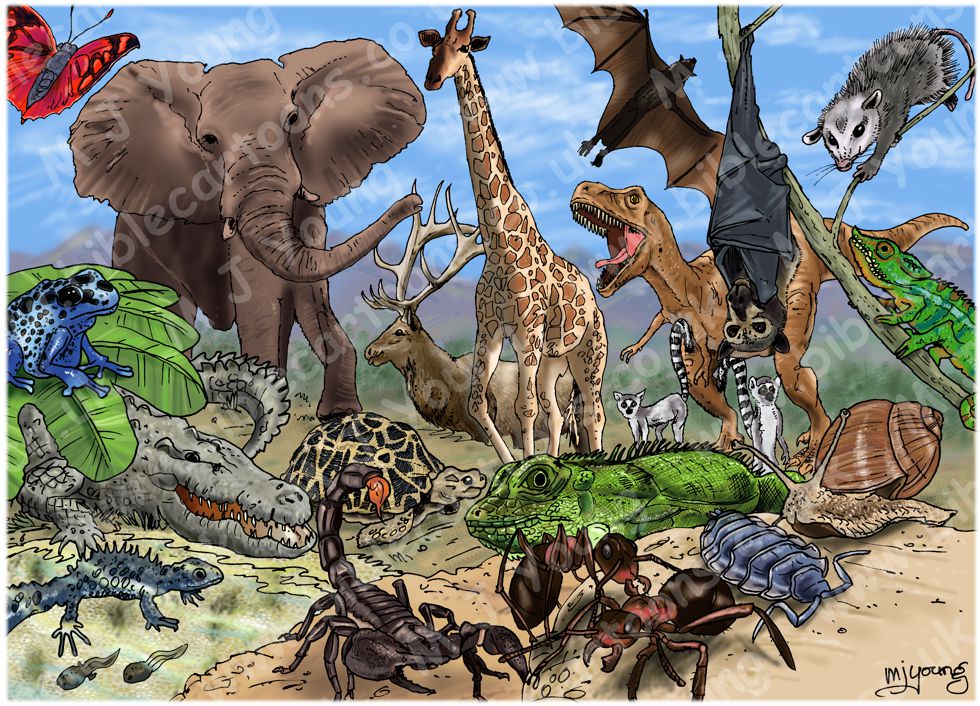 Genesis 1:24-25 (NLT)
24 Then God said, “Let the earth produce every sort of animal, each producing offspring of the same kind—livestock, small animals that scurry along the ground, and wild animals.” And that is what happened. 25 God made all sorts of wild animals, livestock, and small animals, each able to produce offspring of the same kind. And God saw that it was good.

LIGHTING NOTES:
Light is entering the scene from the sun above, diffused by the clouds.

CHARACTERS PRESENT:
God is present, of course. See below for the list of animals present in this scene.

RESEARCH/ADDITIONAL NOTES:
I wanted to represent the major groups of land animals in this scene which are:

Invertebrates – animals that lack a backbone. Invertebrates account for more than 97% of all species alive today. They include animal groups such as sponges, cnidarians, flatworms, molluscs, arthropods, insects, segmented worms, and echinoderms as well as many other lesser-known groups of animals.

Vertibrates – animals that have a backbone. When classifying these animals they can be divided up into 7 broad groups:

1) Agnatha – jawless fish that do not have scales which are the lampreys and hagfish.
2) Chondrichthyes – rough cartilage vertebrates rather than bone, such as sharks and rays.
3) Osteichtyes – bony fish. This group includes almost all fish. Skeletons are made of mostly bone. Includes: Sunfish, Catfish, Minnows, Perch, Goldfish, and most others, like tuna, bass, and salmon.
4) Amphibia – These animals have smooth skin, and most spend at least part of their life in water. Amphibians are cold-blooded. They usually have three life stages: egg, larva, adult. Includes: Frogs, Toads, Salamanders, and Newts.
5) Reptilia – These animals have dry, scaly skin that does not need to be kept wet. They are cold-blooded. Most reptiles lay soft-shelled eggs, but some bear live young. Includes: Lizards, Snakes, Turtles, and Crocodiles. 6) Aves – Birds are warm-blooded. They have hollow bones and feathers. Most can fly at least short distances. Birds are born from hard-shelled eggs. Includes: Raptors, Gulls, Songbirds, and Fowl.
7) Mammalia – These animals usually have hair/fur. They give birth to live young and feed their young with milk. Mammals are warm-blooded. Includes: Rodents, Hoofed animals, Marsupials, Bats, Rabbits, Weasels, Raccoons, Bears, Dogs, and Cats.

I have drawn representatives of groups 4, 5 & 7 (Amphibians, Reptiles & Mammals) in this scene.

Here is a copy of the cartoon above, with numbered key to identify the animals: 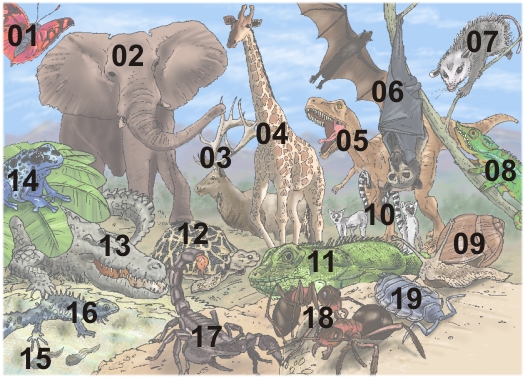