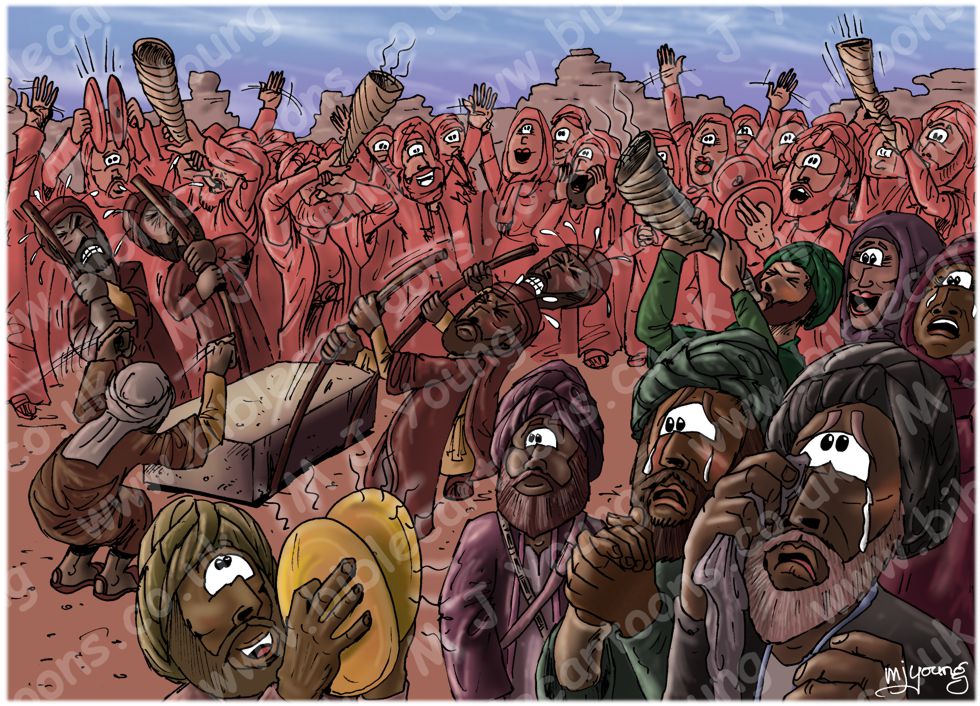 Ezra 3:10-13 (ANIV)
Rebuilding the Temple
10 When the builders laid the foundation of the temple of the Lord, the priests in their vestments and with trumpets, and the Levites (the sons of Asaph) with cymbals, took their places to praise the Lord, as prescribed by David king of Israel. 11 With praise and thanksgiving they sang to the Lord:

“He is good;
his love to Israel endures for ever.”

And all the people gave a great shout of praise to the Lord, because the foundation of the house of the Lord was laid. 12 But many of the older priests and Levites and family heads, who had seen the former temple, wept aloud when they saw the foundation of this temple being laid, while many others shouted for joy. 13 No-one could distinguish the sound of the shouts of joy from the sound of weeping, because the people made so much noise. And the sound was heard far away.

TIME OF DAY:
Not specified in the text. I have set the scene during mid morning.

LIGHTING NOTES:
Light comes from the sun, on the left.

CHARACTERS PRESENT:
Ezra is the man in purple robes in the front centre of the picture. To the right are some tearful older priests, remembering the former glory of the first temple.
To the front left is a younger priest, clashing cymbals together & celebrating the laying of the new temple’s foundation stone. Behind the front group of people we can see five builders, all wearing the same brown garments. Four of the builders are straining to position the large foundation stone, using wooden beams, the fifth builder is directing their efforts.
Behind the builders is a multitude of priests, men & women who are praying, clashing cymbals, blowing shofar (ram’s horns) & celebrating.

RESEARCH/ADDITIONAL NOTES:
Ezra 3:1 reads, ‘When the seventh month was come…’ or the latter part of our September, and beginning of October.

The Israelites had left Babylon during the spring of this year, which was 538 BC. On arriving in Jerusalem I imagine the returning exiles put up tents or else constructed themselves wooden huts to shelter in, whilst the Temple was to be reconstructed.

Ezra 3:8 reads, ‘In the second month of the second year after their arrival at the house of God in Jerusalem…’ so the laying of the second temple’s foundation stones occurred in 536 BC.

The scripture clearly says that the people celebrated the laying of the new foundation stone of the new temple. However, many of the older priests, Levites and heads of families wept aloud when they saw the foundation of this temple being laid, because they remembered the old (Solomon’s) temple, in all its glory. The scripture also points out that the sounds of celebration (or sadness) could be heard from a long way away. This is why I have some people with tears & looking sad, whilst others are happy & celebrating.

Ezra was a scribe, a priest who led the second expedition of Jews back from Babylonian exile. He was the author of the book bearing his name. Ezra 7:10 (AMP) states, ‘For Ezra had prepared and set his heart to seek the Law of the Lord [to inquire for it and of it, to require and yearn for it], and to do and teach in Israel its statutes and its ordinances.’ He was thus devote & completely dedicated to teaching the law of Moses to his people.

I decided to keep my use of colour restricted for this scene, especially in the background crowds of people, using only a few shades of the earth-red colour, to maintain some cohesion. Lots of colour & jarring colours/tones can be very distracting to the main subject, which in this case is Ezra himself, the builders & the foundation stone being laid.

View all Bible Cartoons in Ezra Go to Search by Bible Book page Do I need High or Medium qlty cartoons? FAQ’s