Exodus 14:5 (ANIV)
When the king of Egypt was told that the people had fled, Pharaoh and his officials changed their minds about them and said, “What have we done? We have let the Israelites go and have lost their services!”

LIGHTING NOTES:
This scene is set inside the king of Egypt’s (Pharaoh’s) palace, & is illuminated by torchlight. The first torch, or oil lamp can be seen in the middle of the scene, with the glow from the second visible on the left of the picture.

CHARACTERS PRESENT:
The king of Egypt (Pharaoh) is sitting on his golden throne, shouting.
Behind him & to the left is one of the 2 feather wafting girls I’ve shown in previous scenes. There uis also a large guard, complete with huge copper axe-like sword. I have introduced a young flute or recorder-playing girl into this scene, sitting on the platform steps. I believe king’s have often had musicians & other entertainers in their presence, for their distraction or amusement.
There are 3 magicians/advisers at the foot of the steps, leading up to Pharaoh. One is dressed predominantly in red, the next in shades of purple & the last is in blue. The last magician I have depicted in previous cartoons: The 10 plagues of Egypt: the plague of gnats, the plague of boils. He can also be seen in the next scene of this series: Exodus 14 – Parting of the Red Sea – Scene 03 – Pharaoh’s chariot, which I completed before this Pharaoh’s court one!

RESEARCH/ADDITIONAL NOTES:
There are two versions of this scene:
01) (This page) Exodus 14 – Parting of the Red Sea – Scene 02 – Pharaoh’s court (Version 01). This is the original version, with the girl flutist (sitting on the steps) dressed in thin, translucent pink clothing.

02) (Next page) Exodus 14 – Parting of the Red Sea – Scene 02 – Pharaoh’s court (Version 02). This is the newer, more modest version (specifically requested by a customer) which makes the girl flutist’s clothing more opaque (less see through) & covering her legs. This version also has Moses & Aaron kneeling before Pharaoh on the court carpet.

This is an entirely fictional scene, made up from my imagination. However, I did use photographic reference for the costume, Pharaoh’s gold throne & the Egyptian tapestry. I don’t know if Pharaoh sat on top of a raised platform, as I have depicted him. That seems very plausible though, as heads of state like to make themselves seem look important!

I have put the advisors & important courtiers in this scene in thick, expensive looking clothing. In reality, I suppose that the hot climate of Egypt would preclude people from wearing such heavy & stifling clothing. However, this is the means I have decided to employ, to show that they are rich & important people!

I copied the hieroglyphics from a photograph of an actual Egyptian tapestry… mostly! OK, so I have included some non-standard Egyptian hieroglyphics: an ipod, a bottle of wine, a spaceship with astronaut, a wellington boot, a Viking war ship, a motor car, & a Diplodocus dinosaur! Sometimes I just want to have fun! 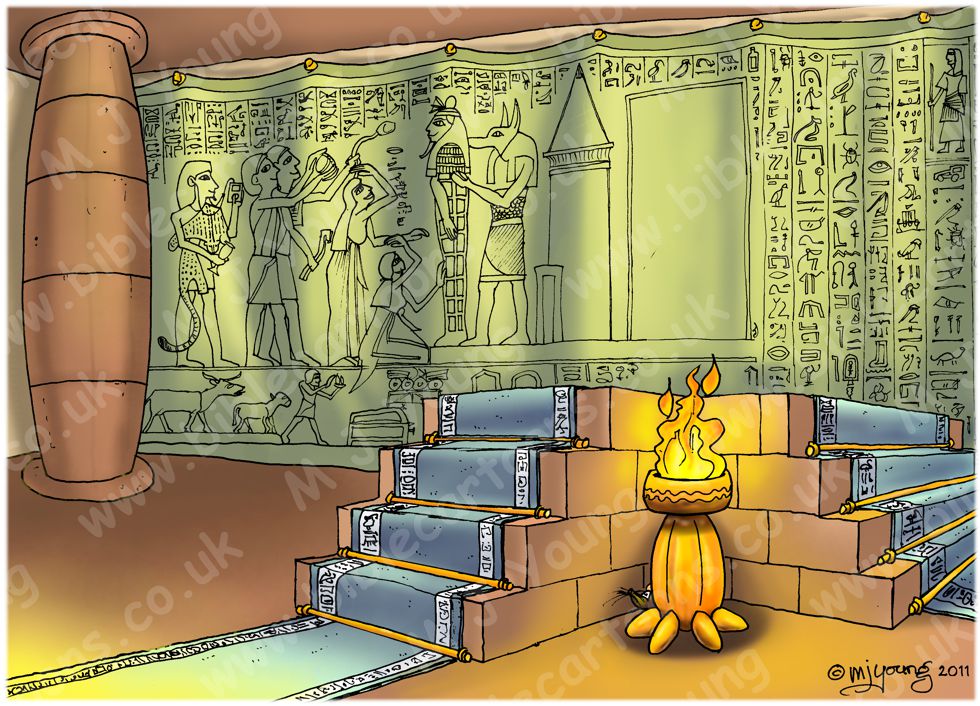