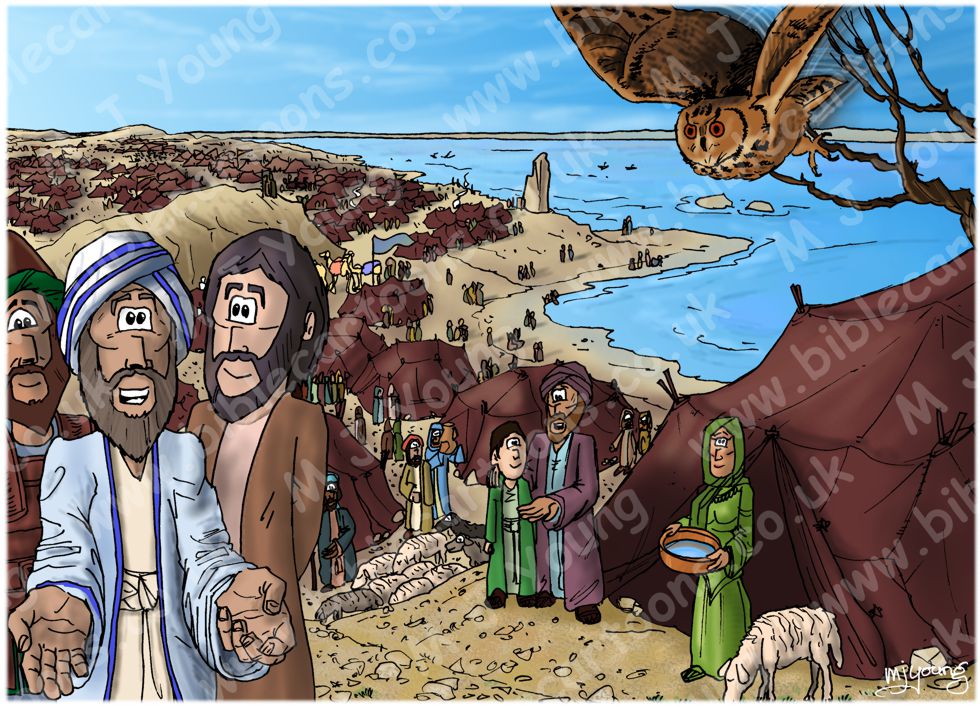 Exodus 14:1-4 (ANIV)
1 Then the Lord said to Moses, 2 “Tell the Israelites to turn back and camp near Pi Hahiroth, between Migdol and the sea [The Red Sea]. They are to camp by the sea, directly opposite Baal Zephon. 3 Pharaoh will think, ‘The Israelites are wandering around the land in confusion, hemmed in by the desert.’ 4 And I will harden Pharaoh’s heart, and he will pursue them. But I will gain glory for myself through Pharaoh and all his army, and the Egyptians will know that I am the Lord.” So the Israelites did this.

TIME OF DAY:
The above scripture doesn’t specify the time. I’ve set this scene in the mid afternoon. The sun is on the left of the scene, in the west.

CHARACTERS PRESENT:
Moses in the left foreground, with Joshua (son of Nun) behind him & Aaron to the right. Various Hebrew people, with flocks of sheep grazing. In the middle distance, just behind Aarons left shoulder you may be able to make out a line of camels!
The bird launching itself into flight is a Pharaoh Eagle-owl (Bubo ascalaphus.) I thought that quite an apt name, as the human Pharaoh was just about to start chasing after the Hebrew people!

RESEARCH/ADDITIONAL NOTES:
In this scene we can see Moses explaining to Aaron (with Joshua behind him) what the Lord had told him about hardening Pharaoh’s heart. We can see part of the huge camp of the Hebrew people, stretching off into the distance.

How many people were on the Exodus march?
Exodus 12:37-38 (NLT)
‘That night the people of Israel left Rameses and started for Succoth. There were about 600,000 men, plus all the women and children. And they were all traveling on foot. Many people who were not Israelites went with them, along with the many flocks and herds.’

It has been estimated that somewhere around 2 million people (men, women & children; Hebrews & other nationalities) walked out of Egypt during the Exodus.

Location of Pi Hahiroth?
I wanted to find out where “Pi Hahiroth” was, in Egypt, however, it is difficult to be precise about the exact locations of some of the stations or camps of the Hebrew people, during the Exodus. Regarding Pi Hahiroth itself, nothing is known of the meaning of the name. There appears to be no description of the place, so that it is impossible to determine whether the name refers to a city, a citadel/fortress, a natural feature of the landscape, or a region. Whilst some manuscripts in Egypt mention the name, they do not locate the place with any certainty.

The geological map of this part of Egypt (near Suez) shows the area next to the gulf itself to be composed of Wadi & playa*1 deposits (Clay, silt, sand, and some evaporites.) The near by hills appear to be clastics*2, gypsum & carbonate rocks, above Nubia sandstone.

The hills (to the left of the scene I have drawn) are part of the Red Sea Hills, which run from near Suez to the Sudanese border. They are not a continuous range & are geologically complex, with ancient igneous and metamorphic rocks. These include granite that, in the neighbourhood of Aswān (where the now famous dam was built), extends across the Nile valley to form the First Cataract—that is, the first set of rapids on the Nile river.

*1 Playa Deposits. Water-lain deposits are made up of material washed down canyons into low-lying areas after sudden storms. As these fast-flowing rivers of mud, sand, and boulders slow down, they rapidly deposit material to form alluvial fans. Water carries finer silt and mud further onto the lowland areas, where it settles out in temporary lakes called playas. As the water evaporates, dissolved mineral salts are left behind to form salt pans. (source: http://www.geolsoc.org.uk/gsl/education/resources/rockcycle/page3606.html)

*2 There are three basic types of sedimentary rocks, one of which is called “clastic sedimentary” such as breccia, conglomerate, sandstone and shale, that are formed from mechanical weathering debris. The other 2 being “chemical sedimentary” & “organic sedimentary” rocks.


Bible Doctrine Notes
14:1-15:18 REVELATION, History (3.21N)
Historical actions are the central points of God’s revelation. In unique historical acts God showed that He is more than a philosophical idea. The Exodus is the Old Testament parallel to the cross and the empty cave in the New Testament. God has power to deliver his people in their time of greatest need. God introduced his power, sovereignty and commitment to His people, in historical actions for which He had selected chosen interpreters. Egypt responded by refusing to acknowledge Him as God and died, whilst Israel responded in faith and praise and gained freedom and a new identity. Crossing the sea showed that God had power over history, human armies and nature.

14:4 HISTORY, Universal (3.32F)
God introduced Himself to the Egyptians, and revealed His universal power to them, through the Exodus. God works through history to reveal who He is and to call us to be His people.

14:4 EVANGELISM, Glory to God (6.12B)
Evan as God judges a people who reject His grace and offer of salvation, He brings glory to Himself.