Bible Cartoon: Exodus 10 - The Ten plagues of Egypt - The plague of locusts 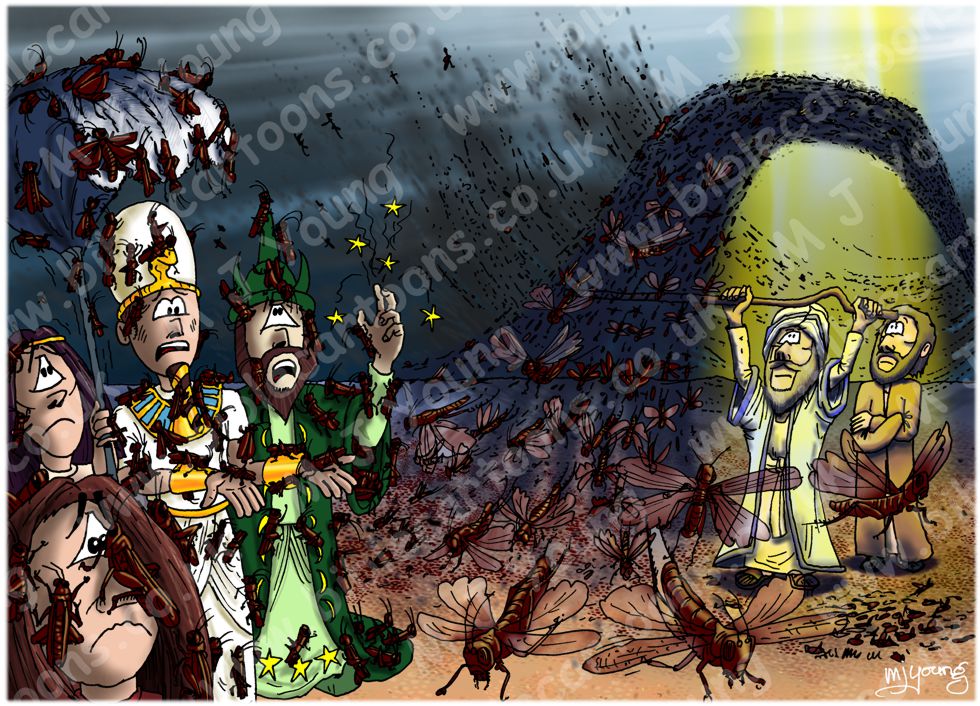 Exodus 10:1-20 (ANIV)
1 Then the Lord said to Moses, “Go to Pharaoh, for I have hardened his heart and the hearts of his officials so that I may perform these miraculous signs of mine among them 2 that you may tell your children and grandchildren how I dealt harshly with the Egyptians and how I performed my signs among them, and that you may know that I am the Lord.”
3 So Moses and Aaron went to Pharaoh and said to him, “This is what the Lord, the God of the Hebrews, says: ‘How long will you refuse to humble yourself before me? Let my people go, so that they may worship me. 4 If you refuse to let them go, I will bring locusts into your country tomorrow. 5 They will cover the face of the ground so that it cannot be seen. They will devour what little you have left after the hail, including every tree that is growing in your fields. 6 They will fill your houses and those of all your officials and all the Egyptians—something neither your fathers nor your forefathers have ever seen from the day they settled in this land till now.’ “ Then Moses turned and left Pharaoh.
7 Pharaoh’s officials said to him, “How long will this man be a snare to us? Let the people go, so that they may worship the Lord their God. Do you not yet realise that Egypt is ruined?”
8 Then Moses and Aaron were brought back to Pharaoh. “Go, worship the Lord your God,” he said. “But just who will be going?”
9 Moses answered, “We will go with our young and old, with our sons and daughters, and with our flocks and herds, because we are to celebrate a festival to the Lord.”
10 Pharaoh said, “The Lord be with you—if I let you go, along with your women and children! Clearly you are bent on evil. [1] 11 No! Let only the men go; and worship the Lord, since that’s what you have been asking for.” Then Moses and Aaron were driven out of Pharaoh’s presence.
12 And the Lord said to Moses, “Stretch out your hand over Egypt so that locusts will swarm over the land and devour everything growing in the fields, everything left by the hail.”
13 So Moses stretched out his staff over Egypt, and the Lord made an east wind blow across the land all that day and all that night. By morning the wind had brought the locusts; 14 they invaded all Egypt and settled down in every area of the country in great numbers. Never before had there been such a plague of locusts, nor will there ever be again. 15 They covered all the ground until it was black. They devoured all that was left after the hail—everything growing in the fields and the fruit on the trees. Nothing green remained on tree or plant in all the land of Egypt. 16 Pharaoh quickly summoned Moses and Aaron and said, “I have sinned against the Lord your God and against you. 17 Now forgive my sin once more and pray to the Lord your God to take this deadly plague away from me.”
18 Moses then left Pharaoh and prayed to the Lord. 19 And the Lord changed the wind to a very strong west wind, which caught up the locusts and carried them into the Red Sea. [2] Not a locust was left anywhere in Egypt. 20 But the Lord hardened Pharaoh’s heart, and he would not let the Israelites go.

TIME OF DAY:
‘By morning the wind had brought the locusts…’

LIGHTING NOTES:
The sun lights this scene, a pale blue/white light, coming from the top right. There is also a yellow heavenly glow surrounding Moses (in blue) & Aaron (in brown) in the scene

CHARACTERS PRESENT:
Moses & Aaron are on the right of Pharaoh (in white.) One of Pharaoh’s magicians is with him – pleading with him to let the Hebrew people go. Together with the ostrich feather fan waving slave girl, we have seen the green clad magician in previous plague pictures. There is an Egyptian woman with locusts crawling on her face, in the left foreground.

RESEARCH/ADDITIONAL NOTES:
The devastation caused by the locust plague was beyond imagination; their numbers were so massive that the ground was black (verse 15). The whole of Egypt was affected. Plagues of the desert locust (Schistocerca gregaria) have threatened agricultural production in Africa, the Middle East, and Asia for centuries.

As noted in previous plague scenes, the “gods” of Egypt were powerless to intervene & prevent the plagues sent by the Hebrew God. Two more of Egypt’s “deities” were powerless to intervene on this occasion: Osiris, god of crop fertility, could not prevent the destruction of the crops, whilst Nut, the Egyptian sky goddess, could not control these locusts either. Once again we can only conclude that the Egyptian “gods” could not stand against the one true God of the Hebrew people.

This scene has taken a long time to complete. The drawing took a lot longer than usual, due to the complexity & shear number of locusts that had to be drawn. The colouring process also took longer than usual, for the same reason. I was pleased with the final locust swarm effect; it looks quite 3 dimensional as the swarm flows into the scene. 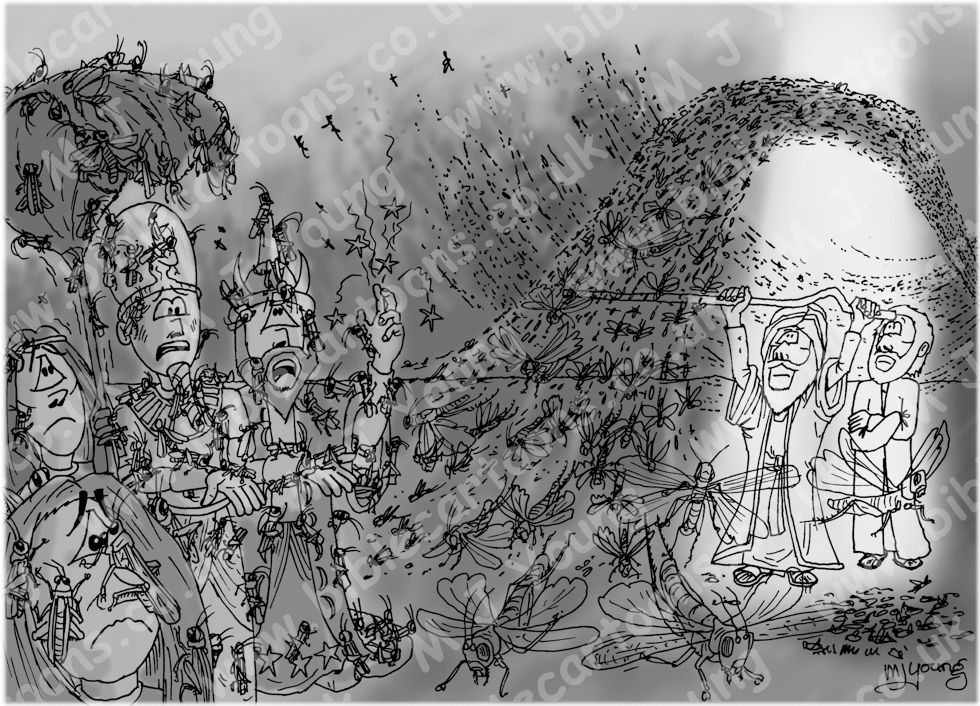 Exodus 09 – the ten plagues of Egypt – Plague of locusts greyscale


Bible Doctrine Notes
10:1-2 HISTORY, Confession (3.35C)
God’s mighty acts of salvation are not performed in every generation, rather it is the responsibility of each generation to share historical memories with the next one. This confession keeps God’s powerful acts alive and helps each generation to know God.

10:2 EDUCATION, Moses (5.72B)
The Old Testament is full of Israel’s strong educational tradition. Even before the Exodus, God was informing Moses of the importance of telling future generations the story of God’s might acts. What God does in one generation should be passed on to the next generation as part of their spiritual heritage.

10:3-7 EVANGELISM, Judgement (6.14B)
Whilst being gracious, loving and patient, God also has to judge rebellion and sinfulness in people. Those who refuse God’s salvation and stubbornly reject His will inevitably suffer His judgement. Their lives result in ruin.

10:17-18 SALVATION, Forgiveness (4.26C)
God forgave Pharaoh’s sin when Moses asked him to in prayer. God will forgive us our sins if we ask Him too.