Bible Cartoon: Exodus 09 - The Ten plagues of Egypt - The plague of hail (Version 01) 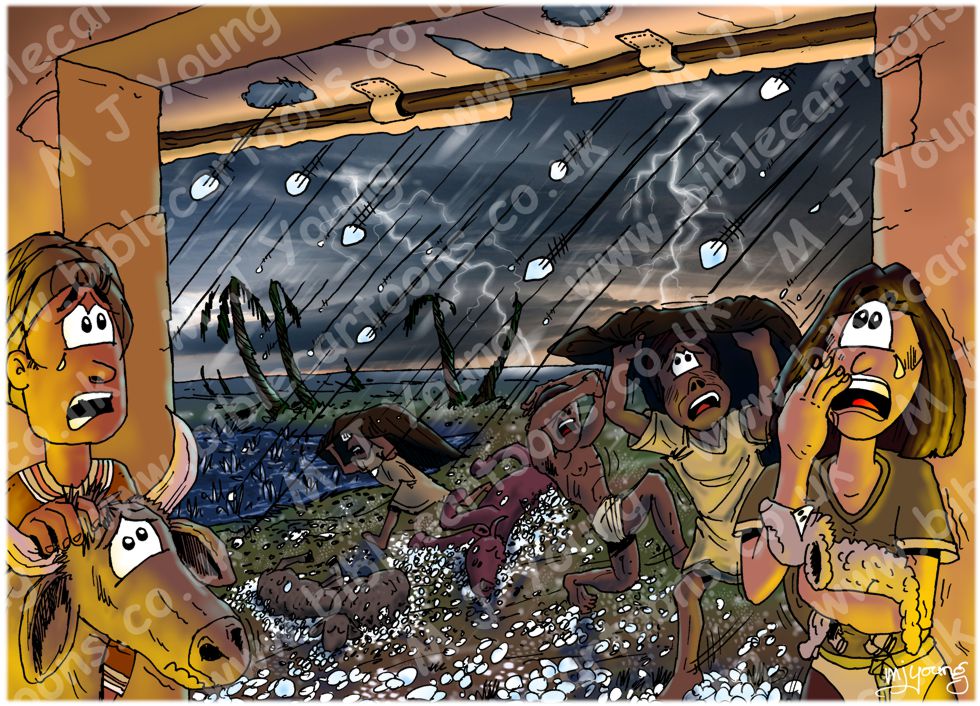 Exodus 9:13-35 (ANIV)
13 Then the Lord said to Moses, “Get up early in the morning, confront Pharaoh and say to him, ‘This is what the Lord, the God of the Hebrews, says: Let my people go, so that they may worship me, 14 or this time I will send the full force of my plagues against you and against your officials and your people, so you may know that there is no-one like me in all the earth. 15 For by now I could have stretched out my hand and struck you and your people with a plague that would have wiped you off the earth. 16 But I have raised you [1] up for this very purpose, that I might show you my power and that my name might be proclaimed in all the earth. 17 You still set yourself against my people and will not let them go. 18 Therefore, at this time tomorrow I will send the worst hailstorm that has ever fallen on Egypt, from the day it was founded till now. 19 Give an order now to bring your livestock and everything you have in the field to a place of shelter, because the hail will fall on every man and animal that has not been brought in and is still out in the field, and they will die.’ “

20 Those officials of Pharaoh who feared the word of the Lord hurried to bring their slaves and their livestock inside. 21 But those who ignored the word of the Lord left their slaves and livestock in the field. 22 Then the Lord said to Moses, “Stretch out your hand towards the sky so that hail will fall all over Egypt—on men and animals and on everything growing in the fields of Egypt.”
23 When Moses stretched out his staff towards the sky, the Lord sent thunder and hail, and lightning flashed down to the ground. So the Lord rained hail on the land of Egypt; 24 hail fell and lightning flashed back and forth. It was the worst storm in all the land of Egypt since it had become a nation. 25 Throughout Egypt hail struck everything in the fields—both men and animals; it beat down everything growing in the fields and stripped every tree. 26 The only place it did not hail was the land of Goshen, where the Israelites were.

27 Then Pharaoh summoned Moses and Aaron. “This time I have sinned,” he said to them. “The Lord is in the right, and I and my people are in the wrong. 28 Pray to the Lord, for we have had enough thunder and hail. I will let you go; you don’t have to stay any longer.”
29 Moses replied, “When I have gone out of the city, I will spread out my hands in prayer to the Lord. The thunder will stop and there will be no more hail, so you may know that the earth is the Lord’s. 30 But I know that you and your officials still do not fear the Lord God.”
31 (The flax and barley were destroyed, since the barley was in the ear and the flax was in bloom. 32 The wheat and spelt, however, were not destroyed, because they ripen later.)
33 Then Moses left Pharaoh and went out of the city. He spread out his hands towards the Lord; the thunder and hail stopped, and the rain no longer poured down on the land.
34 When Pharaoh saw that the rain and hail and thunder had stopped, he sinned again: He and his officials hardened their hearts. 35 So Pharaoh’s heart was hard and he would not let the Israelites go, just as the Lord had said through Moses.

TIME OF DAY:
It would be difficult to determine the time of day, due to the dark, stormy sky. However, verse 13 tell us that the Lord said to Moses, “Get up early in the morning…” & then in verse 18 it says “…at this time tomorrow…” therefore we can deduce that it is early morning.

CHARACTERS PRESENT:
We can see two wise Egyptians in the foreground, holding on to their animals (a cow & a lamb), sheltering in a house. There are three unwise Egyptians outside, in the hail storm. I imagined that the man in the loincloth is probably a slave, left to toil in the fields. The other two could be slaves or Egyptian farmers. Notice they are holding robes or sacks above their heads, to try to keep the hail stones from hitting them.
In addition there are two dead sheep & a dead cow, brought down by the large hail stones.

RESEARCH/ADDITIONAL NOTES:
There are two versions of this scene:
01) (Previous page) Exodus 09 – The Ten plagues of Egypt – The plague of Hail (Version 01). This is the original version, with bare chested Egyptian man.

02) (This page) Exodus 09 – The Ten plagues of Egypt – The plague of Hail (Version 02). This is the newer, more modest version (specifically requested by a customer) which covers up the bare chested man in the scene.

We know from verse 20 that there were “some officials of Pharaoh who feared the word of the Lord,” & that they “hurried to bring their slaves and their livestock inside.” The 2 figures in the foreground, cowering in the house are representative of these wiser Egyptians.
Verse 21 tells us, “But those who ignored the word of the Lord left their slaves and livestock in the field.” Hence I have depicted what happened to these people & animals, once the hail storm hit.

I have discovered the approximate location of the land of Goshen (which is where the Bible tells us the Hebrew people lived in Egypt) & found that it is very flat location. Ordinarily I’d like to add hills &/or mountains to the scene, but Goshen was pretty flat!

This is the first of the ten plague scenes in which I have not depicted either Moses & Aaron, or Pharaoh & his courtiers.

We know that the storm was terrible, as verses 23-25 say, “… the Lord sent thunder and hail, and lightning flashed down to the ground. So the Lord rained hail on the land of Egypt; hail fell and lightning flashed back and forth. It was the worst storm in all the land of Egypt since it had become a nation. Throughout Egypt hail struck everything in the fields—both men and animals; it beat down everything growing in the fields and stripped every tree.”

Notice the Nile tributary that you can see in the middle distance. The hail stones are splashing the water up into a frenzy. That’s the kind of detail I like to include in my cartoon illustrations! 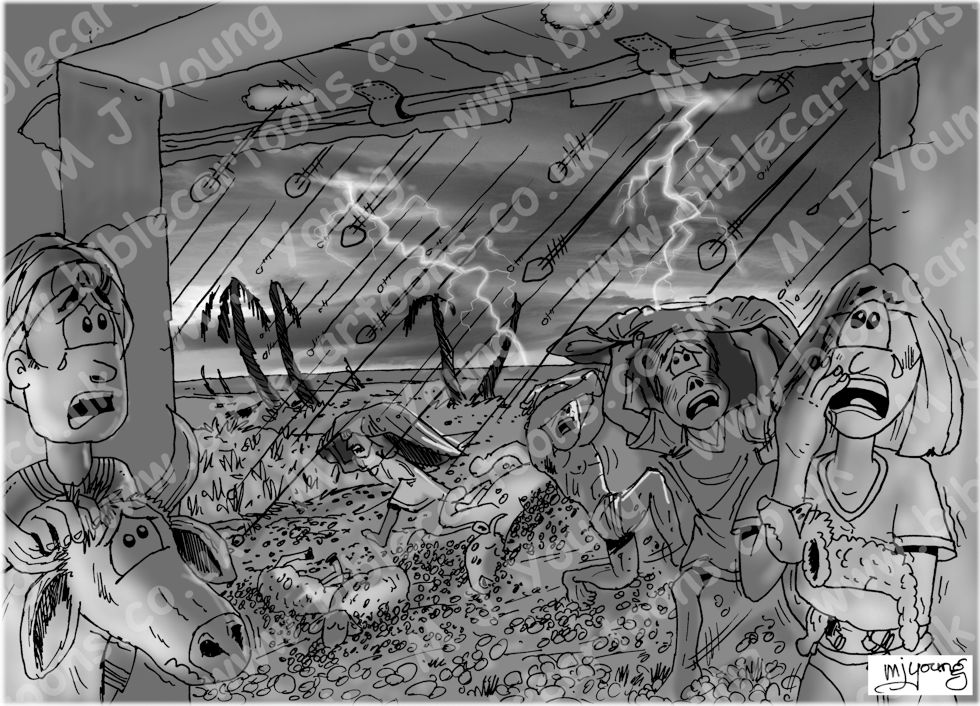 Exodus 09 – the ten plagues of Egypt – Plague of hail greyscale


Bible Doctrine Notes
9:16 HISTORY, Universal (3.32F)
God seeks to introduce Himself and His power to all people, not just to a chosen few. In verse 9:20 we see that God honoured those Egyptians who chose to trust His warning, as well as the Israelites.

9:16 MISSIONS, Authority (6.23C)
God raised up Pharaoh in order to demonstrate His power. The Egyptian’s believed their Pharaoh to be a god, but the plagues and Exodus events proved that only the true God of Israel possesses divine power. God’s deeper purpose in the Exodus was to declare His name throughout all the earth. Christian mission authority on earth comes from the knowledge that God wants His name, love and power declared to all the earth. God is the God of the whole earth, He is not a tribal god, nor is He limited to a geographic region on earth. God acts in ways that all people everywhere might come to know Him.

9:20,25,30 EVANGELISM, Lostness (6.13A)
People who do not trust and love God, and who ignore His invitation to get to know Him through the Bible, loose everything. They are lost to joy, happiness, to the good things in life, and to God Himself. Such lostness is the greatest of human tragedies and should inspire Christians to share their faith about the dangers of ignoring God’s Word and refusing to have Jesus the Christ in their lives.

9:27 GOD, Righteous (1.14D)
Pharaoh finally began to see that he and the Egyptians were sinners, and in the wrong, and that God and the Hebrew people were in the right: righteous. Although Pharaoh correctly interpreted the plagues as God’s judgement on Egypt, he was only temporarily willing to yield to Moses and God. That God is in the right and thus righteous becomes evident even to God’s enemies.

8:33 PRAYER, Will of God (5.52B)
Prayer is God means of executing His will on earth. The 10 plagues came at the initiative of God, whilst their cessation came as an answer to Moses’ prayers.

9:34 SIN, Rebellion (2.53F)
Pharaoh’s sin was that of rebellion against God’s directives, which were delivered by his representative, Moses. After many of the plagues Pharaoh seemed to bend somewhat towards God’s will, but in the end he stiffened his will against God. After the plague of hail, Pharaoh changed his mind once more, and rebelled again against God. By “hardening his heart” Pharaoh deliberately set his will against that of God. Rebellion against God’s will is always sin, in every generation.
When people deliberately choose to rebel against God’s will, no power of earth can alter their mindset. Freedom of choice is a gift from God: in His sovereign power He has given us the right to rebel against His will. In Pharaoh’s case God gave him repeated chances to change his mind and soften his own heart towards God, but on each occasion he refused. People can ignore the Holy Spirit’s pleadings until their hearts become so hardened against the will of God that is may appear to them that the divine pleading has stopped. In reality the problem rests with the person. See Romans 1:26-32.