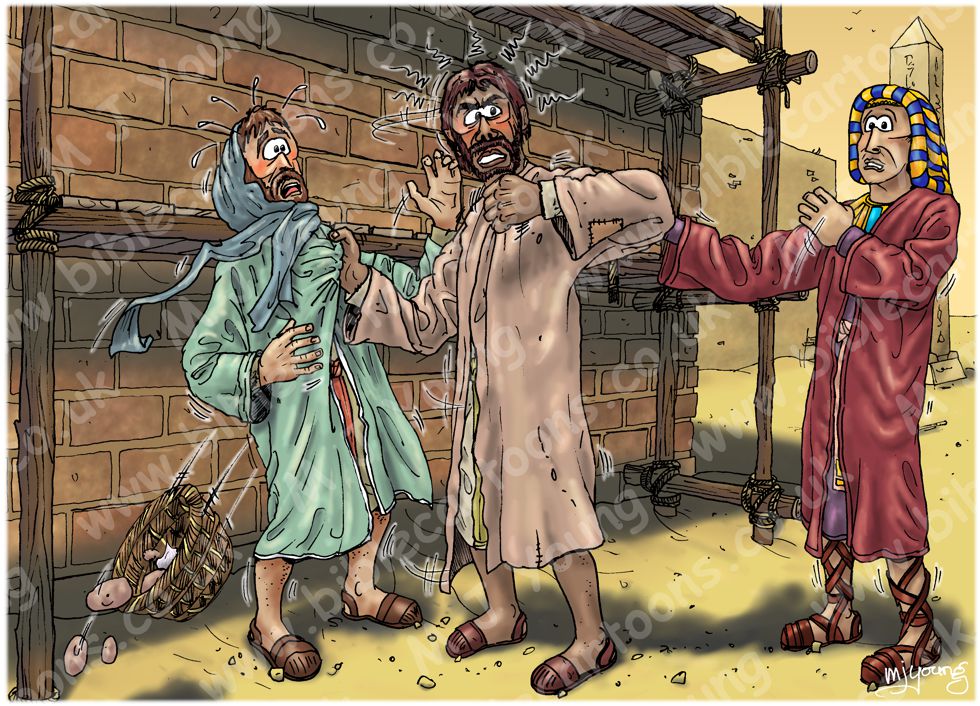 Exodus 2:13-14 (ANIV)
The next day he went out and saw two Hebrews fighting. He asked the one in the wrong, “Why are you hitting your fellow Hebrew?”
The man said, “Who made you ruler and judge over us? Are you thinking of killing me as you killed the Egyptian?” Then Moses was afraid and thought, “What I did must have become known.”

TIME OF DAY:
The Bible simply states it was daytime. I have made it late morning.

LIGHTING NOTES:
The sun is overhead, casting shadows to the right of figures and objects.

CHARACTERS PRESENT:
On the left are the two Hebrew men, fighting. On the right is Moses.

RESEARCH/ADDITIONAL NOTES:
I deliberately made the background of this scene similar to the previous one (Exodus 02 – Moses murders – Scene 02 – Moses kills Egyptian) so that a sense of continuity is maintained between the scenes of this story. Both scenes have wooden scaffolding, ropes, brick walls, sand, etc to establish that the action is occurring in similar places. I have also drawn Moses in the same clothing he appears in, in the previous scene, to further add to the continuity between scenes.

I enjoyed drawing the angry man in the middle of the scene, who likes like he is about to punch the other guy! I’ve given him a red face, cross expression and threatening posture, so it’s clear what he is about to do! The other man is looking scared/terrified, and is dropping his basket of food.

I wanted to draw Moses looking as if he is intervening (by his hand on the middle man’s arm) but also with an expression of alarm, as he is thinking “What I did must have become known.”

Shortly after this scene the Bible tells us that Moses goes on the run, off into Midian.