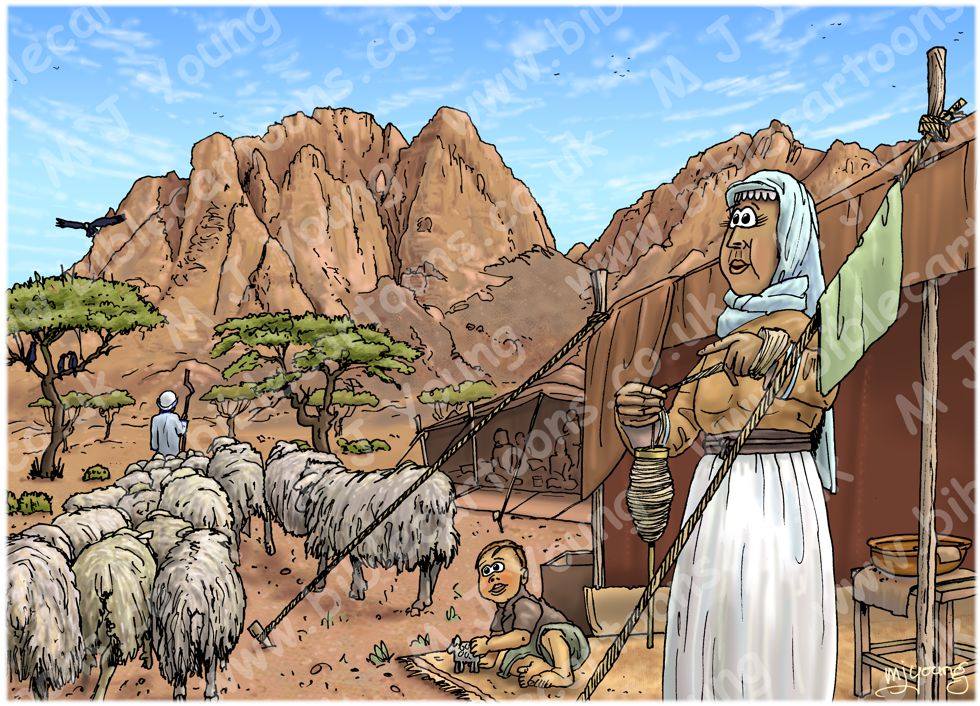 Exodus 2:21-25 (ANIV)
21 Moses agreed to stay with the man, who gave his daughter Zipporah to Moses in marriage. 22 Zipporah gave birth to a son, and Moses named him Gershom, [1] saying, “I have become an alien in a foreign land.”
23 During that long period, the king of Egypt died. The Israelites groaned in their slavery and cried out, and their cry for help because of their slavery went up to God. 24 God heard their groaning and he remembered his covenant with Abraham, with Isaac and with Jacob. 25 So God looked on the Israelites and was concerned about them.

[1]
Gershom sounds like the Hebrew for an alien there.

TIME OF DAY:
Not specified in Bible. I have set this scene in the mid morning.

LIGHTING NOTES:
Diffused sunlight from the right illuminates this scene.

CHARACTERS PRESENT:
Moses walking off with a flock of sheep. Zipporah (the wife of Moses) standing in the entrance to their tent, with the baby Gershom playing near her feet.
Other people in a tent, probably Zipporah’s family..
Sheep.

RESEARCH/ADDITIONAL NOTES:
Originally I was going to draw the wedding day of Moses and Zipporah to represent this scene. Then I thought of adding Gershom, since he is mentioned in the narrative, which led me to this scene, depicting Moses as a family man; shepherd, husband and father. The viewer sees Moses settled life from the point of view of his wife (Zipporah) watching Moses lead their flock of sheep towards new pastures. Zipporah is spinning wool into thread by hand.

Moses’ son Gershom is playing on the ground with a carved wooden sheep toy.

In the background you can see Mount Sinai.

01) The trees through which Moses is passing are Umbrella Thorn Acacia (aka umbrella thorn, karamoja and Israeli babool, Acacia tortilis).
A medium to large canopied tree native primarily to the savanna and Sahel of Africa (especially Sudan), but also occurring in the Middle East. In extremely arid conditions, it may occur as a small, wiry bush. It grows up to 69 ft (21 metres) high. It tolerates drought, wind, salinity and a wide range of soil types. The bark is grey to black in colour and has a rough texture. The tree has a combination of one straight, thin thorn with a small hooked thorn alongside, growing in pairs. The flowers form in clusters on old wood, and are creamy, white balls. The pods are a distinctive pale gold brown colour and are curled and twisted. The leaves are very small giving the umbrella a soft, feathery appearance.

02) The low scrubby bushes below the Acacias are Zygophyllum coccineum L. The generic name is derived from the Greek words ζυγόν (zygon), meaning “yoke,” and φυλλον (phyllon), meaning “leaf.” It refers to the leaves, each of which have two leaflets. This plant is widely distributed in arid and semi-arid regions of Africa, the Mediterranean Basin, central Asia and Australia.


Bible Doctrine Notes
2:23-25 GOD, Righteous (1.14D)
Because God is Himself righteous, he comes to aid of the victims of suffering and injustice. The righteous God remembered His covenant promise to Abraham and his descendants. God’s “concern” for the Israelites was no passing observation, it was expressed concretely as God initiated their deliverance from Egyptian slavery.

2:23-25 EVIL AND SUFFERING, God’s Compassion (2.33C)
God is aware of all our sufferings’ w are not alone in them. God identified with the Hebrew people’s slavery and suffering. His empathy with our situation leads to His direct involvement with us, and to our eventual liberation, although that may only fully come in the resurrection.

2:24 THE CHURCH, Covenant People (5.11A)
God’s people are never alone, nor are they forgotten. God’s covenant promises transcend geographical boundaries and human limitations. In His own way and His own timescale, God remembers His people. Years may pass and circumstances may change, but God’s steadfast love endures forever.