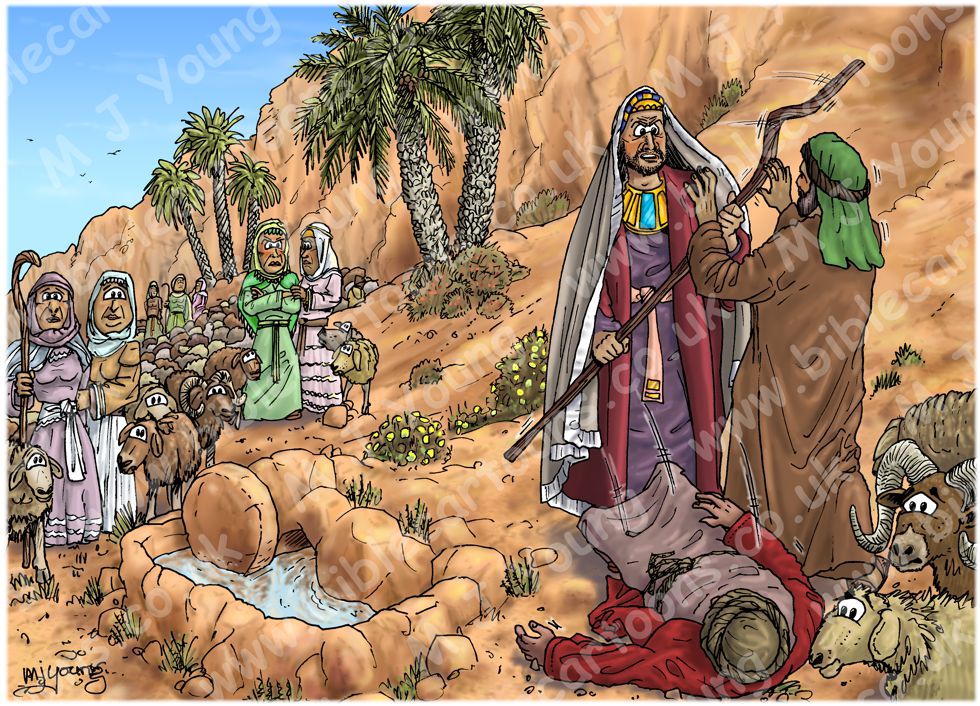 Exodus 2:15-20 (ANIV)
15 [When Pharaoh heard of this, he tried to kill Moses, but Moses fled from Pharaoh and went to live in Midian,] where he sat down by a well. 16 Now a priest of Midian had seven daughters, and they came to draw water and fill the troughs to water their father’s flock. 17 Some shepherds came along and drove them away, but Moses got up and came to their rescue and watered their flock.
18 When the girls returned to Reuel their father, he asked them, “Why have you returned so early today?”
19 They answered, “An Egyptian rescued us from the shepherds. He even drew water for us and watered the flock.”
20 “And where is he?” he asked his daughters. “Why did you leave him? Invite him to have something to eat.”

TIME OF DAY:
Unspecified in the Bible narrative above. I have set the time as being mid afternoon.

LIGHTING NOTES:
Sunlight from above.

CHARACTERS PRESENT:
Moses. Two shepherds. Seven daughters of Reuel, the priest of Midian, including Zipporah (later to be wife of Moses).
Lots of sheep.

RESEARCH/ADDITIONAL NOTES:
In this scene Moses is fighting two shepherds, in defence of the seven daughters of Reuel, the priest of Midian. Later on Moses waters the girls flocks. Notice that Moses is wielding a staff he has picked up. It is the same staff he has in all the remaining scenes, including the 10 plagues of Egypt, that follow.

Notice that I still have Moses wearing his Egyptian clothing, beneath a blanket bought in the previous scene (Exodus 02 – Moses flees to Midian – Scene 01 – Leaving home).

Notice also that one of the daughters of Reuel (wearing green) is looking very cross. No doubt she is rather distainful of the men fighting! I wondered about making her Zipporah, the daughter of Reuel whom Moses marries (see in the next scene and verse 21), but then decided to identify the woman in a white skirt and brown top, on the left of the scene as Zipporah.

I enjoyed drawing the varied expressions of the women, and the sheep for that matter!

Plants in this scene.
01) The trees I the background are date palms (Phoenix dactylifera).

02) The low lying bushes below the palm trees is Thorny Burnet or Prickly Burnet (Sarcopoterium spinosum). It has green flowers, whilst it’s berries are red and very sharp, thin, woody spines. It occurs throughout Israel’s diverse climatic regions: from the The Mediterranean Woodlands and Shrublands, Semi-Steppe shrublands, Shrub Steppes, Deserts & extreme deserts, to Montane vegetation of Mt. Hermon

03) The low, scrubby plant with yellow flowers in the foreground is Clammy cistus, or Thyme Rock Rose (Fumana thymifolia). It is a dwarf shrub, growing up to 20 cm tall. Like Sarcopoterium spinosum, this plant occurs through all of Israel’s various climatic zones.

04) The low lying grass in the foreground is Goat grass (Aegilops peregrina). Aegilops comes from the Greek aegilos (a herb liked by goats, or a goat), with ‘goatlike’ (referring to whiskery-awned spikelets), literally, “goat in the eye”.