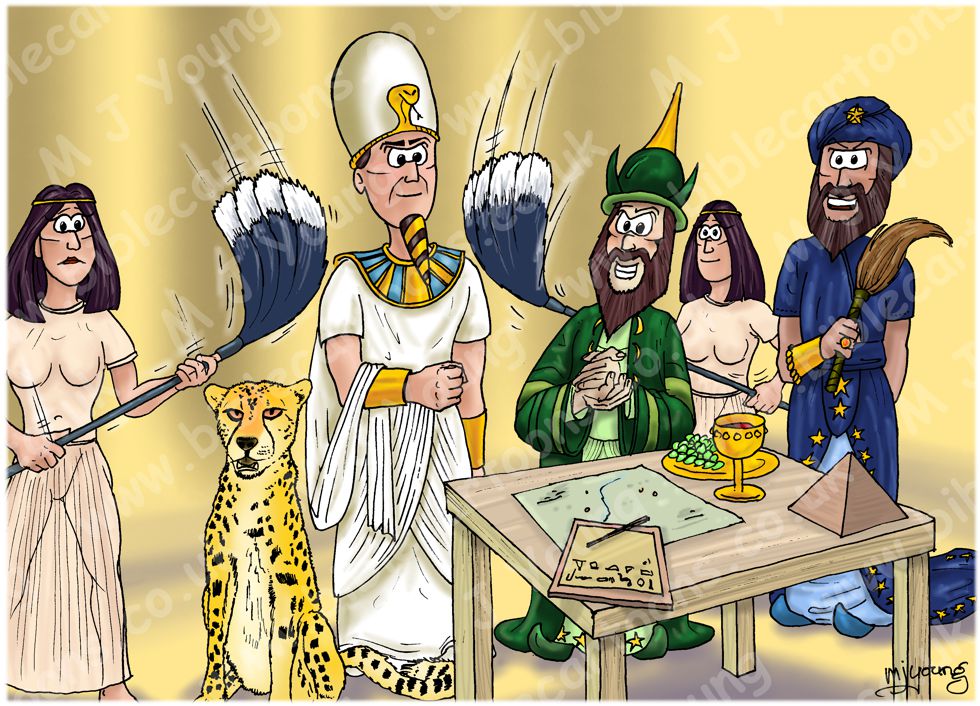 Exodus 1:8-10 (ANIV)
8 Then a new king, who did not know about Joseph, came to power in Egypt. 9 “Look,” he said to his people, “the Israelites have become much too numerous for us. 10 Come, we must deal shrewdly with them or they will become even more numerous and, if war breaks out, will join our enemies, fight against us and leave the country.”

CHARACTERS PRESENT:
Pharaoh (the king of Egypt) is the tall central figure in white.
There are two magicians or wise men (in green & blue) present and two hand maidens/slave girls fanning Pharaoh with Ostrich feather fans.

This is the second scene in this series about the Hebrew oppression that preceded the Exodus out of Egypt. In this picture we can see Pharaoh hatching plans to oppress the Hebrew people, with two of his magicians, or wise men.

The colouring for the figures comes from Exodus 08 – the ten plagues of Egypt – Plague of gnats, which I completed in Dec 2010. I like to take care to use similar colouring, even in scenes that are years apart in design, which aids consistency, even across the years between drawings!


Bible Doctrine Notes
1:8-14 EVIL AND SUFFERING, Human Origin (2.31C)
Much suffering is caused by human greed, injustice and oppression. Mistreatment by other people, and human institutions causes much of our suffering. By respecting human free will, God does not interfere with every national incident to prevent tyrants from gaining power. God controls the direction of history, even if we don’t realise it. God works to liberate the oppressed and create a people of His own.

1:8-2:10 HISTORY, Intentions (3.36C)
No matter how powerful a human ruler may be he can not oppose the will of God. Pharaoh sought to limit Israel’s power and privileges, instead he prepared the way to educate God’s chosen deliverer, Moses.